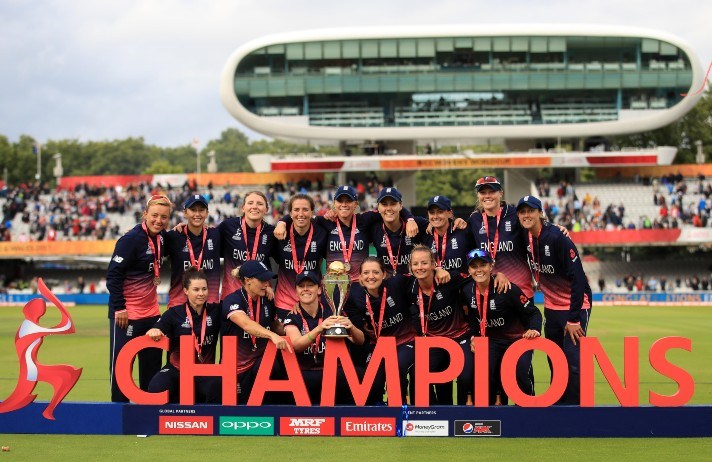 The 2022 Women’s World Cup gets underway in New Zealand on March 3, and Bookmakers.com is here to guide you through the favourites for the trophy and how you can come out on top against some of the best cricket betting sites.

Originally due to be held in February and March 2021 but postponed because of the COVID-19 pandemic, the eight best women’s teams have travelled to New Zealand for a chance to take England’s one-day international crown.

England women’s tense nine-run victory at Lord’s in the UK was played in front of the largest crowd ever in the UK for a women’s cricket match. Looking to defend their crown, Heather Knight’s charges know they will have to beat Australia, New Zealand and a host of others to hold the trophy aloft again on April 3.

This year’s format sees the teams compete in a round-robin group stage with the top four teams at the end of the group stage - where each team plays seven times - moving on to the semi-finals.

The World Cup offers a veritable feast of betting opportunities from pre-game to in-play markets. Futures betting has been available to bettors for a while now, but the closer we get to the tournament, the more we can think of the other potential wagers we can take advantage of.

Before any game starts you will be able to bet on the result of the match, who will win the toss prior to the start, the highest opening partnership from either team, runs scored in the first over, over-under on when the first wicket will fall, the mode of dismissal of the first wicket and many, many more.

Player props will also be available on the number of runs individual players will score and the number of wickets they will take.

Cricket offers in-play opportunities more than most sports because of the natural pauses in between overs and at the fall of wickets. Because of this, there are many betting markets available during a match. These can include the number of runs in the next over, whether a wicket will fall, how many boundaries will be scored for the rest of the innings and much more.

We recommend taking a look at all the best cricket betting sites in order to find the best betting offers for the upcoming tournament. For instance, Australia are the overwhelming favourites to win, but shopping around for better odds could boost your bankroll come the end of the tournament.

It’s unusual to see one team in a tournament of eight be such strong favourites, but Australia’s dismantling of England in the Women’s Ashes prior to the tournament more than justifies their current best price of 1/1.

Despite being the holders, England are just second favourites at a best-price 7/2 with some bookmakers. The hosts New Zealand are the third favourites and will be a lot of people’s dark horses after their impressive 4-1 series win over 2017 finalists India in February. Their current best odds of 10/11 to reach the semi-finals looks very appealing.

Another potential dark horse team are South Africa whose inconsistency has previously held them back. Led by bowlers Marizanne Kapp and one of the fastest women in the world, Shabnim Ismail, they have the batters and bowlers to outperform their 12/1 outright odds at the time of writing.

West Indies have previously once been runners-up in this tournament (2013) and won the World T20 in 2016, but their 20/1 odds reflect where they have been in recent times. The two major outsiders who will be looking to cause upsets are Bangladesh and Pakistan.

When to Bet on the ICC Women’s World Cup

The ICC Women’s World Cup starts at 01:00 (UK time) March 4, so any pre-match wagers will need to be in before that point. The current futures markets with some cricket betting sites available are tournament outrights, teams to reach the semi-final or final, respectively, the top batter in the tournament, top bowler and each team’s top performers.

In-play options will be plentiful for anyone watching along with games, be it on TV or on their smart devices. It starts with the toss and then will continue throughout the match, with people able to place any number of wagers in almost every over of a match.

With some days having more than one game being played, there could be opportunities for parlays, while the bet builder function in betting apps could also offer same game parlay options too.

Given this is a global tournament, customers could expect there to be a number of World Cup-related free bet offers to be available. Be sure to keep checking out the Bookmakers.com betting offers page to ensure you’re up to date on all the available bonuses you could enjoy.

There are sure to be welcome bonuses available to new customers who deposit into their betting account for the first time. These deposit bonuses typically require you to make a qualifying bet, which the betting site will match or give free bets up to a certain amount.

When is the ICC Women’s World Cup?

The ICC Women’s World Cup starts with the hosts New Zealand taking on West Indies at 14:00 local time (01:00 UK time) on March 3. The group stage ends with a double-header of England vs. Bangladesh and India vs. South Africa on March 27 (local time). Semi-finals will then be played on March 30 and March 31 (local time) before the tournament finishes on April 3.

Where Can I Watch the ICC Women’s World Cup?

There are a host of different ways to watch the action in New Zealand. If you’re watching from the UK, you can catch every match on Sky Sports, whereas in the US and Canada you can stream it with a Willow subscription. New Zealand will be showing the tournament on Sky Sports, while Fox Sports has the rights in Australia.

People signing up with bet365 can also watch every match through their betting account as long as it is funded or you have placed a bet within the last 24 hours.

Frequently Asked Questions
When is the ICC Women’s World Cup?

The ICC Women’s Cricket World Cup will run from March 3 (local time) to April 3 in New Zealand. There are eight teams in the tournament, who will play in a round-robin group stage before the top four reach the semi-finals.

Which Team Has Won the Most ICC Women’s World Cups?

This year’s tournament will be the 12th World Cup since the very first in 1973. It has only ever been won by three teams, Australia, England and New Zealand. This tournament’s favourites are Australia, and they have previously won it six times to England’s four.

What is an ODI?

Where Can I Bet on the Women’s Cricket World Cup?

Most bookmakers will have betting markets on the ICC Women’s World Cup, though some will go into more detail than others. Futures markets are currently open at a number of betting sites, while other bookmakers will also include live streaming alongside their in-play betting options such as bet365.

Mark Fordham
@MWFordham
9 Articles
Mark spent over a decade as a sports reporter and editor with Goal.com and Bleacher Report. He is now a Content Editor at Bookmakers.com covering all manner of sports from the Premier League and cricket to the NBA and NFL.
Read Articles