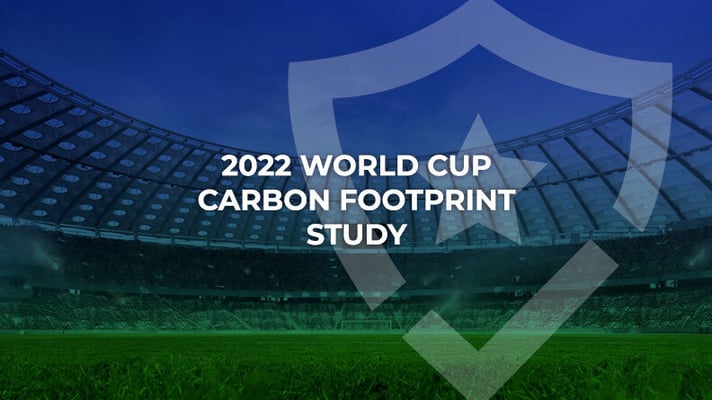 The 2022 World Cup is fast approaching, and soccer fans around the world are eagerly anticipating a December final for the first time in the tournament’s history. The World Cup will undoubtedly be one of the biggest events of the year for both soccer fans and soccer betting sites.

Qatar is the host of the 2022 World Cup, marking the first time the soccer showcase has been hosted in the Middle East. Many climate advocates have raised concerns about the carbon footprint the tournament will cause, despite claims from the host nation that it will be a carbon-neutral event.

While those disputes rumble on, here at Bookmakers, we have taken a look at what the impact of qualifying for the World Cup is. We have measured the distance and CO2 emissions from the flights taken by all 32 teams that will take part in the 2022 World Cup in Qatar. The hosts, to their credit, lead the way in that respect. Qatar did not have to play any World Cup qualifiers, as the hosts automatically get a spot in the tournament.

For our findings, we looked at each team's away fixtures during World Cup qualification and treated each away game as a separate round trip from their capital to the capital of the host team. Flights are assumed to have been on a standard Boeing 737, with each team bringing 50 people with them – to account for players, coaches and other staff.

The Greenest Path to the 2022 World Cup

With a shorter qualifying campaign and away games taking place on a continent that spans a much smaller area of the globe than others, it’s no surprise to see European nations towards the top when it comes to the most eco-friendly route to the World Cup.

Belgium’s away games created just 46.6 tons of CO2 emissions, with Switzerland and Croatia next best. Apart from the hosts, Qatar, who had no qualifiers to play, the 13 teams that created the least amount of CO2 were all European.

African nations were next best, with Cameroon, Morocco, Ghana and Tunisia top from that continent. Although they had longer flights than their European counterparts, they benefitted from having just four qualifiers in order to make it into the field of 32 for the World Cup. 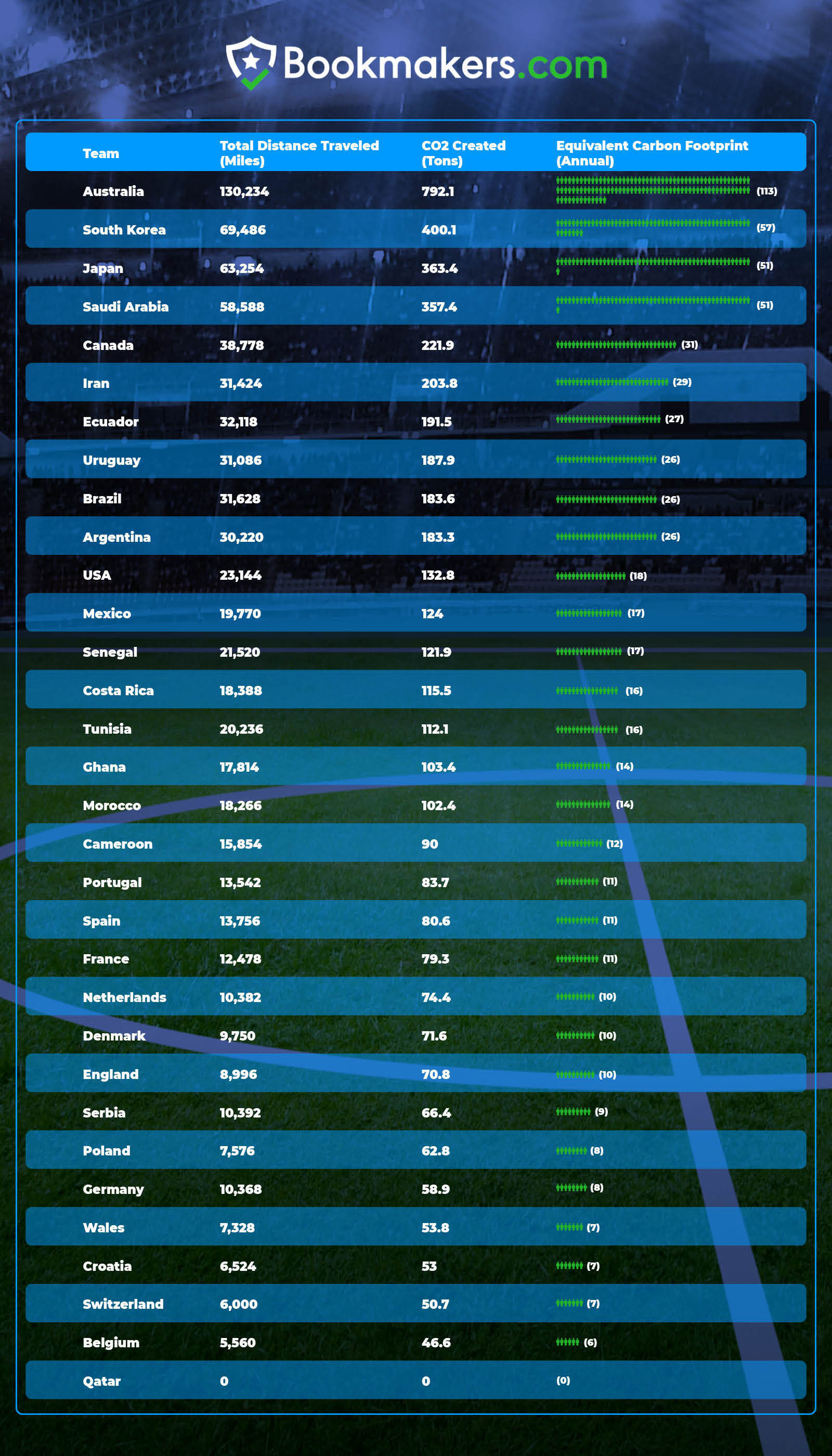 South Korea were next worst, with Japan, Saudi Arabia, Canada and Iran rounding out the bottom six. Although ranking near the bottom, these pale in comparison to Australia’s numbers. They are still mammoth figures, no doubt, but the biggest contributing factor, beyond distance, is the sheer number of qualifiers each team plays.

South American qualifiers occupy the next few spots in the bottom half of the table. Ecuador, Uruguay, Brazil and Argentina were each pencilled in for nine away games throughout their qualifying campaign, creating a combined 746 tons of CO2 in the process.

North and Central American qualifiers USA, Mexico and Costa Rica ranked in the bottom half too. The distance of the flights taken were broadly in line with the European teams towards the top of the CO2 list, but the number of away games played meant more CO2 emissions.

When all qualifiers for all 32 World Cup teams are taken into account, just getting to the World Cup creates approximately 5,000 tons of CO2, from flights to and from away fixtures. And that’s just for the teams that made it. For context, the average carbon footprint for a person is estimated to be seven tons per year.

For every Cameroon, Japan or Netherlands that qualified, there’s a Mozambique, Oman and Hungary that did not. Yet those teams are part of the same qualifying process – clocking up those same air miles, creating similar, if not greater, levels of CO2 in the process. All for an unsuccessful World Cup qualifying campaign.

Is it time to shake up World Cup qualifiers? Would a qualification tournament, similar to the World Cup itself, be a better approach? Rather than spreading games over a two-year span, maybe all teams trying to get to a World Cup could get together and play a series of games in a single country over a two-month span, similar to a World Cup, with the 32 teams that get in decided that way.

This would be a great spectacle for soccer fans and those visiting soccer betting apps. It would also certainly be much friendlier to the planet, as it would involve just one round trip per team, instead of the eight, nine or sometimes 10.

Not to single out Australia again, but can it be justified that a team creates as much CO2 for their qualifiers as is created by over 100 people in a year? This is a team that, with all due respect, probably doesn’t have much of a shot of winning, having appeared in five previous World Cups, winning two games from 16. Australia currently has odds of up +25000 with some World Cup betting sites.

Whether we get a carbon-neutral World Cup is very much up for debate. Of course, let’s all hope we do. But the effects on the planet of simply making it to the World Cup and indeed all of the failed attempts at qualification shouldn’t be forgotten.

At a time in the world when everyone is being asked to do their part for the planet, maybe it’s time soccer did too. We love seeing smaller teams at the World Cup. They add something huge to the tournament, and the possibility of a huge upset is why many people tune in. But there’s surely a better way, from a climate perspective, to determine World Cup qualification. Each of the teams that produced over 200 tons of CO2 for their away qualification games are available at pre-tournament odds of 100/1 or bigger, meaning they each have an implied chance of less than 1% of World Cup glory. They've no doubt earned their way into the tournament, but given the carbon footprint created along the way, is it worth it in the grand scheme of things?

If FIFA plans to address climate change as much as it should, then maybe World Cup qualifiers would be a good place to start.