A Master Stroke: Which Golfers Have Earned the Most from the Masters? 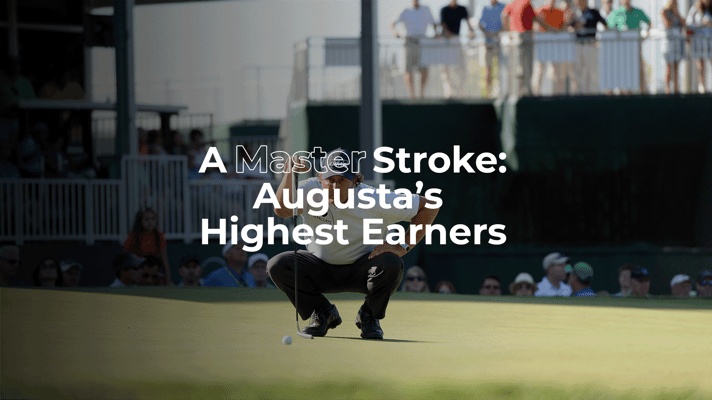 The Masters is perhaps the most prominent and prestigious event in the golfing calendar, with competitors battling it out for the green jacket that earns them lifelong glory – and a combined $11.5 million in prize money. And with the latest edition just around the corner, we’re sure to see an exhibition of immense quality on the course as well as some of the off the course. But which players to have featured at the Masters have earned the most during their time competing in the tournament?

Analyzing historical data, we’ve revealed those who have earned the most per shot at the Masters, which of this year’s favorites have picked up the most money per stroke, which previous champions have earned the most from the tournament and which winning years saw the greatest earnings per shot. 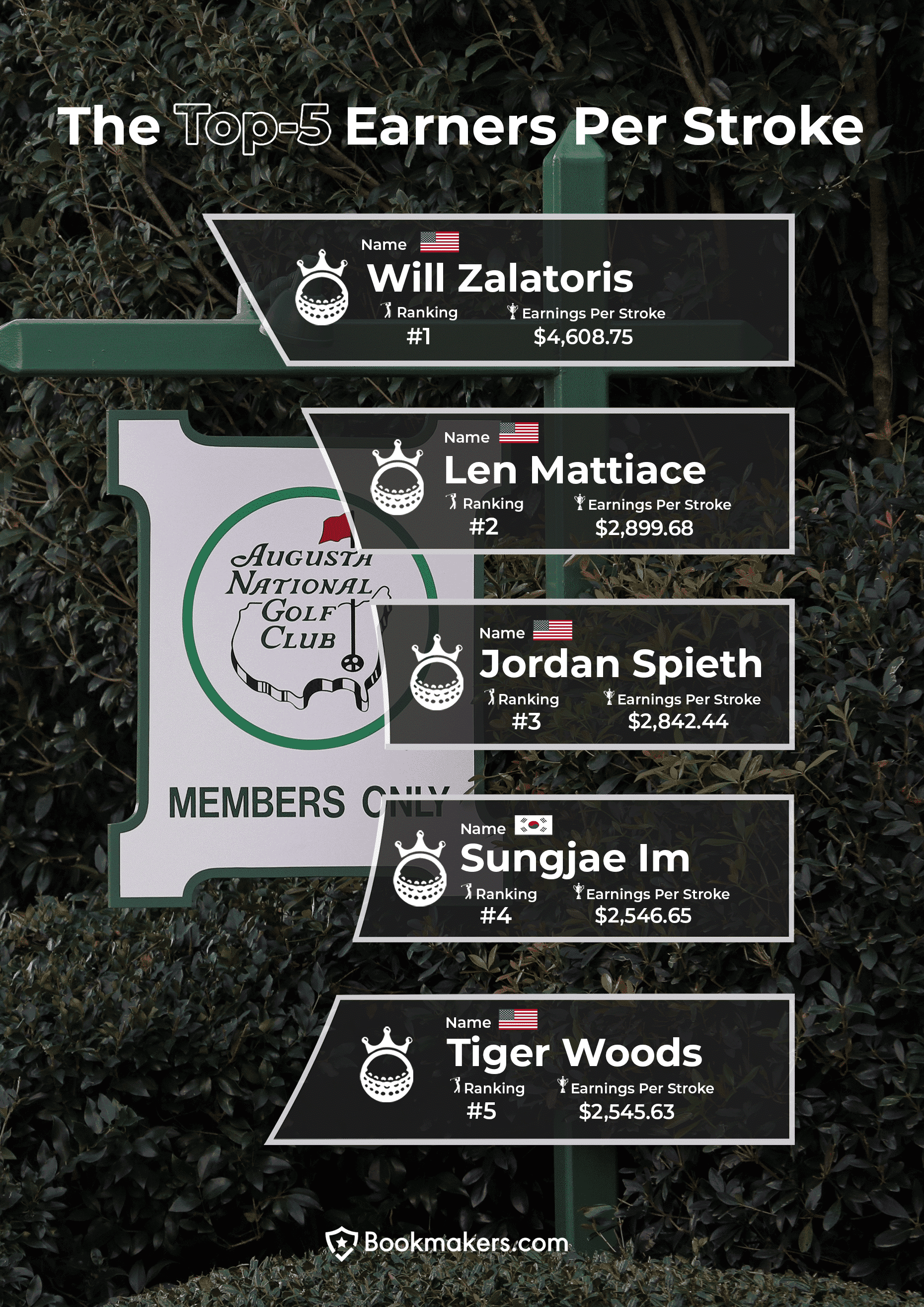 Which Golfers Have Earned the Most Per Shot at the Masters?

Looking at the overall top-20 earners, nobody’s made more money per Masters golf shot than Will Zalatoris. The 25-year-old made his Masters debut in 2021, making an immediate impact on his route to finishing second - and picking up $4,609 for each stroke. 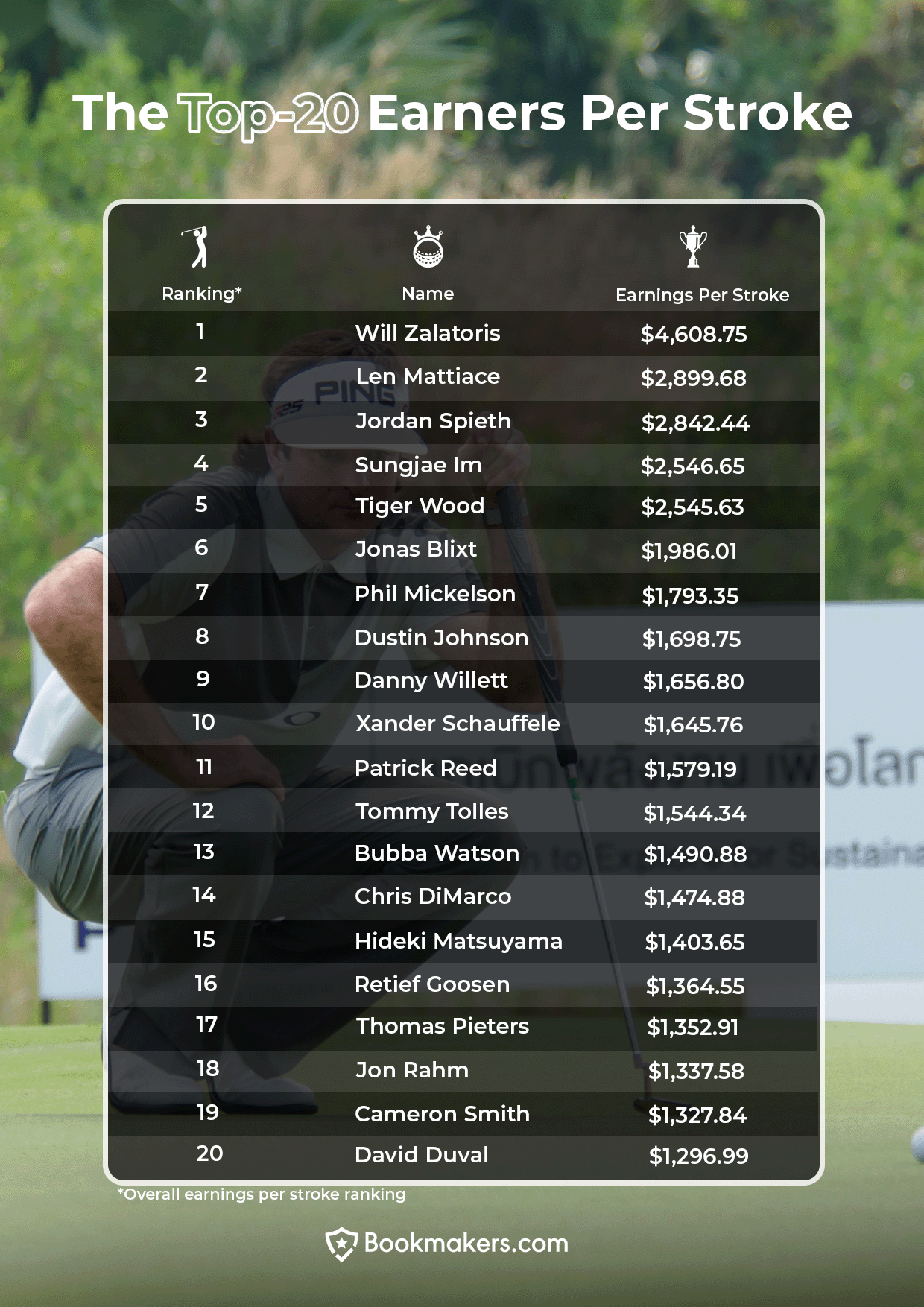 Which of the 2022 Favorites Have Earned the Most Money Per Shot?

Turning our attention to the top-20 favorites for this year’s Masters tournament, Zalatoris once again tops the chart. His $4,609 is unmatched, with Spieth ($2,842) and Im ($2,547) his closest chasers. 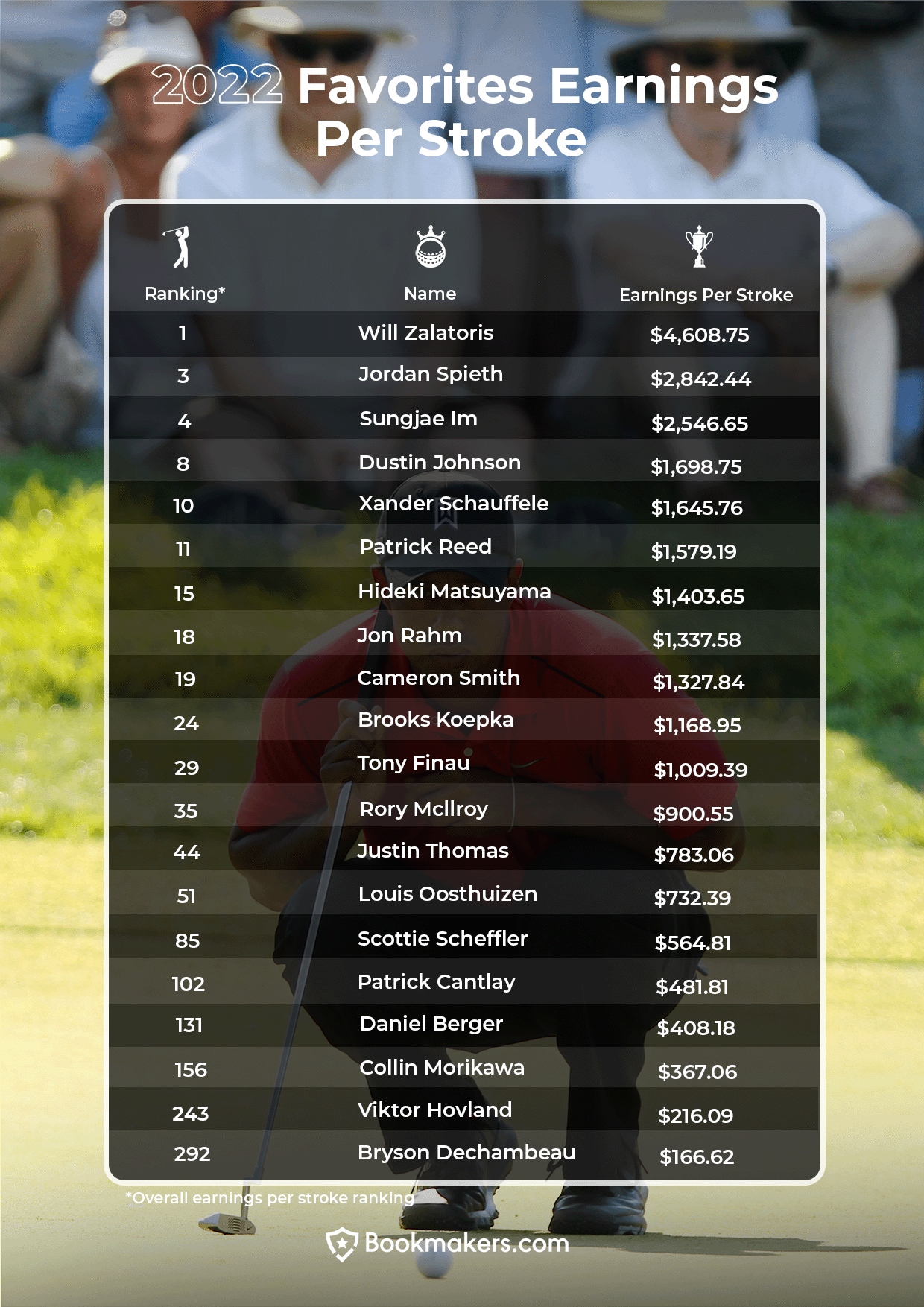 Which Masters Champions Have Earned the Most Per Shot? 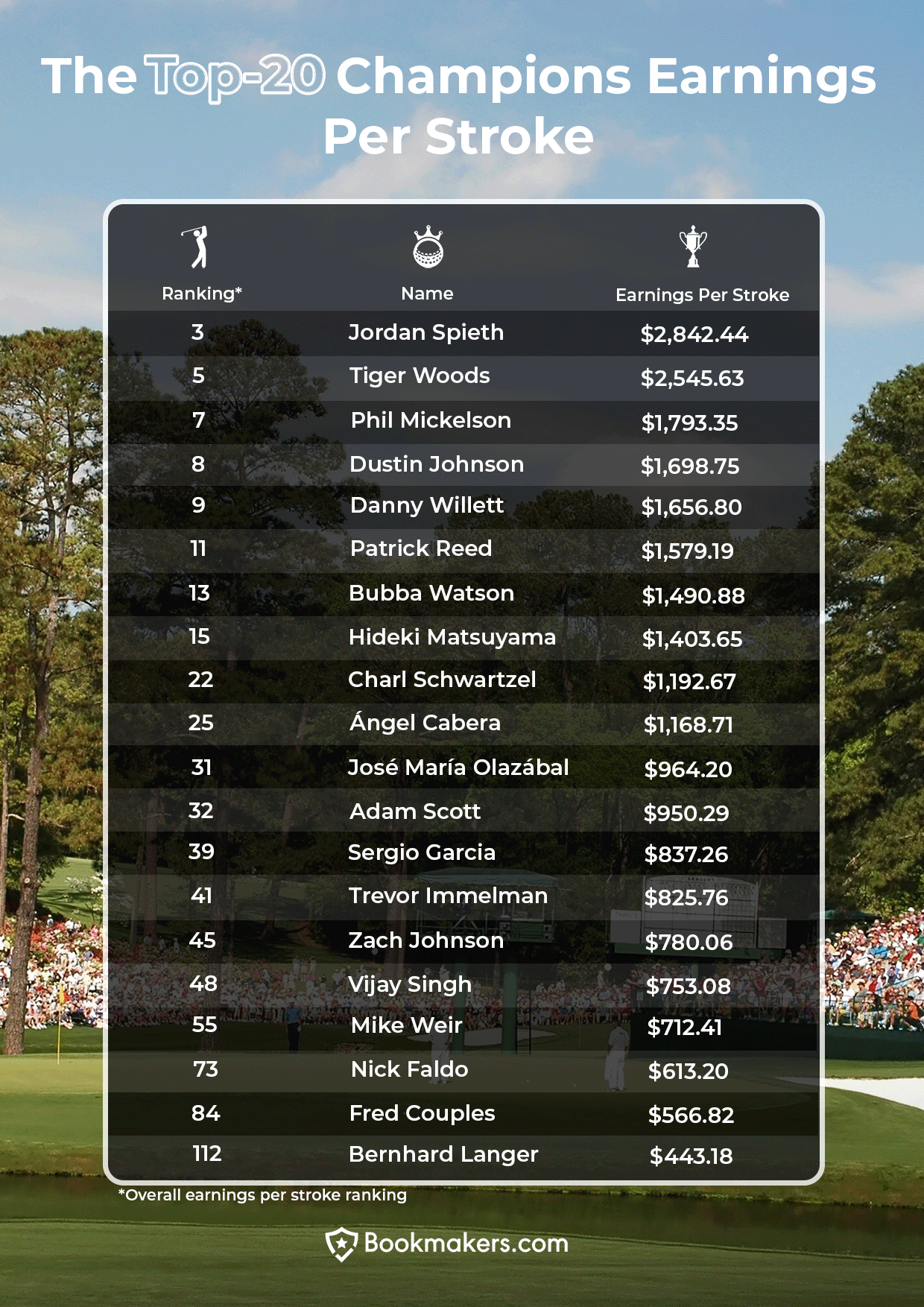 Which Masters Victories Have Been the Biggest Earners?

When comparing the earnings of players per Masters stroke in the year they won the tournament, Spieth takes the title, earning an incredible $8,499 for every shot he took in 2015. However, it’s close at the top, with Garcia’s 2017 win worth $8,441 per stroke. 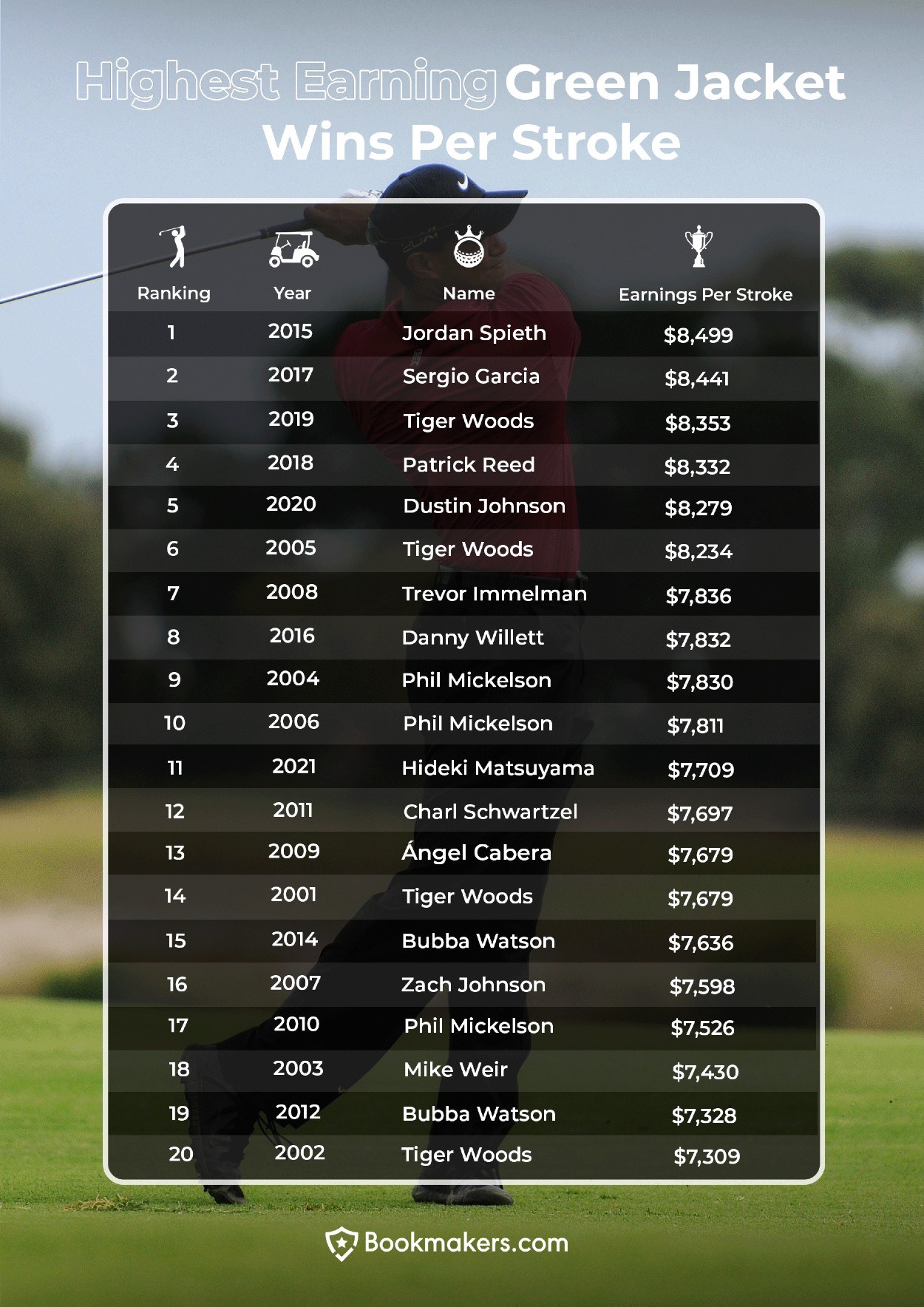 With the Masters just around the corner, it’ll be interesting to see if a new name is soon added to the list! For even more from our team of experts, check out the latest golf betting offers.

To determine the biggest earners per shot at the Masters, we analyzed historical data from ESPN and Augusta.

Masters earnings for each competitor since 1934 were totaled and each golfer’s overall sum was divided by their total stroke count. This revealed their earnings per shot. Each golfer was then ranked.

We then filtered golfers out for each of the subsequent three factor-specific categories, depending on whether they fit the criteria.

To ensure accurate comparison between players, we accounted for the average inflation rate of 3.53% since the first Masters tournament, and adjusted earnings accordingly.