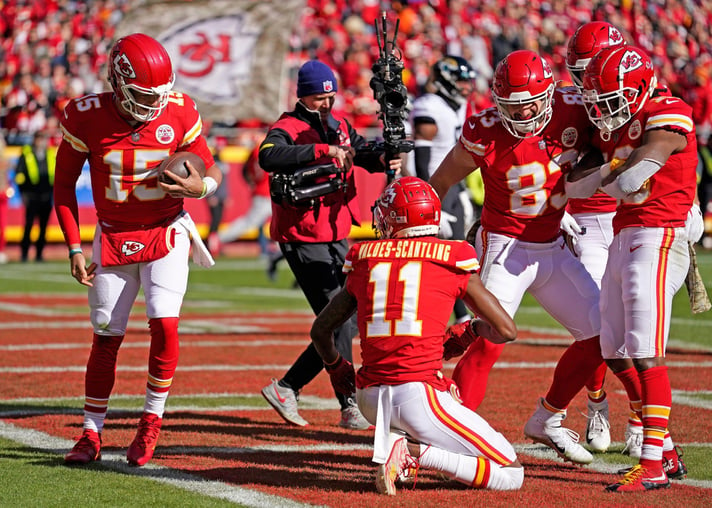 And then there were four. After the AFC Wild Card Weekend matchups were finished Sunday night, the divisional-round playoff picture came into sharp focus. The No. 1 seed Kansas City Chiefs, fresh from their first-round bye, will host the lowest seed left in the playoffs, the Jacksonville Jaguars.

After their Week 17 matchup was cancelled following Damar Hamlin's cardiac arrest on the field, the Buffalo Bills and Cincinnati Bengals are set for an emotional return matchup in Buffalo on Sunday afternoon. The winners of these games will go on to the AFC Championship Game for the right to reach the Super Bowl.

Now we know the matchups, Bookmakers.com will try to guide you through each of the games to help you make the correct NFL picks when visiting the best NFL betting sites.

2021 number one overall pick Trevor Lawrence made his postseason debut Saturday night, and it could have started any worse. He threw four first-half interceptions to help put the Jacksonville Jaguars in the deepest of holes. However, from 27-0 down, he led the team to a 31-30 win over the Los Angeles Chargers. Their reward is a visit to Arrowhead Stadium to play a Kansas City Chiefs team looking to make it two Super Bowl wins in four seasons.

Lawrence is likely not to get the same chance to redeem himself from such a poor start against presumptive league MVP, Patrick Mahomes. The 2018 MVP led the league in touchdown passes (41), passing yards (5,250), yards gained per game (308.8) and QBR (77.6), and he comes into Saturday evening having had his feet up on the couch in Wild Card Weekend.

The current 8.5-point margin the Chiefs are being handed by some NFL betting apps will be the result of a number of factors: Lawrence and the Jags' slow start Saturday night, combined with Mahomes' brilliant season, Kansas' five-game winning streak and the 10-point margin of victory in favor of the Chiefs when these two teams met in November. In that November matchup, the Chiefs had amassed a 20-7 lead by halftime and coasted the rest of the way. If they get off to a similarly hot start, the 8.5 points may not be enough.

There will be no prizes for guessing which of the divisional-round matchups will be the most emotional this week. Damar Hamlin suffered a cardiac arrest following a run of the mill tackle on Tee Higgins in the early stages of their Week 17 matchup, which was postponed and ultimately cancelled. Hamlin has now been cleared to return home to continue his recovery, fewer than two weeks after the incident. With Hamlin there in spirit in the last two weeks, the Buffalo Bills have seen off divisional rivals, the New England Patriots and Miami Dolphins. But there may be concern about how close the Dolphins ran Buffalo with a third-string quarterback in tow, in Skylar Thompson.

The Bills are riding an eight-game winning streak, and they face a Cincinnati Bengals team that are winners of nine straight themselves. As with the Bills in Wild Card Weekend, the Bengals might be slightly concerned that the Baltimore Ravens - losers of four of their last five to close the season - were able to keep the matchup as tight as it was.

Both teams have extremely explosive offenses and could combine for plenty of points. The early over/under line of 50.5 with some USA sports betting sites looks like one that can be exploited.