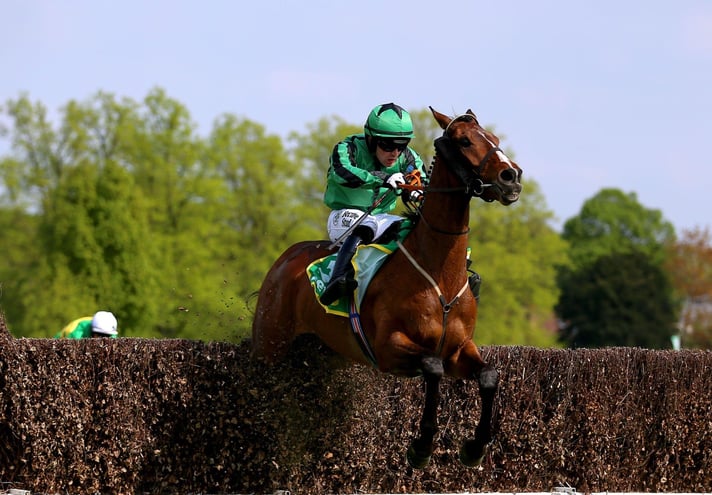 In just over 24 hours, John Joseph “Shark” Hanlon’s stable superstar, Hewick, will compete in the American Grand National in Far Hills, Indiana, having travelled over from the trainer’s base in County Carlow in the Irish Midlands. This trip is just the latest remarkable chapter in the story of this special racehorse, who has continued to defy the odds at every turn of his life thus far.

In this age of £500,000 point-to-pointers, Hewick was purchased for the modest sum of €800 just a few years ago and has since gone on to earn over £270,000 in prize money, with the chance to grow that exponentially with a favorable result in tomorrow’s $250,000 showcase in the US.

Hewick’s remarkable run of success began in October 2021, in the unassuming surroundings of Sedgefield in the north of England, where he won the Durham National off a rating of 142. Since then, he has added a bet365 Gold Cup in Sandown and a historic Galway Plate victory to his CV, and he would have added a Kerry National only for a heartbreaking fall at the final fence just a few short weeks ago. These three successes alone have seen backers at horse racing betting sites get plenty richer, while he has earned a staggering €260,000 in prize money - 325 times the amount of his purchasing price!

Shark sat down with Tom Lee to fill him in on the Hewick story exclusively for Bookmakers.com TV and gave him some insight into how his superstar has travelled over to Indiana, his expectations for the race Saturday and some future plans for Hewick depending on his performance in the national.

The American Grand National has been run in Far Hills since the 19th century, and it has always had strong Irish and UK connections. Nicky Henderson won the 2019 renewal of the race with Brain Power, ridden by stable jockey Nico de Boinville, the year after Gordon Elliot sent Jury Duty over to win the race. Ruby Walsh, Robbie Power and Richard Condon have all won the race in recent years, and should Hewick prove successful tomorrow, it’s likely to become an even more frequent target for connections in the British Isles.

Hewick is the 4/6 favorite for tomorrow’s race, which takes place at 16:05 ET, with coverage available on Sky Sports Racing from 13:05 ET. Betting is available in the UK and Ireland with the best horse racing betting apps. He is not the only familiar face in tomorrow’s lineup, as Henderson is sending over Pistol Whipped, who will be ridden by De Boinville, to try to earn a second victory in the race. Danny Mullins, Jamie Bargary and Thomas Garner, based in Ireland and the UK, have also managed to pick up rides in the race, and they will be in action in Indiana tomorrow.

Darren Hughes
2 Articles
Having worked in the betting industry for close to a decade at BoyleSports, Paddy Power, and Betfair, Darren knows his way around a sports betting site. Horse racing is his main sporting passion, but he has tons of experience in all things sports betting.
Read Articles