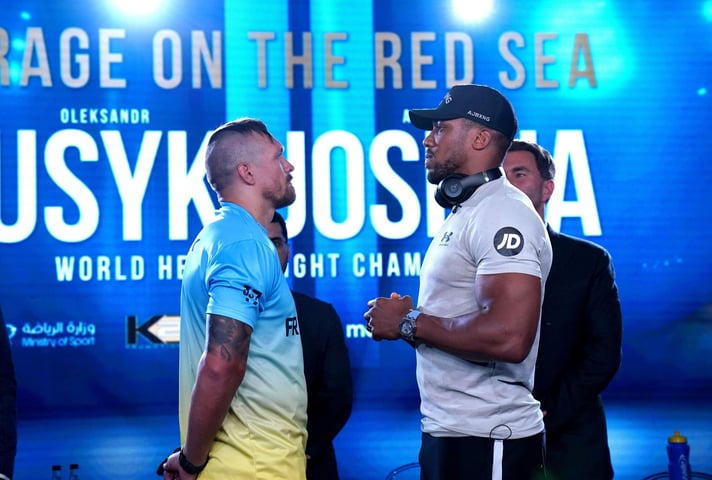 Saturday’s heavyweight rematch between Anthony Joshua and Oleksandr Usyk will be front and centre of all the major sports betting sites. It is a bout awash with possibilities and drenched in the oily wealth of its hosts, will anoint Tyson Fury’s successor following the Gyspy King’s insistence he has now retired. Other shiny and glib garlands will be draped about the victor, of course, but in the old money of boxing, either Joshua or Usyk will become, the man.

Their fight is a lucrative one. Heavyweights, mediocre to magnificent, always draw more eyes, more bucks and more bums on seats than their smaller contemporaries. Exceptions occur but the dictum “when the heavyweight division is healthy, boxing is too,” remains as true today as it did for the eras of Louis, Ali and Tyson.

Will Ring Inactivity Help or Hinder?

The crown Joshua and Usyk chase weighs heavier for some than others. Predicting the outcome of boxing matches is a cocktail of psychological intangibles and the quantifiable physical elements, the science of tactics and an entirely instinctive assessment of a fighter’s motivation and willingness to endure. As Mike Tyson suggested, “Everybody has a plan until they get punched in the mouth.”  It’s what makes people visit sports betting sites in their droves in the leadup to the biggest fights.

Almost a year has passed since Joshua and Usyk first met. The passage of time between the fights is not unusual in modern boxing, but it throws a veil over the stark evidence available for bettors in Usyk’s comprehensive points victory.

On Saturday, boxing fans will learn whether Joshua has been able to adapt, improve and, notably, recuperate from the humbling defeat during that time, or whether the inactivity will exaggerate his ebbing confidence and dwindling youth on which his best performances were built. Of the information available, there remains much to trouble people thinking of backing Joshua to succeed in the rematch at sports betting apps.

Anthony Joshua’s performance last September drew widespread criticism for the tactics he deployed. It was a strategy that appeared to hinge on the misguided belief Joshua could outbox Usyk from mid to long range, and the failure of the fighter - and more specifically Robert McCracken in his corner - to recognize this wasn’t working and adapt accordingly. Usyk was able to double down on his advantages of hand speed, mobility and his greater ring craft, and the Ukrainian ended the fight on the cusp of knocking the English giant out. It was humbling stuff for Joshua, the man who trades on ‘staying humble’.

Neither man has fought since. Therefore, there is no new evidence to substantiate Joshua’s inevitable claims of a mindset shift and the adoption of a different fighting persona. The idea of reconstructing a 32-year-old former champion’s psyche and restyle in a single, if lengthy, fight camp comes across as ludicrous by definition. No training montage, however artistically set, trumps common sense. This is not Rocky III.

Can Joshua Use His Size to His Advantage?

Joshua’s advantages in a fight with a former Cruiserweight champion are his size, strength and power. The isn’t revelatory. Nor should the simplicity of the conclusion deter the 2012 Olympic Gold medallist from trying to utilise them. His problem is imposing those advantages on a nimble, decisive and technically superior opponent. One with sufficient power to earn the bigger man’s respect and an apparent certainty in his own ability that Joshua has lost along the way.

It is the nature of the heavyweight business that Joshua, a box office phenomenon for several years now, has been required to embrace the media scrum that follows in his wake. To satisfy their appetite for quotes, Joshua began to indulge them with motivational soundbites. Within these enigmatic bumper-stickers, truths were available. Windows into a man seeking to progress and evolve but one losing sight of the aggressive puncher that accelerated his ascent and gave him his most significant victories.

He would not have beaten Wladimir Klitschko standing behind a jab. A fight peppered with knockdowns that Joshua loved in the immediate afterglow of the triumph but grew to see as career shortening and to be avoided as subsequent fights came and went.

He was sloppy in creditable wins over the modest Carlos Takam and an ageing Alexander Povetkin, and his problems with Andy Ruiz illuminated his emerging weaknesses and added to them too. Even in winning their rematch, he looked tentative and cautious. Plaudits and media sycophants congratulated him on being studious and precise. That a plainly unprepared Ruiz could still startle Joshua, survive 12 rounds and draw panic from the Englishman when he attacked didn’t bode well for Joshua’s longevity.

And so, it came to pass. Usyk took those hints and tells, the ones exposed by lesser men, and drove right through the technical and mental frailties Joshua demonstrated. The scorecards read 117-112, 116-112 and an all-too kind 115-113, but the dominance of Usyk was clear.

Immediate rematches in boxing tend to follow the pattern of the first and often more dramatically. It is within this narrative that admiration for Joshua’s willingness to battle Usyk in an immediate rematch, without compiling a restorative win or two, begins to grow. Courage perhaps? Or madness? The two are siblings in boxing.

He was more likely motivated by the realisation that beating Usyk in a rematch for almost all the baubles was his shortest road back to redemption and the only path toward Fury, tied to a Wilder trilogy at the time, with the parity in purse his box-office success would otherwise insist upon.

There are some crumbs of comfort in heavyweight redemption stories to encourage Joshua supporters. Notably, Joshua’s own reverse against Andy Ruiz Jnr., while Lennox Lewis victories against both Oliver McCall and Hasim Rahman are memorable examples. More historic battles - Liston v Patterson and Ali, Tunney and Dempsey, Tyson and Holyfield - delivered similar outcomes to their opening battle.

Had Joshua lost by unexpected knockout, made a singular mistake that Usyk had capitalized on, there would be greater faith in a reversal of fortunes in the way Lennox Lewis achieved. But Joshua’s defeat was not the result of a freak punch or calamitous error. Unlike his illustrious predecessor, Joshua was systematically broken down by a superior fighter. He was rendered inert by Usyk’s feints, precision and variety.

When making your choice for the fight, you will want to try find the best betting offers available at sports betting sites. These can come in the form of free bets, deposit match bonus offers or odds boosts. 888sport has an enhanced offer for the fight, with Usyk to win available at 6/1 and Joshua to win at 5/1.

How Will the Fight be Won?

It would be easy to believe that Joshua’s route to victory has to come from all-out attack, and there are strands of logic present in the idea given his advantages of size, but such strategy will offer greater gaps for Usyk’s counters, and once Joshua is tagged, it is hard to be certain he will sustain the pressure. He has become increasingly risk averse. In becoming risk averse, he has, paradoxically, heightened his own vulnerabilities and diminished a once fearsome offense.

For those who believe he can impose himself, that the tutelage and direction of Robert Garcia and Angel Fernandez will summon again the combination puncher he was in his twenties, BetVictor offers individual round betting for 5-8 at 33/1.

During these middle rounds is where the knockout odds grow narrowest between the two. Joshua is dangerous while he has the energy to attack and his confidence isn’t subverted by failure.

As this writer’s tone suggests, I like Usyk to repeat his success from the first fight but minor coverage in 5th and 6th rounds could offer contingency against a Joshua breakthrough for those investing heavily on a Usyk as an outright winner.

Backing Usyk to repeat his success remains the wiser investment given the variables in play. There is doubt; he is still the shorter, lighter man in the ring, shares a year of inactivity and is himself now in his mid-thirties. He is accustomed to being the away fighter – the neutrality of Saudi Arabia will not be a factor – and he will have crystalized his theories about Joshua’s weaknesses in their first encounter. He may be emboldened further and pursue a knockout himself.

Joshua’s lack of head movement, his failure to throw punches in combination for fear of the counters they will be interspliced with, his lack of bell-to-bell engine and his lack of adaptability were all exploited last time. Usyk is wise enough to know such broad holes cannot be plugged in a few months with a new trainer. Boxing to the standard Usyk now operates at is a lifetime’s work.

Paddy Power offers11/2 on Rounds 10-12 for either fighter, which should interest those visiting the best betting sites. I can see Usyk forcing the issue to add an exclamation mark to his work whilst covering the Joshua Hail Mary shot. William Hill offers 33/1 for the 11th and 40/1 for the 12th for Usyk. Or potentially sacrifice the Joshua angle and take the 19/2 available on Usyk in the 10-12 rounds with a potential Unibet sign up offer.

How to Watch Joshua vs. Usyk 2

Broadcasters across the globe will be showing coverage ad nauseum in the days leading up to the fight, while some of the best betting apps may also show live streaming coverage before the fight, though it is unlikely that USA sports betting will have live streaming options for the fight itself. Always check your chosen betting site to see if streaming is available with it.

Those watching from the comfort of their own homes can catch the action on Sky Sports Box Office in the UK, while streaming service DAZN will also be providing the fight live to over 180 jurisdictions around the globe. Ring walks would be expected to take place around 17:30 ET on Saturday, August 20.