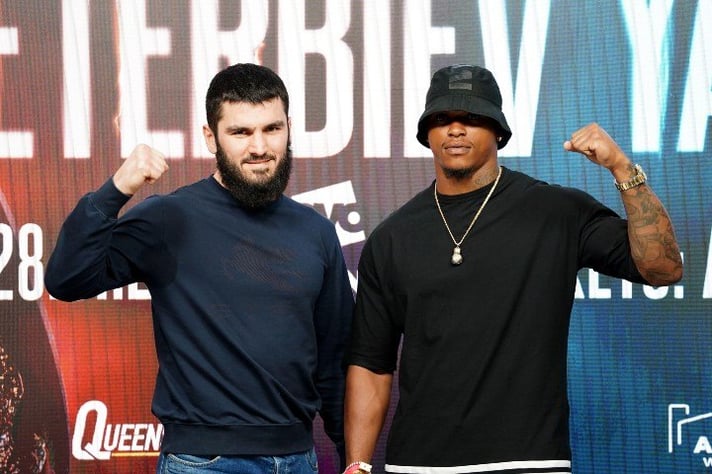 Artur Beterbiev is a name not known to all sports fans. Those who dip in and out of boxing, as the pay-per-views come and go, may not appreciate his value or be aware of his brilliance. For regulars who live and breathe in the mad, mad world of boxing, the Russian-born Canadian national, is renowned for his thudding punching power and the measured brutality of his 18 victories, all achieved inside the distance. The competitiveness of his fight with Anthony Yarde hinges on an assessment of whether Beterbiev, who turned 38 last week, remains within that punishing prime, or has age and modest activity eroded his fearsome tools?

There are large rewards for Yarde if he can do it, and lengthy odds at many of the leading betting sites for those who indulge the apparent fantasy.

The two fighters arrive at this weekend’s bout at Wembley Arena, which is broadcast by BT Sports, with diametrically differing levels of experience and pedigree. Beterbiev is the composed, wily, wrecking machine with a lifetime of boxing acumen to call upon, while Yarde is the power puncher with precious little experience as a professional or as an amateur. Beterbiev is a prohibitive favourite with USA sports betting sites, 1/7 to win for the 19th time, and defend the WBC, IBF and WBO world titles he’s accumulated over the past 10 years as a professional in the process.

Yarde’s promoter, Frank Warren, is an astute judge of matchmaking. Picking the right time to pitch an emerging talent with a champion, former or current, is an art of which Warren has long been a master. The judgement is usually based on the belief the champion has lost something, perhaps unnoticed by observers with a less keen eye than Warren, who has been treading these pathways since before both fighters were born. It may be speed, stamina or resistance, or occasionally a little of all that he notices.

This instinct, this sense of timing is often summarized as, “getting him (the Champion) at the right time.” Ricky Hatton’s victory over the then ageing IBF Champion Kostya Tszyu in 2005 is a conspicuous example. Hatton was close to disillusioned as a contender, as Warren waited patiently for precisely the right champion, in the most advantageous venue, with every advantage at his fighter’s shoulder. It is the craft of a manager and promoter. The rest is history, Hatton got his star opponent, home advantage and a career-defining performance won him the world title.

There are echoes in Yarde’s challenge to Beterbiev, but they are faint. Unless, once again, Warren has seen something many have missed. It requires a lot of faith and a willingness to overlook far more tangible evidence to the contrary and to back Yarde in the belief that Beterbiev is ripe for the taking. Hatton had to walk through hell to beat Tyszu, a proud champion.

The 31-year-old Yarde is not Hatton. Yarde has neither the depth of professional experience, the amateur grounding, nor is he surrounded by the type of ‘brains trust’ Hatton had. Yarde is loyal to trainer Tunde Ajaye, an unconventional and divisive figure, an outlier and one many observers believe Yarde would be better served being distanced from.

There will be much humble pie to be shared if Ajaye guides Yarde to an historic win on Saturday night. For the uninitiated, the trainer can appear a small cog in the mechanics of a victory, but the importance of a trusted trainer is entirely central to the outcome of the fight. Calm, constructive corner work is vital, and at its best, integral to a fighter’s success particularly, when that fighter is inexperienced, and will almost certainly have to endure difficult moments to prevail.

Can Yarde Floor Beterbiev For A Third Time?

Yarde has boxed just 90 rounds as a professional, and had just a dozen amatuer contests before turning over to the paid ranks. The fact he is again boxing the premier fighter in the division, having fought a weary Sergei Kovalev in 2019, following a string of wins against over-matched circuit fighters, and a win and a loss with British compatriot Lyndon Arthur, is bold stuff.

It is a slim body of work he leans on, and he hasn’t been developed through progressive fights to add the experience he will need to survive the relentless meat grinder Beterbiev puts opponents through. He will rely on his relative youth, speed and considerable punch power to try and upset the odds. The upset is priced at around 6/1 for Yarde to win with many betting apps.

Part of Warren’s assessment of Beterbiev may be encouraged by Callum Johnson’s fleeting success against the former amateur World Championship Gold medallist back in 2018. The then unbeaten Johnson dropped the champion heavily in the second round, before being bludgeoned to defeat inside four rounds. It was the second time Beterbiev had hit the canvas having been dropped by another previously unbeaten contender, Jeff Page Jr, earlier in his career.

So, there is scope to believe Yarde can hurt Beterbiev, but it is notable that both Page and Johnson were swiftly put in their place. It is a paradox that Beterbiev has boxed just 83 professional rounds himself. Almost all have been against fighters who would beat everyone on Yarde’s record, Sergey Kovalev notwithstanding.

Time For Yarde To Show His Potential

The confidence in Yarde is largely derived from the eighth round of his fight with Kovalev in 2019, when even less qualified for the challenge than he is for Saturday’s encounter. Before the eighth round, with five rounds still to go, a distance Yarde had never travelled, his trainer demanded he go out in the next round and: 'empty the tank', boxing parlance for going ‘all-in’.

It was a huge gamble and not one demanded by the circumstances of the fight. His youth and power almost made the instruction appear a stroke of genius, as the ageing Kovalev was battered around for most of the ensuing three minutes. At separate points Yarde appeared just one clean punch from an improbable victory.

Kovalev survived the crisis. Yarde had, as instructed, emptied the tank. Three rounds later Kovalev dropped the exhausted challenger with a ram-rod jab, and Yarde was on his back and couldn’t beat the count. It is within that eighth round that this new challenge was forged. A disappointing defeat to an injured Lyndon Arthur, Arthur was unable to throw his right hand, could’ve been presumed to derail the narrative, but a rematch win, by knockout, reignited the idea Yarde could be a force at world-level. There is scant evidence beyond those three minutes with Kovalev, which shouted potential, but ignored the reality of what came next, to support the idea Yarde can with this.

That defeat to British Champion Lyndon Arthur highlighted Yarde’s technical and tactical deficiencies, and spoke to the doubts widely held about his corner. Yarde failed to act on Arthur’s impairment which was evident to everyone on the night. Arthur is a good fighter, well-schooled in boxing’s fundamentals and hardened in a tough gym, but fighters seeking to outwork and outhit Beterbiev don’t get summarily outboxed by a fighter with only a jab to call on.

Where Should the Smart Money Go?

The value for bettors visiting the best betting apps is difficult to find, it requires precision on an knockout outcome, and such is the certainty bookmakers hold on a Beterbiev stoppage win, individual round odds are modest. Beterbiev does make breakthroughs early in fights. Last time out, he dropped rugged American Joe Smith Jr in the opening round before stopping him in the second, taking Smith’s WBO belt in the process.

However, Beterbiev tends to breakdown fighters methodically. He is targeted with his combinations, has good footwork and good timing. Yarde is unlikely to meet fire with fire despite his own power. He may surprise, his trainer tends toward the unconventional. They may believe surprise and speed are their best strategy. It would be a fool’s errand because Beterbiev is far too seasoned to be spooked, and has faced fighters as cute and strong as Oleksander Usyk as an amateur.

More likely is that Yarde tries to learn the lessons of the Kovalev fight. Works hard to remain competitive, but tries to use his speed in quick combinations and then be out of range. To preserve his own energy, to stay out of trouble and to grow into the fight. To try and acclimatize to the power and the Beterbiev rhythm, keep him from setting up his attacks too early with fast punches. The aim being to still be intact late when the 38-year-old begins to slow. It is a hope, a wish, a theory that he will.

It also doesn’t suit Yarde’s stalking style, the hooks that carry the power or his lack of quality footwork. I think Yarde will find Beterbiev makes the ring feel small. The Russian-born Canadian could prove inescapable, and Yarde will be forced to trade. The champion’s superior technique, assuredness and footwork will overwhelm the Englishman. His youth, fitness and courage may keep Yarde in the fight until the middle rounds and his punch power will offer him hope, but there isn’t a path to a win.

Expect Beterbiev to extinguish that pale flame of hope between rounds six and eight which is available at around 17/2, 11/1 and 12/1 individually with betting sites like Paddy Power, Coral and Betfair.