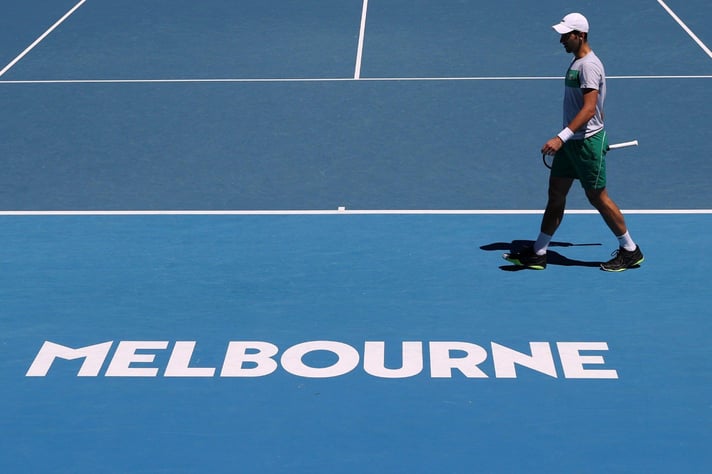 The Australian Open is the first Grand Slam tennis tournament of the season. This competition takes place in Melbourne, with the world’s best players heading Down Under to battle it out on the hard courts. It’s always the subject of big wagering interest on tennis betting sites due to it being the first significant event on the tennis calendar.

There’s often an element of unpredictability when it comes to the Aussie Open due to players having just started the season, while the warm conditions can also be a factor. The men's and ladies tournaments are both a straight knockout format and there’s the opportunity to bet on the winner as well as the individual matches.

The men’s singles matches are best-of-five sets and the women’s singles are best-of-three. Many customers enjoy the chance to place in-play bets on the action ,and there are several betting sites who will also provide live streaming when it comes to this tennis tournament. That means logging into your account and watching your chosen match.

Novak Djokovic won his first Australian Open men’s singles tournament in 2008, and the Serbian has gone on to win a further eight titles. He was actually denied the opportunity to compete in 2022 but previously won over three consecutive years and will be bidding to hit a double-figure tally of successes in 2023.

Djokovic is the most successful men’s singles player of any era at the Aussie Open, with Roger Federer having won six times. Andre Agassi also enjoyed this tournament to the extent that he won on four occasions. In the ladies singles, Serena Williams has been victorious seven times, and that makes her the most successful woman in the tournament's history.

However, there have been a succession of different winners of the ladies singles in recent years, with Ashleigh Barty winning on home soil in 2022, although her success was preceded by Naomi Osaka winning a second title after there had been a surprise winner in 2020 in the form of American Sofia Kenin.

With Serena Williams having recently retired from ladies professional tennis, it means that every Grand Slam tournament has a wide open look about it. While Polish player Iga Swiatek was being installed as market leader across the board for the 2022 majors, visitors of sports betting apps should expect the unexpected in the women’s game..

Li Na, Angelique Kerber and Caroline Wozniacki are some of the players to have emerged through the draw at big odds to win the Australian Open, and the same applies to Kenin, who was not regarded as a serious contender. Therefore, the women’s winner is statistically more likely to land at a bigger price.

As for the men’s singles, Novak Djokovic, Rafael Nadal and Daniil Medvedev have between them taken seven of the eight finalist slots in the past four years, with a smaller pool of male players traditionally competing at the business end of the tournament. However, there are now signs that bigger-priced players could feature in the final.

How to Back Winners on the Australian Open Outright Market

The best tennis betting sites will allow bettors to back a player win-only or each-way in the tournament outright market. The latter is a good option if you want to back a competitor at a big price and still get some kind of reward if they manage to navigate their way through to the final before losing.

There is the option to place outright bets before the tournament starts and also once it has begun. The Australian Open takes place over a fortnight, and the outright markets are regularly updated after each round of matches has taken place. It might be that you can find some value along the way.