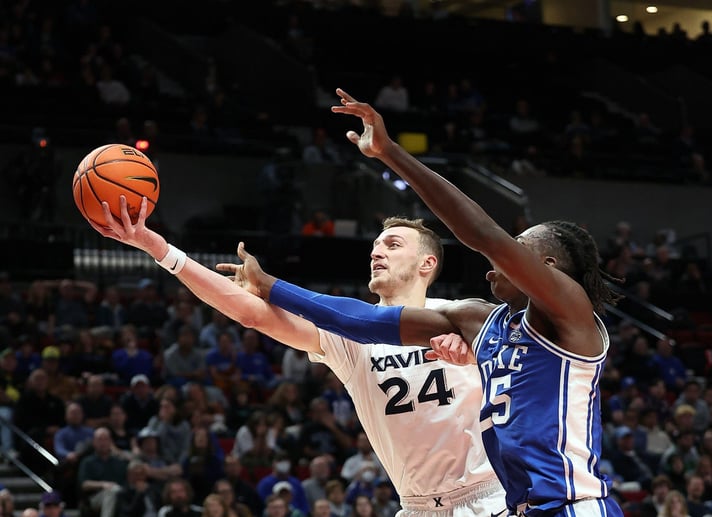 Week 9 of the men’s college basketball season saw a big surprise at the very top. This is just the sort of twist the new year was calling out for as the season heads closer to March Madness.

Readers who spend time on college basketball betting sites were, no doubt, looking for some twists higher up the table - and it appears those wishes have been granted. As always, there were some big changes in rankings for teams between 13-25. Let’s take a brief look at the biggest risers and fallers from Week 9.

UConn’s 83-73 loss to Xavier wasn’t just the biggest shock of the week but one of the biggest shocks of the whole season. The then-22-ranked Musketeers would have been huge underdogs when people were making their college basketball picks. Along with Purdue, UConn were sitting pretty at the top of the rankings for most of the season with an unbeaten record, but it all ended just before the new year.

Adama Sanogo, who has been an absolute star this season with 17.8 points per game and a 60.7% field-goal percentage, was kept quiet by Xavier. He remains one of the stars of the NCAA and is a great college basketball player props pick for most games, but it’s now evident that UConn aren’t the same team if his influence is limited. UConn now sit in fourth place on the rankings.

Arkansas fell four places to 13th after suffering a 60-57 loss to LSU. This was a tight game, as the scoreline suggests, but Arkansas is generally expected to get the better of teams like the unranked LSU. Arkansas was unable to handle an unpredictable LSU side that was led by the heroics of Trae Hannibal, who scored 19 points in just 22 minutes.

Arkansas also struggled with its shooting once LSU switched to a zone defense in the second half. Other teams in the NCAA and readers who enjoy placing bets on USA sports betting sites should keep this in mind when Arkansas takes on zone-heavy teams.

Xavier put in the performance of the week by getting the better of table-topping UConn with an 83-73 victory. The win was well deserved. After a shaky start to the season with losses to Duke, Gonzaga and Indiana, the Musketeers have gone on an eight-game winning run - none more impressive than this one against UConn.

They now find themselves in 18th place in the Top 25. Zach Freemantle is a player to keep an eye on in big games. He has managed 7.8 rebounds per game this season and has a field-goal percentage of 58.9%. This new-look Xavier side is just the sort of team that you should watch out for if you're lurking around the markets on US betting apps.

Every week, there is one team that falls a long way in the AP Top 25, and the Baylor Bears were the unfortunate ones this time around. Baylor succumbed to its third loss of the season against Iowa State, which saw the team drop down to 19th place from 12th last week.

The manner of the loss was also quite concerning – losing 77-62 on the day. Of course, the team has been without important players like Adam Flagler, LJ Cryer, and Keyonte George. This hasn’t helped, but the Bears will have to change something. They can’t be giving the impression that they’re vulnerable without their star guards.

Missouri makes it into nation’s Top 25 again, having climbed six places to 20th after an impressive 89-75 win over Kentucky. Missouri has lost just one game all season, and a lot of credit needs to go to Kobe Brown, who has been on fire in recent weeks.

He managed 30 points and six rebounds in the match against Kentucky, which was ranked 19th at the time. This was one of the finest performances of the season. If he can keep up this form, Missouri can go even higher in the rankings.

A new year promises new stories, and this week certainly provided some. Things will heat up even more in the coming months, with March Madness closer than ever. Purdue are still unbeaten, but if this week has proven anything, it’s that no team comes without flaws so beware of that when making your picks on betting sites.