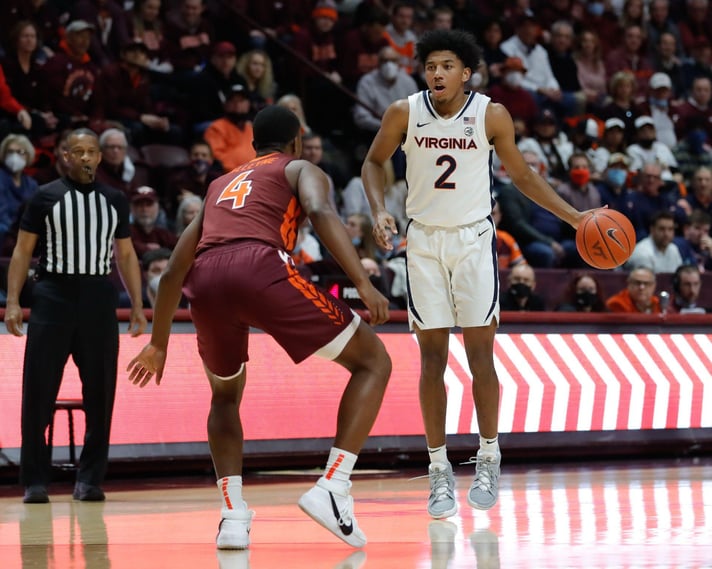 Purdue and UConn are still comfortable at the top with unbeaten records, but every other team looks susceptible to a big rise or fall. Let’s now look at the biggest risers and fallers for Week 8.

It has been a tough couple of weeks for Virginia. They find themselves 13th place in the AP Top 25 after another loss – this time against Miami. In Virginia’s defense, this was a closer game – they lost 66-64 on the night - but it’s still a concerning trend.

They were in second place on these rankings just two weeks ago. They fell to 13th from sixth this time around. There’s still a lot of time to climb the rankings, but they’re certainly undergoing a mini-crisis now. They lost 69-61 to a strong Houston side in the previous week, but they’ll be aware that they’re not the sort of team that can make too many excuses.

They’ve not been shooting well in recent weeks, and this is reflected in the stats of their top performer this season. Kihei Clark has averaged 11.5 points and 5.1 assists per game with just a 38.3 field-goal percentage, which is decent but not enough for a team with Virginia’s ambitions. Clark may be a player to look to other way on when making your college basketball player props.

Duke have been a bit of a disappointment all season, and they suffered their third loss already this week to Wake Forest. Wake Forest won the game 81-70, which should be most concerning because it was never really close with Wake Forest up by nine at the half. They’re now in 17th place in the rankings and should consider themselves lucky to even be in the Top 25, which may be more due to their history than what has been produced this season. This is a team to swerve for the time being when looking at spreads and moneylines on US betting apps.

One player who can’t be held responsible for this drop-off is Kyle Filipowski. He has been contributing in all areas with 14.4 points, 8.9 rebounds and 1.4 steals per game. His teammates need to do a lot better.

Miami Hurricanes have made a strong start to this NCAA season and were finally rewarded with a massive rise from 22nd to 14th place in the Top 25 after beating Virginia 66-64 this week. Isaiah Wong has been absolutely fantastic all season, averaging 17.2 point per game with a field-goal percentage of 46.7%. He has also contributed 4.5 assist per game and 1.8 steals per game. If you're looking for a solid long-term college basketball prop bets pick, make sure Wong is on your list. He hasn’t scored fewer than 22 points in his last four matchups.

His all-round performances have propelled Miami into the top 15 for the first time, and they have only one defeat all year. The big question is whether they can keep going. They’re just the sort of team that readers hoping to win big on USA sports betting sites need to keep an eye on. Miami have now got to prove that this isn’t their ceiling.

After dropping a few places last week following the loss to USC, the Auburn Tigers redeemed themselves with a convincing 84-61 victory over Washington. The win helped them climb three places to 20.

Auburn have been a difficult to predict all season. They started well and looked like a team that was going under the radar before the losses to Memphis and USC. Wendell Green Jr. has been the team’s leading scorer and assist-provider, with 12.6 points and 3.7 assists per game. Readers should wait for more consistency from Auburn Tigers before placing moneyline bets on them at betting sites.

The last team on the list are Mississippi State, who fell six places to 21st after suffering their first loss of the season to Drake. This was a low-scoring game with Drake winning 58-52. Mississippi State has been far too dependent on Tolu Smith all season, and the luck was bound to run out.

He has averaged 15.6 points per game, 8.7 rebounds per game, and has a field-goal percentage of 62.2 %. They overachieved at the start of the season, and the regression seems normal.

With the year coming to an end, don't be surprised if some teams come out looking like entirely different units over the next month or so leading into March Madness.