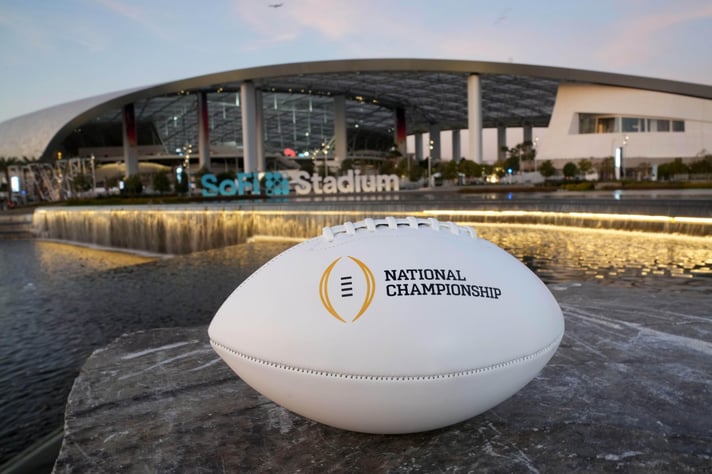 What a couple of games we were treated to in the Fiesta Bowl and Peach Bowl! For the fourth straight season, we had a third seed upset the No. 2 team in the nation, while Ohio State was oh so close to becoming only the third fourth seed in history to shock the supposed best team in college football.

College football betting sites had both Georgia and Michigan as strong favorites to reach the national championship, and plenty of sports bettors will have raked in the money if they went against the spread in both matchups.

With that in mind, what should we expect from the national championship at SoFi Stadium on January 9? Can TCU pull off another shock with USA sports betting sites that have Georgia nearly two-touchdown favorites to win it all for the second consecutive year? Or would it be wise to make your college football picks on the Bulldogs this time around?

One surprising trend in TCU’s favor is the fact that No. 1 seeds have lost four times in the CFP national championship game to just two wins. Last year, it was the third-seeded Georgia that beat No. 1 Alabama 33-18 at Lucas Oil Stadium.

If Georgia was to defend its crown, it would become the only team in the history of the CFP that has managed to achieve it, giving potential TCU bettors yet more hope when looking at the odds on US betting apps.

In the eight iterations of the CFP, there have been five underdog victories to three favorite wins. However, the last three have all been won by the favorite, and this is the first national championship game to see a double-digit spread before kickoff.

What Betting Angles Can You Take?

A lot needs to be taken into account before placing any wagers at betting sites so you can maximize your profits. The first is obviously making sure you know the college football lineups, but the second is what previous championship games and the rest of this season tells you about what might go down.

In the eight previous championship games, there has only been a spread higher than this year’s 62.5 and twice the score has gone over, with the last happening in 2021 when Alabama beat Ohio State 52-24. The spread has gone over six out of eight times. Considering TCU and Michigan combined for 96 points in the Fiesta Bowl and the Peach Bowl saw a combined 83 points, the current 62.5-point line looks really generous.

With that in mind, it would be best to look for college football prop bets concerning the offenses of both teams. Both the Bulldogs and Horned Frogs averaged over 200 yards rushing each game.

Before the CFP, a bet over almost any yardage number for TCU’s leading rusher Kendre Miller would have been the way to go, given his 1,399 yards on the season. However, he injured his knee against Michigan and is questionable for the championship game. His place was taken by Emari Demercado, who turned his 17 carries into 150 yards and a touchdown. An anytime touchdown player prop at +600 with some betting apps on Demercado could provide some great value.

TCU had the fourth-most defensive touchdowns in the nation this year with four pick-sixes. While TCU hasn’t faced the caliber of a team such as Georgia this season, the option of +1400 on a TCU defensive touchdown could be worth your while.

We may have highlighted a couple of TCU-focused college football player props that are available in the lead up to this game, but there are also plenty of Georgia-based wagers you can consider that may have less value attached to them. For those bets, it may be best to look for any betting offers related to the game to take advantage of.

Before the CFP semi-finals, it was almost unthinkable that Ohio State would shock Georgia and make it to the national championship, but were it not for some late heroics, the Buckeyes would be the presumed favorites to take home the hardware.

With that in mind, it is equally hard to see TCU overturning Georgia in this matchup. It is the largest CFP spread in history, but we think taking Georgia at -12.5 or even stretching that to two touchdowns for greater value could be the way to go. Keep in mind that the last four national championship games have seen the winning margins average 22 points, with the smallest margin of victory being Georgia’s 15-point win over Alabama last year.