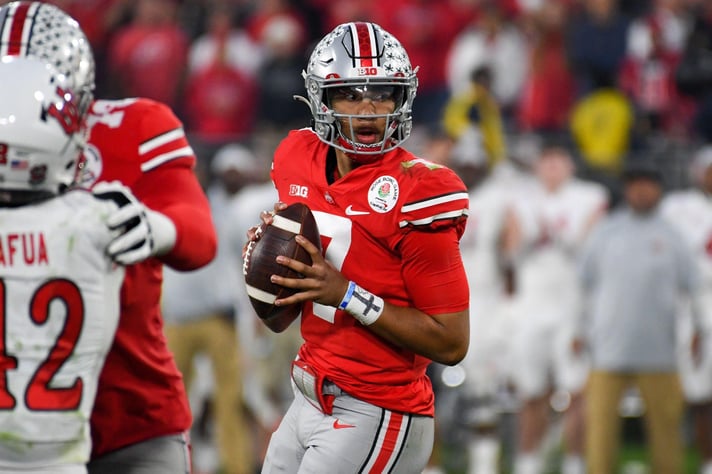 The College Football Playoff is an extravaganza of the very best teams in the country each year, with the four best programs duking it out for the national title - at least until 2024. From 2024, there will be 12 teams in the playoff, but for now we have four teams to focus on.

Since 2014, the CFP committee has chosen the four contestants, with plenty of controversy about smaller schools being overlooked because of their schedule’s perceived lack of strength. This year is only the second time since the Alabama Crimson Tide hasn’t qualified for the playoff, but there are two overwhelming favorites with the best college football betting sites.

Defending champions Georgia and last year’s beaten Orange Bowl team Michigan enter the playoff unbeaten, with the one-loss TCU and Ohio State joining them. Without further ado, let’s preview how the contests could shake out and which teams you might want to favor when making your college football picks.

TCU entered conference championship weekend as a nailed-on participant of the College Football Playoff for the first time in the team’s history. They had a 12-0 record and weren’t far behind Michigan and Georgia in the national championship market with USA sports betting sites.

However, the Horned Frogs were then beaten 31-28 by No. 11 Kansas State in the Big 12 Championship Game. They were eventually still chosen as the No. 3 seed, but they come into the Fiesta Bowl as 7.5-point underdogs at the time of writing.

This game is likely to be won and lost in the trenches, and Jim Harbaugh’s Michigan Wolverines are masters at that game. The Wolverines allow the third-least rushing yards a game at 85.2, while they gain the sixth-most rushing yards a matchup at 243. Those interested in college football prop bets could do worse than looking at the under for TCU’s leading rusher, Kendre Miller.

In total offensive yardage, Michigan ranks in the top 30 in the nation and third overall for defensive yardage allowed. TCU has the 16th-best offense in the country, but the defense isn’t in the top 50. Expect Michigan to run the ball down TCU’s throats from the first whistle to the last and head into their first-ever College Football Playoff Championship Game.

Before the penultimate week of the regular season, Ohio State were a safe pick in the top four of the rankings. Then they went and lost to Michigan by 22 points and things got murkier. It is perhaps more by luck than judgement that Ohio State qualified, with no other team worthy of the fourth spot come decision time.

They enter the Peach Bowl as 6.5-point underdogs with most US betting apps. But the tale of the tape tells us this could be a close affair, even after the dismal showing in what is known as The Game against Michigan.

In terms of raw numbers, Georgia has the ninth-best defense in the country to Ohio State’s 11th, while Georgia ranks seventh nationally on offense to Ohio State’s sixth. The key question coming into this game, however, will be how will Ohio State quarterback CJ Stroud - a presumed top-five NFL draft pick this coming offseason - deals with pressure coming from Georgia’s stifling defense?

Stroud had just six interceptions to 37 touchdown throws this season, but two of the picks came against the Wolverines in their 45-23 defeat. Can something also be gleaned from Stroud’s performance against Northwestern in the team’s 21-7 victory? Northwestern has the 12th-best passing defense in the country and Stroud struggled, completing just 10-of-26 passes for 76 yards.

With the margins relatively fine at most betting sites, it might behoove you to look at over/under market, which currently stands at 62. Either way, we expect Georgia to win this comfortably and set up a mouth-watering national championship game with Michigan on January 9.