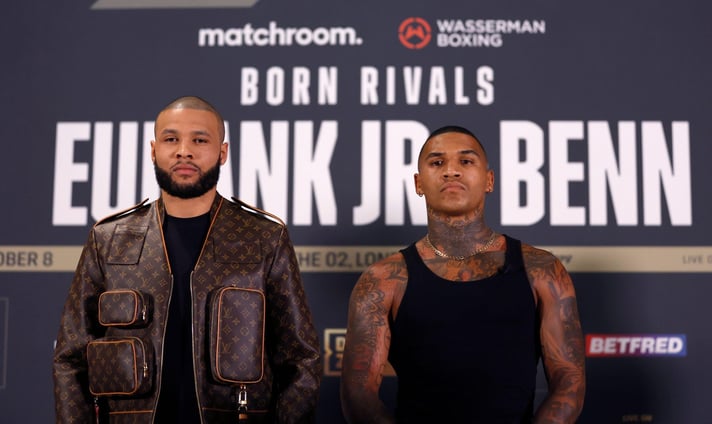 There will be a different type of atmosphere in the O2 Arena, London, this weekend when the British pairing of Chris Eubank Jr. and Conor Benn march toward the lights. Memories will be stirred. Emotions and glasses will be charged.

Fans of their fathers, Chris Sr. and Nigel, two warriors of the 1980s and ‘90s, will recall the febrile nature of their great rivalry and those who watched as children, or were not yet born, and suckled on tall tales of Eubank and Benn fights, will grasp tightly the chance to experience those golden days via the proxy of their fighting sons. Those feelings, of a deeply rooted affinity to a fighter, are harder to muster among the inactivity and sprawling labyrinthian reality of boxing in the 21st century.

Rivals all too rarely fight.

Saturday’s headline contest boasts this once common intensity, inherited though it may be, and is a refreshing fixture even as a catchweight contest.

All you must do is choose your fighter when visiting the best sports betting sites.

Eubank Jr. Has Taken the Same Career Approach as His Dad

The story of Chris Eubank Jr. and Conor Benn's respective careers have similarities beyond the history of their predecessors. Paths separated by weight class and a five-year head start for Eubank, neither enjoyed the benefit of extensive amateur careers and learned much of the craft of a fighter as a professional burdened with a surname of expectation and propelled by the interest simultaneously afforded by the deeds of their fathers.

From the ring garb to the entrance music, every string on the harp of nostalgia was plucked. Eubank, the gifted athlete with the grainy footage of car park altercations, Tina Turner soundtrack and staged poses. Benn, the familiar black shorts, all-or-nothing offense and predator's glare. They had the theatrics, but could either actually fight?

Eubank's story began 11 years ago. It has been a slow burn career with modest peaks, given his billing, and defeats to slippery Billy Joe Saunders and sturdy boxer-puncher George Groves at Middleweight (160lbs) and Super-Middleweight (168lbs), respectively, illustrate his limits thus far.

An opportunity to box Gennady Golovkin was pursued and then, once presented, declined. It was a move that verified the idea Eubank's career was a curated one and that undue risk, given his lack of grounding and despite the noise his name and the voice of his father naturally accrued, wouldn't be undertaken.

Kell Brook took the Golovkin fight and was never the same again. A bullet dodged perhaps or merely awareness of his own limitations. Either way, Eubank has struggled to clamber back to that type of defining opportunity.

He boasts fast hands and has also shown he can take a shot too. In defeat [LPTS 12 in 2018] to George Groves, a heavy-handed world champion on a career-best sequence, couldn't budge him. Despite a clear defeat, Eubank left that fight with more credibility than he began and with a sense he had boxed too conservatively and without sufficient faith in his own stamina, power or technique.

The comfortable decision win over Middleweight veteran Arthur Abraham and the three-round demolition of rugged Turk Avni Yildirim suggested a turning point; the lacklustre performance against Groves, in which he failed to ignite until it was too late, suggested otherwise.

Benn Has Improved From His Early Fights

Benn, meanwhile, turned professional to more fanfare than his ability merited, the luxury of his name ensuring pay and spotlight he was conspicuously unable to justify when the bell rang. Promoter Eddie Hearn was later willing to concede, as Benn's performance dramatically improved in 2020/21, that the beginning of Benn's career was little more than a sideshow. Opportunistic, given the progress Eubank Jr. had made and Benn's lack of amateur credentials.

He was erratic, unpolished and lacked the stamina to deliver on the inferred promise fans came to see. His style was a pastiche of his father's aggressive, all-action approach but lacked the nuanced detail of the elder's success. Head movement, low chin, natural power, good hand speed and an ability to land in combination to complement the eye-catching power shots. And Nigel Benn had a thirst for a fight, "lets 'av it!" as he would often say, that few of his contemporaries could match. It made him a TV star.

What Benn the younger did demonstrate was heart. In December 2017, in a six-round undercard fight with unheralded Frenchman Cedrick Peynaud, Benn was dropped heavily twice in the opening round, and clubbed around the ring. At Welterweight (147lbs), lest we forget. Stamina spent and technical flaws critically exposed, he survived on instinct and will.

He knocked down his opponent late to seize a generously clear decision that revealed much; that his youth and zeal had reached their inevitable ceiling but also that he wasn't a silver-spoon heir to a world he didn't understand. Benn had guts. And the fight taught him, aged just 21, that if he were to tread with meaning in the footsteps of his father he would need to improve dramatically. Something that isn't always possible however desirable the genetics and eager the heart.

By the time Benn fought Sebastian Formella three years later, still under the tutelage of Tony Sims who had worked with Nigel throughout his career, development was evident. Much of the wildness was contained. There was more certainty and method in his work, control and improving footwork. Formella was a competent, European-level, 10-round fighter and proved both plucky and dangerous in an entertaining bout. It was not a 'statement' victory, but progress was clear.

At this point, their careers remained on entirely different trajectories. Eubank was about to trounce tired former world champion James DeGale in a signature win in early 2019 and remain on the cusp of a world title shot as a result at 168 pounds. Benn had proven able to beat a circuit fighter over 10 rounds at 147 pounds.

The weight difference is restated as it is a primary factor in determining where to invest this weekend. There are many truisms that prevail in boxing. One of the oldest among them; 'A good big guy beats a good little guy.'

Is Eubank Jr. Too Big For Benn?

Size isn't everything, but it is a factor. In a catchweight bout - this fight is made at 157lbs, three pounds beneath the Middleweight limit and 10 pounds above the Welterweight limit Benn has boxed at his entire career - it could be decisive. History provides examples to disprove the theory, but they are memorable because they are the outliers. Where ability is equal, size can be a sufficient differential. Where ability and seasoning may lay with the bigger man, too, there is much to like for punters going with tradition at sports betting apps.

Eubank is an unexciting 1/2 with Betfair and other sports betting sites for the outright win. For a fighter with natural height, reach and size advantages, with better fighters on his record than anyone Benn has boxed, albeit with wins and losses, this strikes most as a solid return.

At the time of writing, the market is following that theory and drifting on Benn to succeed. There could be sentiment motivating the early betting on Benn, too. Eubank Jr., much like his father, is a divisive character - deliberately so.

Benn's backers at UK betting sites may be emboldened by history and allowing wishful thinking to permeate. Nigel Benn was always the fan favourite between the two, Eubank Sr., the pantomime villain they couldn't understand. As such, Eubank may be priced more generously here than analysis supports. He should be a stronger favourite with most international betting sites.

For Benn to win this bout, he will need to close distance without being tagged heavily on the way in. Head movement will need to be exceptional; he will need to be controlled but persistent in his aggression and force Eubank to fight at a brisk pace without trading at middle and long range where Eubank's reach and hand speed will spell trouble for the shorter man.

The advantage Benn could have, stamina, may be enhanced by a busy fight. Eubank is traditionally, the Yildrim demolition notwithstanding, a slow starter on the big nights of his career. He poses too much, seems cautious or lethargic, pursuing punch perfection and in doing so fails to throw as his hand speed and athleticism should encourage him to. If Benn can set a good pace, and have some success early, then later, if he remains intact, he may be able to capitalize if the cut in weight has drained Eubank. It wouldn't be without pain to execute.

Eubank has never boxed this low in weight. It will have required sacrifice to scrape away the pounds from his taut and already disciplined physique at the age of 32. Such loss can hollow out a fighter's stamina and weaken them to blows and to the requirements of a distance fight.

For those who feel Benn may have the aggression and fitness to outscore a Eubank pre-occupied with landing one showreel shot, there is 11/2 available with BetVictor on a decision win. For this observer, it doesn't feel generous enough to tempt. A Benn stoppage win is even harder to conjure despite his rampant form among Welterweight gatekeepers.

In the period since Benn's win over Formella, progress has been accelerated and his self-belief has become much more deeply rooted. This fight being made reflects that given the disadvantages Benn is at in any contest with a man who has frequently boxed, at a high level, three weight classes up. Victories over rugged Samuel Vargas (TKO1), veterans Chris Algieri (TKO4) and Chris van Heerden (TKO2), and a persona that ignites belief in any audience has encouraged the notion Benn is a serious contender at Welterweight.

But this fight isn't at Welterweight. Chris Eubank, despite his 32 years, is lightly worn and is bigger, taller and has fought better opponents. His most recent win, on points over Liam Williams, a ferocious, strong and in-form Middleweight, illustrates the challenge awaiting Benn. I think Eubank's durability, speed and obvious size advantages will overwhelm a spirited Benn at some point. Possibly early, but given his slow starts and Benn's improvements, a second half of the fight stoppage, Rounds 6-12, is available at an enhanced offer of 4/1 with Paddy Power and looks an enticing bet.

And I want Conor Benn to win.

How to Watch Eubank Jr. vs. Benn

People watching from home will need to subscribe through the global streaming service DAZN, with those in the UK, Ireland, Australia and New Zealand having to pay for the pay-per-view and the rest of the world having the bout covered on their subscription. Ring walks for the fight on Saturday, October 8 will likely be around 17:00 ET.

David Payne
@TheBoxingWriter
4 Articles
David Payne has been a boxing writer and reporter for two decades. He has featured at TheSweetScience.com and is a regular contributor to LoveSportRadio. You can find his latest news, opinions and insight at BoxingWriter.co.uk.
Read Articles