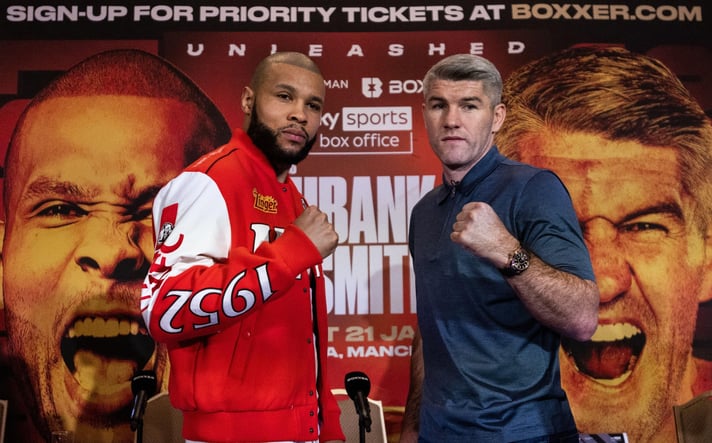 Most of Chris Eubank Jr.’s career has been spent in a quest for authenticity. To prove himself worthy of the name he inherits from a legendary father and to garner respect as a serious contender in the Middleweight division. There have been high points where he has legitimised the hyperbole projected before him, and there have been fallow periods in which his career has stagnated and the whisper of cynicism that haunts those with illustrious predecessors has grown ever louder.

On Saturday night at the Manchester Arena, he faces Liam Smith, a decorated member of the famous Smith boxing family and, superficially at least, the antithesis of everything that Chris Eubank Jr. represents. This contrast isn’t a new narrative. Eubank is always boxing someone hoping to knock him off the pedestal he adopts, and the one he is presumed to sit upon. Boxing thrives on these types of storylines and makes wagering on them at betting sites all the more popular.

It is the white and black Stetsons of the great Western films and helps build rivalries and ticket sales. Of course, the nature of humans, and of fighters, is never so binary. Nuance exists in both Eubank and Smith. But nuance doesn’t sell. Good guys and bad guys do.

Can Eubank Let His Boxing Do The Talking?

Eubank has always boasted of his own world-level credentials despite often tiptoeing around the biggest challenges, notably rejecting the opportunity to fight Gennadiy Golovkin, and yet in Liam Smith, a career Light-Middleweight, that elusive authenticity may finally be available. Liam, like brothers Paul, Callum and Stephen, is tough, well-schooled, as they say in the game, and a fighter singularly unimpressed by reputations, particularly those, in his perception, built on sand.

In the pre-fight Gloves Are Off programming, when the two men sit face-to-face and discuss the forthcoming fight with host, Sky Sports’ Johnny Nelson, Liam Smith alluded to this conclusion, one widely held in the boxing community: “Chris, every time you faced anyone with good fundamentals, you’ve lost.”

Again, it is a conclusion without the benefit of context. The defeats, to Billy Joe Saunders and George Groves, were both on points, and the pair were far more than merely fighters with good fundamentals. Groves a heavy puncher, Saunders an elusive Southpaw and both world-class fighters on the nights Eubank fought them.

Unlike many of those who have tried and failed before, some good fighters among them, ageing versions of James DeGale and Artur Abraham the best among them, Liam Smith is intelligent enough not to underestimate Eubank however dismissive he may be publicly.

Smith will recognise Eubank has quality attributes - speed and athleticism - that the Brighton man is always physically well prepared and that it will take more than merely will and aggression to beat him. Similarly, Eubank is now also wise enough, and surrounded by sufficient wisdom in trainer Roy Jones Jr., former trainer Ronnie Davis and his father to know he too will need to box well to overcome Liam Smith. Despite describing Smith as “A ,B, C, 1, 2, 3 – there are no surprises.”

Can Smith Spring a Shock?

Now, 34 years old, Smith is assuredly in the autumn of a career that began in 2008. This will be his first fight at the official Middleweight limit. Although he has boxed above the 154-pound limit in ‘marking-time’ fights. It is a significant factor. He has always been a solid Light-Middleweight, standing over 5’9”, and the added poundage, as older fighters always insist, will be welcome at this stage of his career. Shedding the final few always grows more difficult as the years pass.

The assumption may be that Eubank’s presumed power advantage will be too much for Smith, and a look at the odds at most USA sports betting sites make Smith the underdog, but a study of his record shows Smith travelled nine rounds with Canelo Alvarez, won two gruelling fights with Welsh hard man Liam Williams and boxed to a points defeat to a then-rampant Jaime Munguia. All three of those now box at Middleweight or beyond and score knockouts in those divisions. In short, Smith has an excellent chin. He will not be discouraged easily nor disorganised by any solitary blow. He’s stout, experienced and Eubank is not the puncher Canelo is. Although a standout knockout of Turkish slugger Avni Yildirim suggested otherwise.

As the 12/5 underdog with most betting apps, and with less road ahead than Eubank, Smith will need to be assertive and dominant to secure rounds. This shouldn’t be an aspect to consider. Impartiality should be innate and unflinching, but Eubank, despite the support Smith may enjoy in the Arena, will be the house fighter. The fighter with the more lucrative future.

However choosy he elects to be in his matchmaking, and, aged 33 himself, he can ill-afford to waste time, Eubank is the fighter who will be able to convert a win on Saturday into a world-title shot if trepidation doesn’t intervene as it did when the Golovkin invitation materialised.

Liam Smith cannot afford to box too cautiously, or to make a slow start. He does not need to be chasing the fight having sacrificed rounds. Eubank is a good athlete who often finishes strongly. Smith will believe he can have success behind the double jab, that he can score to the body and that he can close distance more effectively than those who have fallen to Eubank before. The “fundamentals,” as he refers to them.

Where Should the Smart Money Go?

The two have sparred before. As always, recollections vary. As a ‘boxing man,’ Smith was reluctant to comment too much on those sessions as the adage goes, ‘sparring is sparring.’ However, he did divulge in conversation with Sky Sports that he felt Eubank is vulnerable to body shots: “You can have the greatest chin in the world, but I know he’s weak to the body. I know I hurt him to the body and hurt him well to the body. He fully remembers my spar with him let me tell you.”

For those investors looking for a bigger return, the idea Smith could break down Eubank to the body could appeal. 16/1 is available with a number of the best betting apps, including Paddy Power, Coral and Betfair, on Smith stopping Eubank between the 9-12 rounds. It is a bold strategy, as Eubank has never really been in trouble in his 34-fight career - 32-2 (23) and never been down or stopped. There is scope for Smith success, however. I believe he is a well-rounded fighter and a solid if not concussive puncher, and he will get Eubank’s respect early. It is important Smith does. He needs to discourage Eubank and try to make it a boxing match without allowing Eubank to rest, or box comfortably from distance.

Eubank has fast hands and can punch in eye-catching combinations if allowed to. Smith is 4/1 to win by decision, with Ladbrokes and some UK betting sites, and there is temptation in that pick. Particularly if further protected by the 4/7 available on the fight going the distance. But it will need Smith to be competitive early.

As with all fights, a lot will hinge on how the two compose strategies and whether they stick with them beneath the lights when the pressure is on and the leather is flying. Eubank is naturally the bigger man, and history proposes that a good bigger man will always beat the good smaller man. But, as explained, little is that black and white in boxing.

Having boxed at 168 pounds, Eubank could find it hard to respect Smith’s power. He may find it difficult to resist trying to impose himself, his strength and his presumed to be superior power. His work with Jones, with whom he has worked for a year or so now, appears to have focussed on broadening his style. Making him composed on the outside, utilising his speed and height - 5’11” - to better effect. There is a miserly 9/1 available for a Rounds 1-6 Eubank win at some US betting apps. Smith is far too durable for such narrow odds.

A better strategy for punters is to look at longer outcomes or enhanced offers, such as the one being offered to new customers at Parimatch. The betting site is willing to lay 20/1 on Eubank to win, with the typical wagering requirements involved.

A longer outcome wager respects the will and resolve of both men, and the ability they’ve shown to take a shot. I think Smith offers value at 4/1 for a decision but would need moderate investment given the more lucrative future is with Eubank, which tends to impact scoring. Add some cover by betting on a distance fight at 4/7 and a smaller cover on Eubank to get to a tiring Smith late at 13/1 for rounds 10-12 available with several of the best UK betting sites.

How to Watch Eubank Jr. vs. Smith

Sky Sports Box Office will broadcast the fight via a pay-per-view in the UK from the Manchester Arena, London, on Saturday, January 21.