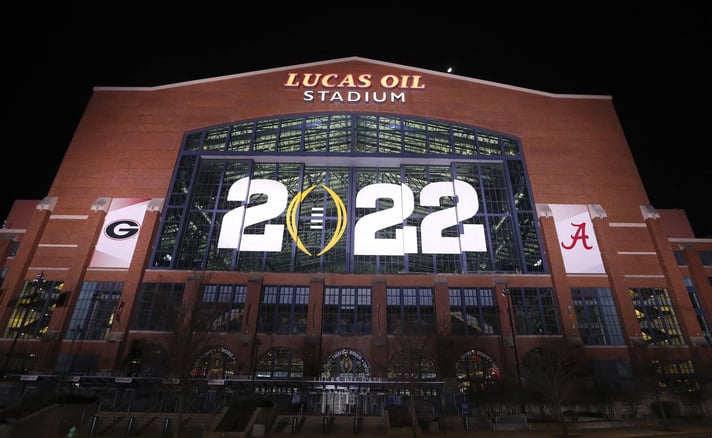 The College Football Playoff is into its ninth year, which is a good enough sample size to make some educated predictions for this year’s semifinals that may help you win a few dollars with college football betting sites.

This year’s semifinals see No. 1 Georgia take on No. 4 Ohio State in the Peach Bowl and No. 2 Michigan face No. 3 TCU in the Fiesta Bowl. Both matches take place on New Year’s Eve, with the national championship on January 9 at 19:30 ET.

With the four best programs in the country facing off, it stands to reason that we should expect some close semifinals. However, history suggests it might be best to not go for a close finish when making your college football picks.

In the 16 CFP semifinals so far, there have only been three matches that have been settled by a touchdown or fewer points. The Sugar Bowl in 2015 saw the fourth-seeded Ohio State Buckeyes topple No. 1 Alabama 42-35. The 2018 Rose Bowl saw Georgia beat Oklahoma 54-48 in double overtime, and the final one-score game came in the 2019 Fiesta Bowl as Clemson outlasted Ohio State 29-23.

So, how will this help us when visiting USA sports betting sites? The current line in the Georgia-Ohio State game is 6.5, while the line is 7.5 in the other semifinal. The average margin of victory in the CFP semifinals is 21 points. Take the over in the points spread at US betting apps.

Should We Expect An Upset?

In the 16 matches that have been played in the CFP semifinals so far, there have been six instances of a lower seed beating a higher seed. One glance at betting sites currently would tell you that both Georgia and Michigan are heavy favorites to move on to the national championship game.

However, recent history is hard to ignore. In each of the last three No. 2 vs No. 3 matchups, the No. 3 seed has won. Even more interestingly, last year’s second seed was Michigan, just as it is this year. In that game, The Wolverines were beaten 34-11 by eventual national champions Georgia.

Ohio State also has history in this regard. The Buckeyes were the first No. 4 seed to win the national championship, doing so by beating Alabama in the Sugar Bowl and then Oregon in the championship game. If these trends interest you, you will be able to find some valuable prices. At the time of writing, Ohio State is +220 to beat Georgia, while TCU can be had at +250 with some betting apps.

Will The SEC Triumph Again?

Georgia is the big favorite heading into the CFP, but it wouldn’t be the first betting favorite to be knocked out in the semifinals. Even if the Bulldogs make it through to the national championship, No. 1 seeds have lost more times than they have won. Indeed, there have been two No. 1 seeds win the CFP to four losing No. 1 seed finalists.

One trend to look out for is whether the SEC will be represented in the final. The only team from that conference this year is Georgia. An SEC team has reached the national championship game in each of the last seven years.

A trend counting against TCU at present is that only one team outside of major conferences the SEC, ACC and Big Ten has ever made an appearance in the CFP championship game. TCU won the Big 12 this year and would have to make history in order to make the title game.