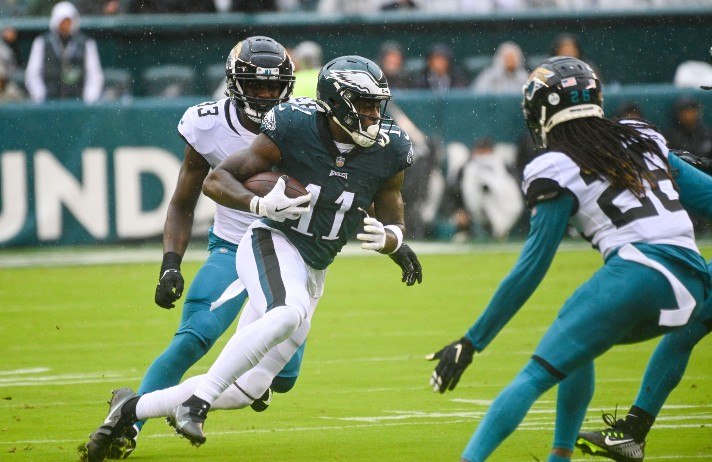 Just four games make up the slate in DFS this weekend, as the NFC Divisional and AFC Divisional games take center stage. A lot fewer players to choose from means there will be a lot of similar lineups, so it’s a case of zigging when everyone else is zagging to an extent. There are some bona-fide DFS stars who you should definitely have in your lineups, though.

So let’s get to it! Check out who we think you should start in your final DFS lineups before the postseason starts at DraftKings and Fanduel below:

Picking a QB against a team that was top 10 against the position in fantasy this year mightn’t seem like a great idea. If we get the Dak Prescott we got last week against the Tampa Bay Buccaneers, though, then he’s the man to have in your lineup.

He had 305 passing yards, four passing touchdowns, with 24 rushing yards and a score on the ground on top of that for 39.6 fantasy points, which was a massive showing. He’s been a sneaky rushing threat, scoring a rushing touchdown in his last four playoff appearances. If the Dallas Cowboys are ahead, it’s likely on the back of Dak’s play. If they’re behind, they’re relying on him even more. Fire him up.

Name a top-20 fantasy running back this season, who was also a top-five running back from Week 10 onwards and top-two from Week 14 onwards. There are two - Christian McCaffrey and Jerick McKinnon.

McKinnon’s on a six-game scoring streak and comes into this game with his team as eight-point favorites. It’s very likely they’ll be running the ball, which means McKinnon will see more touches. This is a Kansas City Chiefs team without many reliable receiving options outside of Travis Kelce, too, so there should be plenty of work through the air for Jet.

You have to go back to Week 14 for the last time AJ Brown recorded fewer than 90 receiving yards. That was against the New York Giants, which isn’t a great sign. But he still managed four catches for 70 yards and a touchdown.

Brown is a big play waiting to happen and is likely to be a high volume play, too. The Giants were middle of the pack against fantasy receivers this season, but everything should be in line for a monster performance from AJ Brown.

Engram had a career game last week, when the Jacksonville Jaguars needed him most, posting a 7-93-1 line on 11 targets as his team played from behind. While they mightn’t find themselves in as big a hole this week, the odds at NFL betting sites suggest they will be playing from behind.

The Chiefs are susceptible to receivers who operate in the middle of the field, and that’s exactly where Engram should be making hay. Numbers as impressive as last week are unlikely, but he should be in line for another decent performance, at a fraction of the cost of Travis Kelce.

The Bills are in the lower half of DSTs this weekend, as far as cost is concerned. On the face of it, that makes a lot of sense, as they host a Cincinnati Bengals team that has a potent offense and could put up a lot of points.

With the Bengals’ offensive line woes this past week, though, the Bills DST looks like a clever play. They should be able to rack up a few sacks on Joe Burrow, and with each sack comes the potential for a turnover or even a safety.