Does Having a Top-5 Draft Pick Guarantee Success? 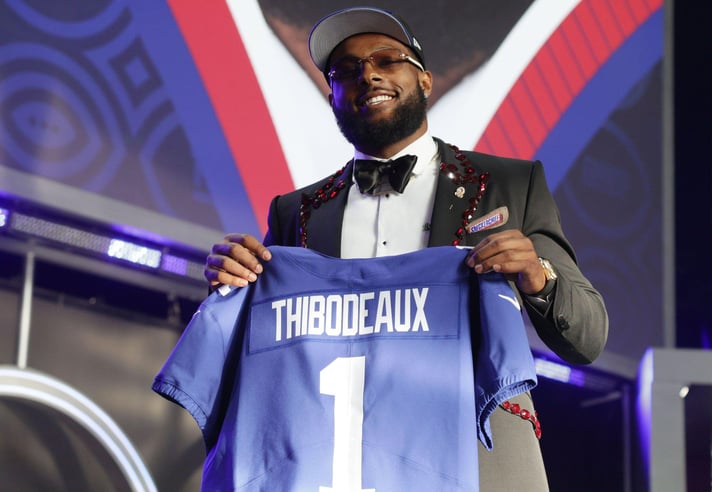 While every fanbase might start the year with optimistic hopes of reaching the playoffs or maybe even of being Super Bowl winners, it is sometimes clear within the first couple of matchups of the regular season who the haves and have nots are in the NFL.

The haves continue to think their team can go all the way on to lift the Vince Lombardi Trophy and maybe even back their assertions at the best NFL betting sites. For the less fortunate have nots, however, there is generally only one thing that can brighten an otherwise gloomy season, and that is the hope that comes with being the worst team in the league.

While that might sound oxymoronic, the NFL draft allows the worst teams in the league to pick from the best student athletes the NCAA has to offer every year. Typically, the worst five teams pick in the first five spots in the draft, and if they have the first picks, they will have the best chance of turning around a sorry-looking franchise – or so goes the theory.

Given the sheer number of athletes available for the draft and human overthinking that can come into any decision, it’s no wonder that visitors of NFL betting apps have a field day choosing who might be top-five picks. Bad front office decisions are magnified when you are picking in the top five of the draft.

With Week 1 of the 2022 NFL season right around the corner, what are the chances that this year’s top-five drafting teams can turn their fortunes around and end the year in the playoffs? At Bookmakers.com, we have delved into teams picking in the top five since 2000 and seen how successful they have been with those picks to help us make a prediction. For the purposes of this research, we regarded any playoff trips within five years of a top-five pick as successful.

How Often Have Teams Reached the Playoffs After Picking in the Top 5?

Since the 2000 NFL draft - not including this current year’s class, which has yet to take the field in a regular season contest – there have been 110 picks made in the top five. That gives us ample sample size to see how teams might fare this season based on the historical data.

Of those 110 picks, a total of 27 teams have reached the playoffs from a position in the top five, meaning that every year, on average, there has been at least one team to have qualified for the postseason.

In practice, not every year has seen a team reach the playoffs. In six seasons since 2000, there have been no teams picking from the previous draft’s top five playing postseason football in January, with the most recent being 2018. 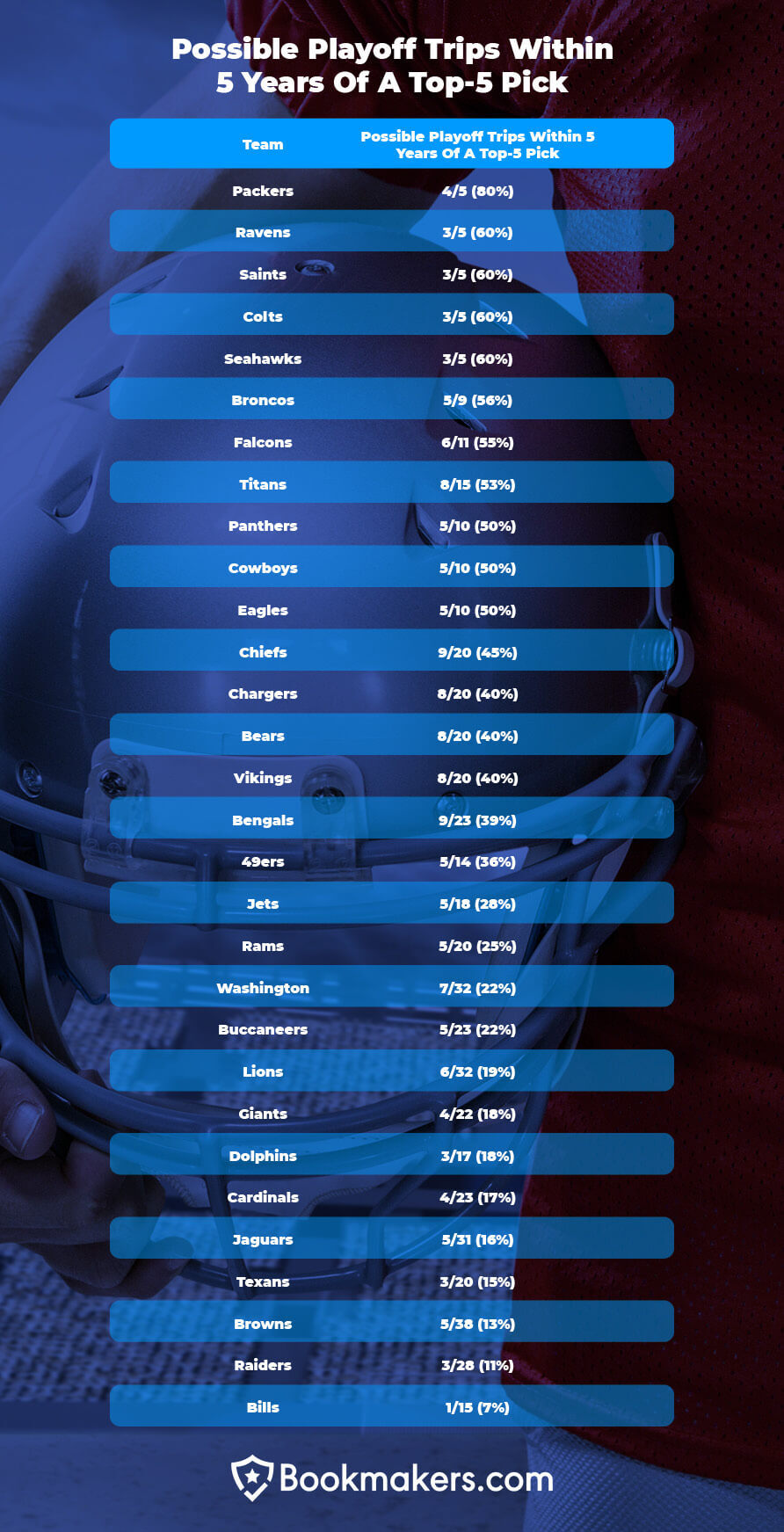 Do This Year's Teams Have Reason to be Optimistic?

Picking within the top five will inherently make the fanbase at least slightly optimistic as to their team’s chances for the following few seasons, given how valuable that pick can be. But looking at historical data could help tell us whether this year’s top-five pickers should be thinking Super Bowl or not.

Take the Jacksonville Jaguars. 2022 was the second year running they have held the first overall pick, which doesn’t provide immediate cause for optimism. Since 2000, they have had six picks inside the top five that have had a chance to reach the playoffs within five years of being selected (last year’s first pick Trevor Lawrence has had just one year so far), and they have yielded a total of five playoff trips from a possible 31, which equates to 16 percent. While teams picking in the top five are generally there for a reason, it doesn’t inspire confidence about a deep run. One potential gleam of light is the fact the Jaguars picked inside the top five in 2017 and also reached the playoffs that season, so they have previous, but it is just one instance from seven tries.

No team in the NFL has had more top five picks since 2000 than the Detroit Lions. That in itself doesn’t immediately spark optimism in the fanbase. The fact they have had six playoff trips out of a possible 32 doesn’t help either. The Lions have also failed to reach the playoffs the first year after a top five pick in that timeframe in seven attempts.

Outside of picking in the top five three times within the first five years of their existence, the Houston Texans have only done it twice in the last 16 years. This year’s third overall picking team have previously had just three playoff trips from a possible 20. Given the state of the roster last season, perhaps that number will remain low for the foreseeable future. History also suggests the Texans may struggle to reach the playoffs this year, as five previous times after picking in the top five they have failed to reach the postseason.

The New York Jets have picked in the top five four seasons out of the last five and seven times in total since 2000. There is an argument that with so many recent top-five picks, they should be due an upturn in form. Five playoff trips out of a possible 18 since 2000 suggests they are better placed than most to turn things around. They have also previously (2006 and 2009) reached the playoffs the next season after picking in the top five, which is only bettered by the Washington Commanders’ three instances of that happening since 2000.

The final pick inside the top five this year was made by the New York Giants. When Eli Manning was running the show for the Giants, they didn’t make many trips to the top of the draft, but it’s been a different story in recent times with three top fives in the last five seasons. In total, they have reached the playoffs four times from a possible 22 and qualified for the postseason the season directly after picking a player in the top five. 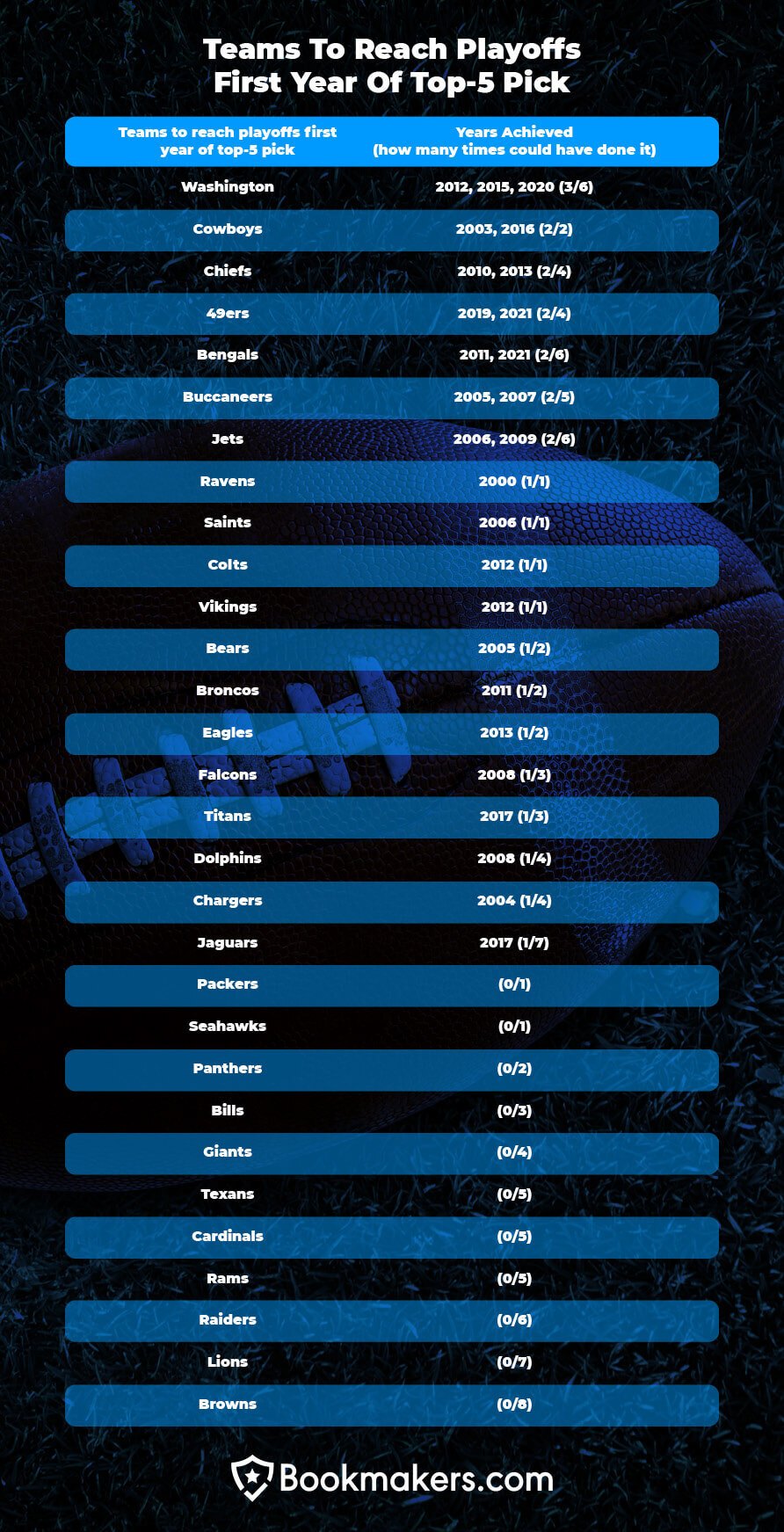 Who Are the Picks This Year?

Some of the numbers produced by teams in the past will come down to poor decision making when picking, but front offices and fanbases alike will be hoping that isn’t the case this time around. Who are the players expected to help turn around their teams’ fortunes?

It was anticipated for much of the draft cycle that Michigan’s defensive end Aidan Hutchinson would be the number one overall pick before the Jaguars pivoted in the final days to select Georgia defensive lineman Travon Walker. That means Michigan native Hutchinson had a homecoming with the Lions.

The Texans and Jets then went defensive back with their picks. Derek Stingley Jr. and Ahmad Gardner were third and fourth, respectively, and edge-rusher Kayvon Thibodeaux rounded out the top five.

The fact these are some of the favorites for the defensive rookie of the year award come the end of the season suggests they have every chance of helping to turn things around for their teams.