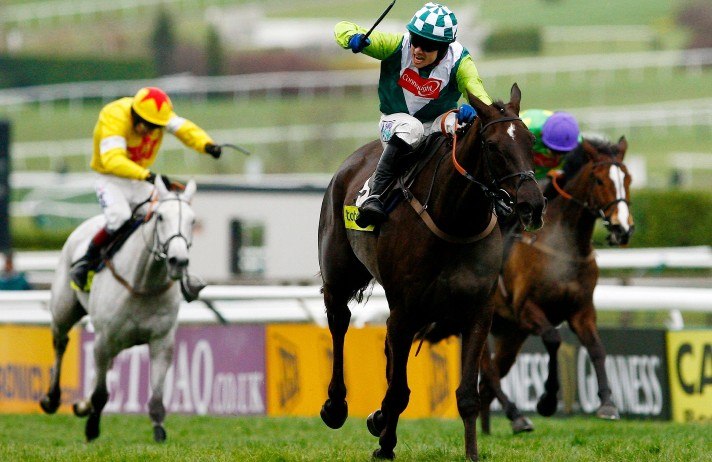 In any list of great National Hunt races, the clash between Arkle and Mill House in the 1964 Cheltenham Gold Cup really has to be top. It is one of those clashes that is at once an iconic event in the history of racing, and a significant entry in the pantheon of sport.

The British couldn’t see Mill House dethroned; the Irish wouldn’t hear of defeat for Arkle. Mill House was The Big Horse, the reigning champ, winner of the Gold Cup the previous year as a whipper-snapper six-year-old. They didn’t know it then, of course, but there wouldn’t be another six-year-old Gold Cup winner for almost 50 years.

Arkle was Ireland’s great hope, winner of the Milltown Novices’ Chase at Leopardstown, winner of the Broadway Chase at Cheltenham in 1963, the modern day Brown Advisory Chase. If you said Himself, everyone knew to whom you were referring, and if you wanted to get a postcard to him, Arkle, Ireland, would do it.

The pair of them had met once before the 1964 Cheltenham Gold Cup, in the 1963 Hennessy Gold Cup at Newbury, with Mill House conceding 5lb to Arkle and beating him into third place. There was that slip by Arkle at the third last fence though. There was unfinished business.

Even so, the horse racing betting market fully expected Mill House. And it was the Fulke Walwyn-trained horse who led early under Willie Robinson. Arkle was keen in behind the leader, towards the outside, Tom Dreaper’s horse wanting to go faster than Pat Taaffe wanted him to go, and running the risk of unnecessarily expending energy that he would need later in the race. Indeed, when Mill House skipped over the 15th fence in front, and Arkle got in tight and landed a little flat-footed, and his rider niggled him along a little on the landing side, it looked like the contender would struggle to reel in the incumbent.

But Arkle travelled well down the hill and jumped the second last fence within a half a length of the leader. "Now they’re rounding the home turn," said Peter O’Sullevan in commentary, “and this is it!”

Arkle moved up on the outside under Pat Taaffe as Willie Robinson drew his whip on Mill House. Arkle moved ahead on the run to the final fence and jumped the fence well. Mill House rallied on the far side, but it was Arkle who proved to be the stronger on the run up the hill to land the first of his hat-tricks of Gold Cups.

“This is the champion,” said Peter O’Sullevan. “This is the best we’ve seen for a long time.”

Kauto Star v Denman is the closest that we have come to Arkle v Mill House in modern times. There wasn’t a national divide in this one; indeed, they were both housed in the same yard, trained by the same trainer; neighbours, literally, living next door to each other in Paul Nicholls’ yard at Ditcheat, but it didn’t diminish the intensity of the rivalry, nor the depth of support that each horse enjoyed from their respective fans.

People declared their allegiances, Denman or Kauto. Denman The Tank, winner of the Lexus Chase, winner of the Royal and Sun Alliance Chase, winner of the Hennessy Gold Cup under a champion’s weight, the mullucker who galloped and galloped and didn’t stop. Kauto the fleet-footed, the dual King George winner (and he would win three more), the 2007 Gold Cup winner who had also had the pace to win two Tingle Creek Chases over not even two miles. Racing fans wore scarves and baseball caps – Denman or Kauto – in a media frenzy that spilled out over racing’s confines and into mainstream.

Denman set off in a prominent position, as he usually did, just up on the outside of the early leader Neptune Collonges, another stable companion, as Kauto settled into his rhythm just behind, third place and along the inside. Denman jumped to the front with a circuit to go and started to turn the screw.

Kauto moved well in behind though, Ruby Walsh motionless on his back. He moved easily down the back straight as Sam Thomas on Denman stole a peak in behind to see where his main rival was. Kauto got in a little tight to the fifth last fence and, for the first time in the race, Ruby Walsh started to ask him to get closer.

“Denman’s got him at it!” said Richard Hoiles in commentary, and the crowds in the bulging enclosures responded.

As they raced down the hill to the third last fence, Sam Thomas had the luxury of another look around him, where he would have seen Ruby Walsh hard at work, six or seven lengths behind. Denman soared over the third last and raced to the home turn, all of 10 lengths in front of his closest pursuer. The leader’s biggest dangers at that point were the two birch obstacles that lay in front of him, and he cleared those obstacles with ease before galloping up the hill and into history.

This was a clash of the generations, Moscow Flyer the 10-year-old, and all his accolades. Start with his hurdling career if you want: a Royal Bond Hurdle, a Champion Novice Hurdle, a December Festival Hurdle, a Punchestown Champion Hurdle, and all those battles with Istabraq. But Moscow was even better over fences than he was over hurdles.

Azertyuiop was a worthy adversary. Paul Nicholls’ horse had won the Arkle in 2003, and he had won the Champion Chase in 2004, after Moscow had departed at the fourth-last fence. He went into the 2004 Tingle Creek Chase on a high too, having won the Haldon Gold Cup at Exeter a month earlier.

Well Chief was the coming force, the whipper-snapper five-year-old who had won the Arkle and the Maghull Chase the previous season as a novice. Martin Pipe’s horse was half Moscow’s age. Moscow had won 12 races, including six Grade 1s, before Well Chief first set foot on a racecourse.

Barry Geraghty said before the 2004 Tingle Creek that he would move to the front on Moscow Flyer before they reached the Pond Fence, the third last, and that, on the approach to the fence, he would look around and he would sit. He said that he wouldn’t ask his horse for his effort until after the Pond Fence.

That’s exactly what he did. A good jump at the final fence in the back straight took Moscow into the lead, up on the inside of Cenkos. Azertyuiop moved easily in behind, but Moscow travelled well in front too. And, sure enough, on the run to the Pond Fence, Geraghty had a long look behind him as Moscow pricked his ears and waited for the command. Moscow got in tight to the obstacle, but he was quickly back in his rhythm, so much so that his rider had another look over his left shoulder.

He didn’t ask Moscow to pick up then either, he just niggled him along down the to second-last fence, with the horse’s long ears sticking straight up in the air. Moscow pinged the penultimate fence, and then Geraghty said go. When he did, his horse responded. Azertyuiop and Well Chief challenged, but Moscow was still two lengths clear at the last, and his 10-year-old legs carried him, sprightly as you like, up the hill and across the winning line in a cacophony.

The late 1970s was the golden age for hurdlers. Monksfield, Sea Pigeon, Night Nurse, Bird’s Nest, Dramatist, Beacon Light. Iconic names that tell you that, actually, nostalgia really is as good as it used to be.

Sea Pigeon was two years older than Monksfield, but he was just as sprightly. Peter Easterby’s horse’s versatility had seen him win two Chester Cups, and he would later win an Ebor, to go with his Fighting Fifth Hurdle and his two Scottish Champion Hurdles. And he would have his day too in the Champion Hurdle at Cheltenham, two days in fact, but they would have to wait.

Monksfield led from early in the 1979 Champion Hurdle, from Kybo, Beacon Light and Bird’s Nest, with Sea Pigeon held up in behind. Dessie Hughes kept Monksfield wide as they raced down the back straight, in search of the better ground, but he retained his position at the head of the field, jumping well.

Dessie had to niggle him along a little at the top of the hill, as Beacon Light and Kybo both moved up towards his outside, but that was Monksfield’s way, the little terrier that he was, you knew that he would keep finding. Beacon Light came under a ride and Kybo came down at the second last flight, but it still looked ominous for Des McDonogh’s horse as Sea Pigeon moved up easily on his inside as they rounded the home turn.

Sea Pigeon actually rose to the final flight with a fractional advantage, and he led on the landing side, but Monksfield battled back tenaciously on the near side, wrested the lead back with 150 yards to run and moved on to just get the better of his old rival by the time they got to the winning line, with the pair of them miles clear.

It’s not all about nostalgia and sepia-tinted glasses, mind you, and just because Shishkin v Energumene was less than a year ago, that doesn’t mean that the race doesn’t deserve a place high on the list.

Both horses were unbeaten over fences going into the race. Shishkin was six for six, a Wayward Lad Chase, an Arkle, a Maghull Chase and a Desert Orchid Chase already on his CV, to go with his Supreme Novices’ Hurdle. Energumene was five for five over fences, Willie Mullins’ horse had won the Irish Arkle and the Ryanair Chase as a novice, and he had danced in in the Hilly Way Chase at Cork on his debut last season, six weeks before the Clarence House Chase.

Conditions favoured Energumene, right-handed, soft ground, but the market and the leading horse racing betting apps favoured Nicky Henderson’s horse, just. 5/6 and 5/4 they said just before the off.

There was early drama too. Energumene flowed along in front under Paul Townend, fluent as a river, with Shishkin just behind him and towards the outside. If you were marking it, you would have marked Energumene’s early jumping as slightly better than Shishkin’s, and that was before they got to the sixth fence, the third fence away from the stands and into Swinley Bottom, when Shishkin stumbled slightly on landing.

Shishkin was quickly back into his rhythm for Nico de Boinville, but he had ceded the initiative. As they raced around the home turn with two fences to jump, Paul Townend was still almost motionless on Energumene, as de Boinville was starting to get animated on Shishkin, who had about a length-and-a-half to make up.

Energumene travelled comfortably down to the second last fence and jumped it well. He picked up too when his rider asked him to on the landing side, which was probably around about the point at which Energumene traded at 1.13 in-running and Shishkin hit 7.8. But Shishkin dug deep, got going again on the run to the last, jumped the obstacle well and stayed on strongly on the near side to get up and beat his gallant adversary by a length in a thriller.