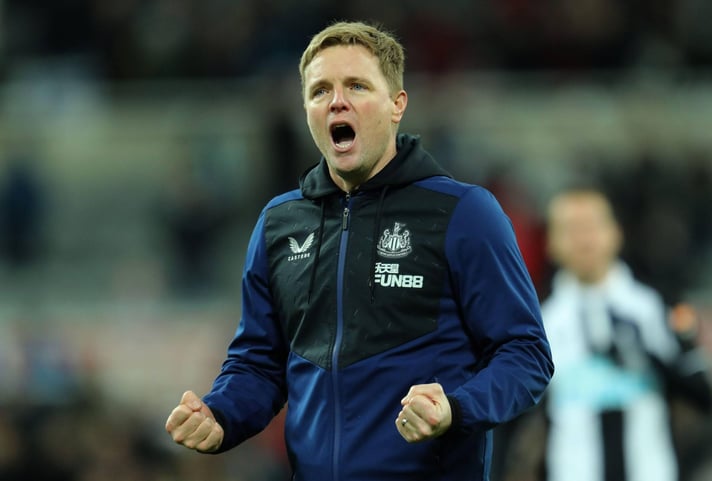 When Eddie Howe arrived at Newcastle last November, the situation for the new cash-rich club was as bad as you can imagine for a Premier League team.

Online sports betting sites had them as one of the favourites to be relegated to the Championship, as the Magpies sat in 19th position with only five points having not won at all in their 11 games up to that point.

Steve Bruce had done an admirable job before that, but the turnaround since Howe’s appointment – even taking into account the vast riches available to him – has been remarkable.

A few astute January signings and a much clearer tactical plan has seen the Magpies move into the top half of the table on 43 points, and it’s not beyond the realms of possibility that they will end the campaign there.

That was something soccer betting sites really couldn’t have foreseen before the former Bournemouth boss made the switch to St James’ Park.

Howe Is Perfect For Newcastle’s Here And Now

Things could have been very different for Howe, however. He had long been linked with following the path Leicester boss Brendan Rodgers once took to Premier League rehabilitation by heading north to Celtic.

It looked almost certain to happen, but a row over his backroom staff prevented him going to Glasgow, and then the Newcastle opportunity proved too good to turn down.

Howe and the club wasted no time in splashing the cash in the January window, but instead of making vanity signings, Newcastle have bought wisely so far.

Players with Premier League experience like Chris Wood, Kieran Trippier, Dan Burn and Matt Targett came in, and they were added to with a sprinkle of stardust with the purchase of highly sought-after Brazilian midfielder Bruno Guimarães from Lyon.

At one time or another, all of these signings have contributed to Newcastle’s rise up the table as they’ve knitted perfectly into the more passing-oriented style that Howe has implemented since he took over.

One man who has been impressed with Howe’s impact on the Geordies, is former Newcastle striker Andrew Cole, but he is also warning the former Burnley boss that the fans will expect much more next season.

“You'd have to be happy with the job Eddie Howe has done at Newcastle,” Cole told Bookmakers.com.

“He's gone there and got them out of the relegation fight. But they were also the only club in the division that could have gone out and spent £90m.

“However, he has brought in players that have helped to get them out of the position that they were in. The question is next season, will some of those players be able to bring Newcastle to the next level? We will have to wait and see.”

Asked if he believes Howe is now safe in his position as Newcastle manager, Cole felt he shouldn’t be sitting comfortably just yet.

“Football is such a precarious game, you never ever know what can happen,” said the Premier League legend.

“He has kept them up and has got them playing some good stuff. Come next season, though, the expectations are going to be much higher than they are now.”

Patience Is Needed With Project Newcastle

Those ownership models (either by state or oligarch), while the stuff of supporters’ dreams on the financial side of things, do come with problematic issues, such as sportswashing accusations, legitimate human rights questions and even invasions of sovereign nations.

But, in purely football terms, money fixes a lot, but it does take time to take effect. In Chelsea’s case back-to-back Premier League titles followed almost instantaneously after the Roman Abramovich takeover. However, his ultimate goal of the Champions League eluded him for nine years.

Meanwhile, despite their takeover by Mansour bin Zayed Al Nahyan in 2008, Manchester City are still yet to win Europe’s premier club competition, and it actually took them three years to even win the Premier League for the first time after their new owner’s arrival.

When we spoke to Cole, he was also keen to stress to Newcastle fans that Rome wasn’t built in a day, and it may take several years for the Magpies to be challenging at the right end of the table.

“It is certainly going to be an interesting watch to see what Newcastle do in the summer,” said the man who made 68 Premier League appearances in the famous black and white shirt.

“Of course, they are going to go again in the transfer market. That's why the new owners bought the club, and it will be interesting to see what kind of players they can entice there.

“I don't think they are going to rest on their laurels. But, with Newcastle, things are going to take a little bit of time. They won't be able to run before they can walk.

“They have a hell of a lot of money, but they must try to get the right players there to propel them forward.

“Regardless of how much money the owners have, to be competing to try and win the Premier League – along with the Champions League – doesn't happen in one season. That's impossible!

“We still have to wait and see what the Newcastle project is.”

You can back Newcastle at +300 with Ladbrokes to finish in the top half of the Premier League this season.