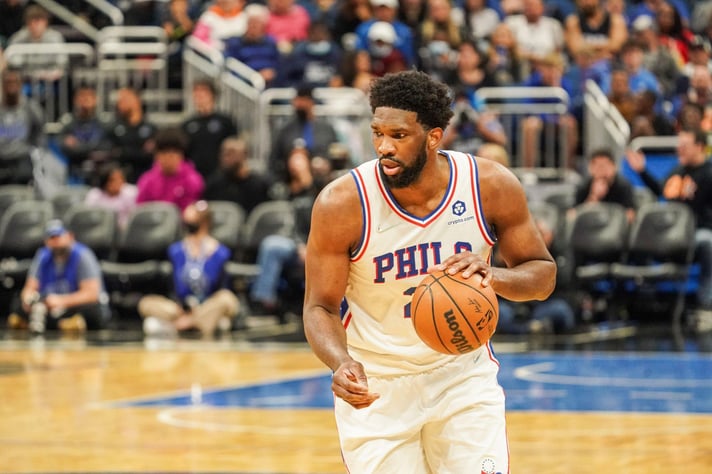 The NBA is full of superstars, and Joel Embiid of the Philadelphia 76ers is among the game’s best players. After starting his career unable to play back-to-back games due to injuries, Embiid has exploded to become one of the most dangerous centers in the game. After his best season yet, Embiid league’s scoring leader in the 2021/22 season. And he was a popular MVP pick at NBA betting sites prior to this season.

However, the Cameroonian player took his game to new heights by breaking an NBA record in his latest outing. This was one of the most dominant performances ever seen. It could also act as a springboard for Embiid’s season, which will have plenty more people jumping on the Embiid for MVP bandwagon on NBA betting apps.

Read on to discover more about Embiid’s record game, how his team has been playing and an outlook on the rest of the NBA season.

Who is Joel Embiid?

Joel Embiid was the Philadelphia 76ers’ first pick in the 2014 NBA draft and the third pick overall. He played one season for the University of Kansas Jayhawks before being drafted.

Since joining the NBA, Embiid has been an NBA All-Star five times and made the All-NBA Second Team five times. Most of his success has come since 2018 when Embiid jumped from 22.9 points per game to 27.5 points per game in just one year. In 2021/2022, he became the first center to lead the NBA in scoring since Shaquille O’Neal in 2000.

The Philadelphia 76ers defeated the Utah Jazz by a score of 105-98 in Embiid’s landmark game. Embiid became the first player ever to record 50 points, 10 rebounds, five assists and five blocks since the NBA started taking official stats for blocks in 1973-74. His overall stat line at the end of the game was 59 points, 11 rebounds, eight assists and seven blocked shots.

Embiid’s record becomes even more impressive when considering how important this was to his team. On his own, he accounted for more than half the points the 76ers scored. The game was pretty close, and Embiid scored 26 of the 27 76ers points in the fourth quarter to ensure the franchise came out with a win.

This was also the fifth-most scored in an NBA game for the 76ers, with Embiid just one point off Allen Iverson’s 60-point game in 2005. Unsurprisingly, Hall of Famer Wilt Chamberlain holds the top three spots for most points scored in a 76ers game, with 68, 65 and 62, respectively.

How has Embiid Played this Season?

Embiid started the season strongly and is averaging 32.3 points a contest. If he keeps up this roll, he would be a pick at betting sites to repeat as scoring champ. In October, he and the team made a slower-than-expected start to the season, but he exploded for a 40-point, 13-rebound game in a losing effort against the San Antonio Spurs. This was during a run in which the team lost its first three games and only claimed two out of eight wins in the month.

Pressure has been building on the 76ers after its poor start, with James Harden out with a foot injury. However, November seems to have taken Embiid and the 76ers to the next level. Including his record-breaking game, he has averaged 40 points per game as the 76ers have won three out of four matchups. He has improved his averages in every category, including rebounds, assists, blocks and steals.

The historic game against the Jazz came just 24 hours after Embiid had wiped the floor with the Atlanta Hawks. He scored 42 points in that game, meaning the center scored 101 points in 24 hours.

While Embiid and the 76ers are more focused on turning the season around, fans may wonder if this will push the huge center back into the conversation to win MVP. He has come close over the years, finishing second twice and losing out to Denver Nuggets player Nikola Jokic both times. Jokic also plays center, which is why Embiid hasn’t made the All-NBA First Team despite his fantastic play. His current price of +1500 on the best betting apps could prover very valuable come the end of the season.

If the team gets Harden back, defenses will have to pay less attention to Embiid, which could lead to the big man putting up more massive games. After he scored 101 points in a day, very few players can claim to be as dominant as Embiid.