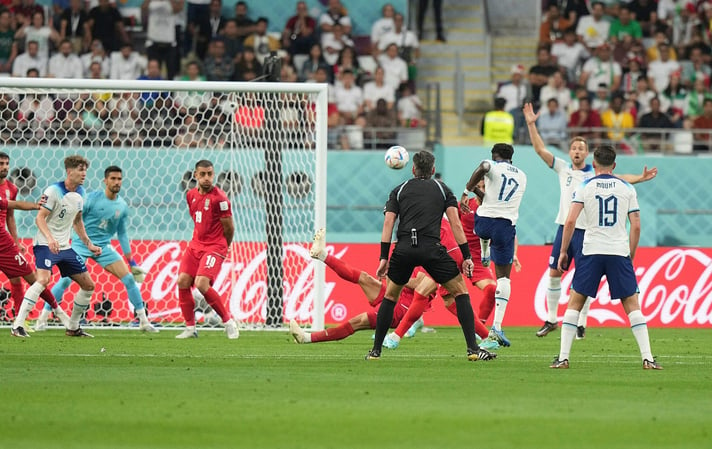 The 2022 World Cup is well and truly underway now. We’re sure to see some big upsets, huge victories and massive scorelines. England got their World Cup campaign off to an impressive start today with a 6-2 win over Iran. While the result wasn’t really in question at World Cup betting sites, with England 1/3 (-300) favorites to win the game before kickoff, not many bettors will have had the correct score. A 6-2 win for England was available at an astonishing 450/1 (+45000) before kick-off on the best soccer betting sites.

One of the bigger talking points from the game was the injury to Iran goalkeeper, Alireza Beiranvand. After suffering a head injury, he remained down for a number of minutes. Seemingly trying to continue, play resumed after a long stoppage before the shot-stopper was stretchered off and replaced by Hossein Hosseini.

From there, the result was in little doubt. England took the lead in the 35th minute thanks to a towering Jude Bellingham header. Arsenal's Bukayo Saka added a second in the 43rd minute before Raheem Sterling made it 3-0 before the break. The second half took some time to get going, but five more goals were to come.

Substitutes Marcus Rashford and Jack Grealish scored late goals to add to Saka’s second, which came just after the hour mark. Iran saved face with two second-half goals from Porto forward Mehdi Taremi. He brought the score to 4-1 in the 65th minute, before adding a second from the penalty spot in the 13th minute of second-half injury time. This was on top of the 14 minutes of first-half injury time – a total of 27 minutes for the game in all!

It was a very impressive performance from England. Some will be quick to point towards the questionable quality of the opposition, but Iran are ranked 20th in the FIFA world rankings, so the win certainly isn’t without merit.

Tottenham striker and England captain Harry Kane played a pivotal role in the game without getting on the scoresheet but appeared to pick up a knock prior to being substituted in the 75th minute. Bettors at top soccer betting sites will be keeping a close eye on his progress, as he was the favorite to be World Cup top goalscorer.

With their World Cup opener out of the way, England have shortened in the World Cup outright betting. They’re generally around 7/1 (+700) to win, and are third favorites behind Argentina and Brazil.

Next up for the Three Lions is a Friday game against the USA. As odds-on favorites for that game, the odds compilers at sports betting sites appear to have made their minds up already. England seem less reliant on Harry Kane’s goals, and with so many threats and a squad full of young, attacking options, who’s to say another high-scoring game isn’t in store?

USNMT fans and bettors will be given encouragement by the fact that England conceded two goals against a team who were massive underdogs. It’s unlikely we’ll see a correct score in the rest of the 2022 World Cup that has bigger odds than today’s 450/1 winner. A US win on Friday certainly wouldn’t be a shock of that kind of magnitude, but it would certainly be a surprise in its own right.