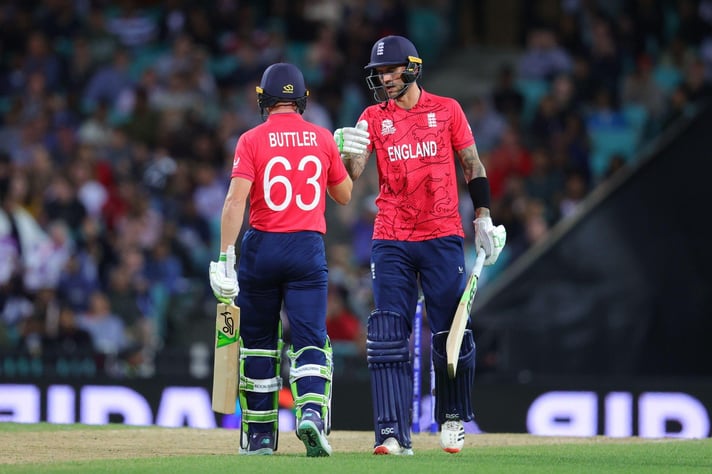 England openers Alex Hales and Jos Buttler made light work of their chase to thrash India by 10 wickets and move serenely into the T20 World Cup final Thursday. Having restricted India to what appeared to be a par score of 168-6 thanks in large part to the spin of Adil Rashid and Liam Livingstone, Hales and Buttler kept England’s scoring rate over 10 an over to lead England to Sunday’s final in just 16 overs.

They will face Pakistan at the Melbourne Cricket Ground Sunday. The two teams have played each other eight times since the start of September, with England coming out on top five times, so they are likely to be favorites at cricket betting sites before a ball is bowled. The dominance of England in dismantling India on Thursday will also play a part in the likely odds. Hales finished on 86 from 47 balls and skipper Buttler with 80 off 49.

In what was something of a mirror image of the first semi-final between New Zealand and Pakistan Wednesday, India started their innings slowly before late power hitting brought them up to a seemingly somewhat defendable total. Without Hardik Pandya’s violent 33-ball 63, the score England were chasing would have been even smaller.

Knowing they needed early wickets to keep England quiet, India conceded 63 from the powerplay, and England never looked back as Hales and Buttler combined for 13 fours and 10 sixes to canter to victory in a record partnership

Pakistan hosted England in a seven-match series in September, which England thrillingly won 4-3 having taken the last two contests. They then played in a warm-up match prior to the T20 World Cup, in which England chased down 161 inside 15 overs.

With that in mind, it is likely that England will enter the contest as favorites at the best betting sites. However, Pakistan appear to be a much different proposition to the one England faced in Brisbane with Shaheen Shah Afridi having picked up nine wickets in the last three games alone and both Babar Azam and Mohammad Rizwan returning to form with half-centuries in the semi-final win.

After England were made to work hard for their place in the semi-finals, they could be rounding into form at the right time too, however.

What To Look For In the Final

Of the remaining players left in the tournament, Pakistan have two of the leading wicket-takers in Afridi and Shadab Khan. They both have 10, while Sam Curran also has 10 and England will be sweating on the fitness of speedster Mark Wood who missed the semi-final but has nine wickets thus far.

Both Hales and Buttler now have over 200 runs in the tournament each, while Pakistan’s top scorer so far is Rizwan with 160. All of this should lead up to a thrilling final with plenty of wagering opportunities on betting apps.