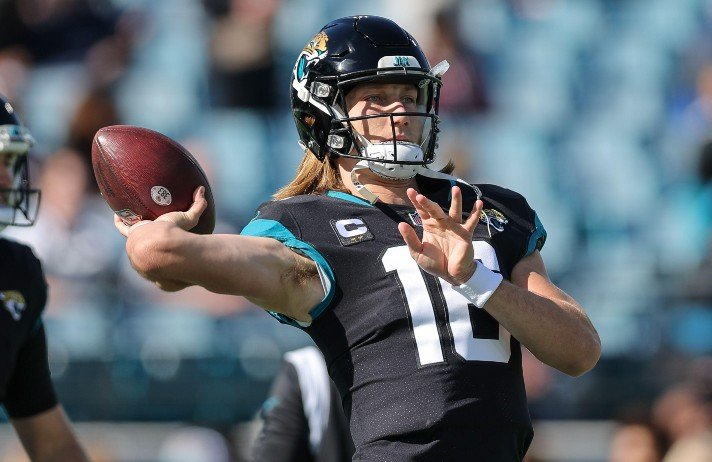 The NFL playoffs get under way this weekend with the Wild Card Weekend. Seven teams in each conference have a chance of hoisting the Vince Lombardi Trophy in Arizona on Sunday 12 February. As expected, some of the pre-season favorites have successfully navigated their way through the regular season, while others have exceeded the expectations of the leading NFL betting sites to make the postseason.

We take a look at how the Super Bowl odds have fluctuated throughout the course of the season. 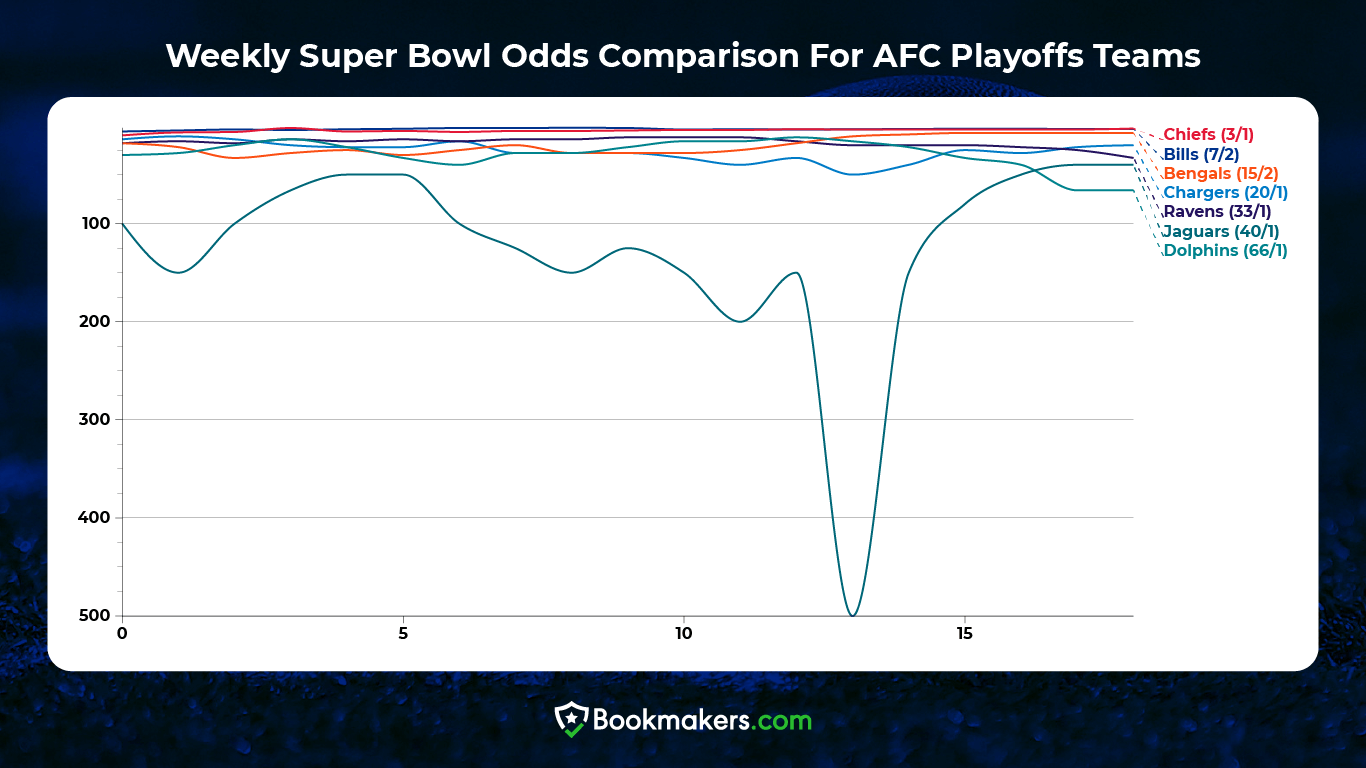 Of the seven teams in the AFC to make the playoffs, the Jacksonville Jaguars have the best story to tell. They managed just four wins in 33 games in their previous two seasons, which led to the acquisition of quarterback Trevor Lawrence and defensive end Travon Walker with their first overall draft pick in the last two years.

They turned to Doug Pederson to coach the team hoping he could clear up the mess left by Urban Meyer who was sacked midway through the 2021 season. Expectations for Pederson were low, but the coach who delivered a Vince Lombardi Trophy to Philadelphia five seasons ago, has brought playoff football back to the city. Pederson turned the team around, brought the best out of Lawrence, and won the AFC South division.

The Jaguars could have been backed at +10000 (100/1) before the first snap of the regular season, and even as recently as the start of December following their 40-14 loss to the Lions, Jacksonville were +50000 (500/1) to win Super Bowl LVII on NFL betting apps. Their record fell to 4-8 after that defeat, but they finished the season with five straight wins including the crucial win-and-they're-in division title decider with the Titans last weekend.

Their odds of landing their first-ever Super Bowl title are 40/1 ahead of their wild card game at home to the Chargers. If they can figure out a way of starting games faster, then those odds will decrease as they progress. The Jaguars have not scored the first points in eight of their last nine games, but they are 7-2 in those matches.

The Miami Dolphins are the rank outsiders to win Super Bowl LVII. Head coach Mike McDaniel has done a great job in his first season in charge, guiding the Dolphins to their first playoff appearance since losing 30-12 at the Steelers in the wild card round in 2016. Miami has not won a playoff game since beating the Colts 23-17 in December 2000, one season after Hall of Fame quarterback Dan Marino retired. That's the longest drought in the AFC, and only Detroit's 30-year wait is longer.

Since that victory over Indianapolis, the Dolphins have had 24 different starting quarterbacks, but with no success in the postseason. Tua Tagovailoa is Miami's current incumbent under center, but the third-year quarterback has been in the league's concussion protocol more times than the playoffs. Tagovailoa will miss Saturday's wild card game in Buffalo because of his latest concussion, making it very difficult for the Dolphins to progress to the divisional round next weekend.

Buffalo Live Up To Pre-Season Billing

Before the season started, the Buffalo Bills were installed as favorites to win Super Bowl LVII. In Josh Allen, the Bills have a dynamic quarterback who can punish teams with his passing and his running. And they also have one of the best defenses in the NFL. If that wasn't enough, their two kickoff returns for touchdowns against the New England Patriots in their final regular season game, showed that their special teams are pretty dangerous too. Buffalo's Super Bowl odds have shortened from +600 (6/1) in the pre-season to +350 (7/2) now.

But the number one seed went to the Kansas City Chiefs who finished the season with a 14-3 record. It's the fourth time the Chiefs have secured a first-round bye in the five seasons Patrick Mahomes has been their quarterback. Buffalo played one game fewer than the Chiefs because of their game against the Bengals in Cincinnati in Week 17 being canceled by the NFL following the cardiac arrest suffered by Bills safety Damar Hamlin. The Chiefs opened the season at +1000 (10/1), but they are the current favorites at +300 (3/1)

The Bengals were the AFC's representative in last season's Super Bowl, where they were beaten by the Rams by three points. Cincinnati has a chance to go one step further this season after ending the regular season with a 12-4 record, and their eight-game winning streak is the best of any of the AFC teams. Cincinnati has gone from +1800 (18/1) in August to +750 (15/2).

The Baltimore Ravens go into the playoffs with back-to-back losses and huge uncertainty surrounding their quarterback Lamar Jackson. Jackson, who becomes a free agent in the offseason, has missed Baltimore's last five games because of injury and his status for this wild card game is uncertain. The Ravens are 2-3 in those recent games without Jackson and their odds have drifted from +3300 (33/1) before the season started to +3300 (33/1) on sports betting apps. 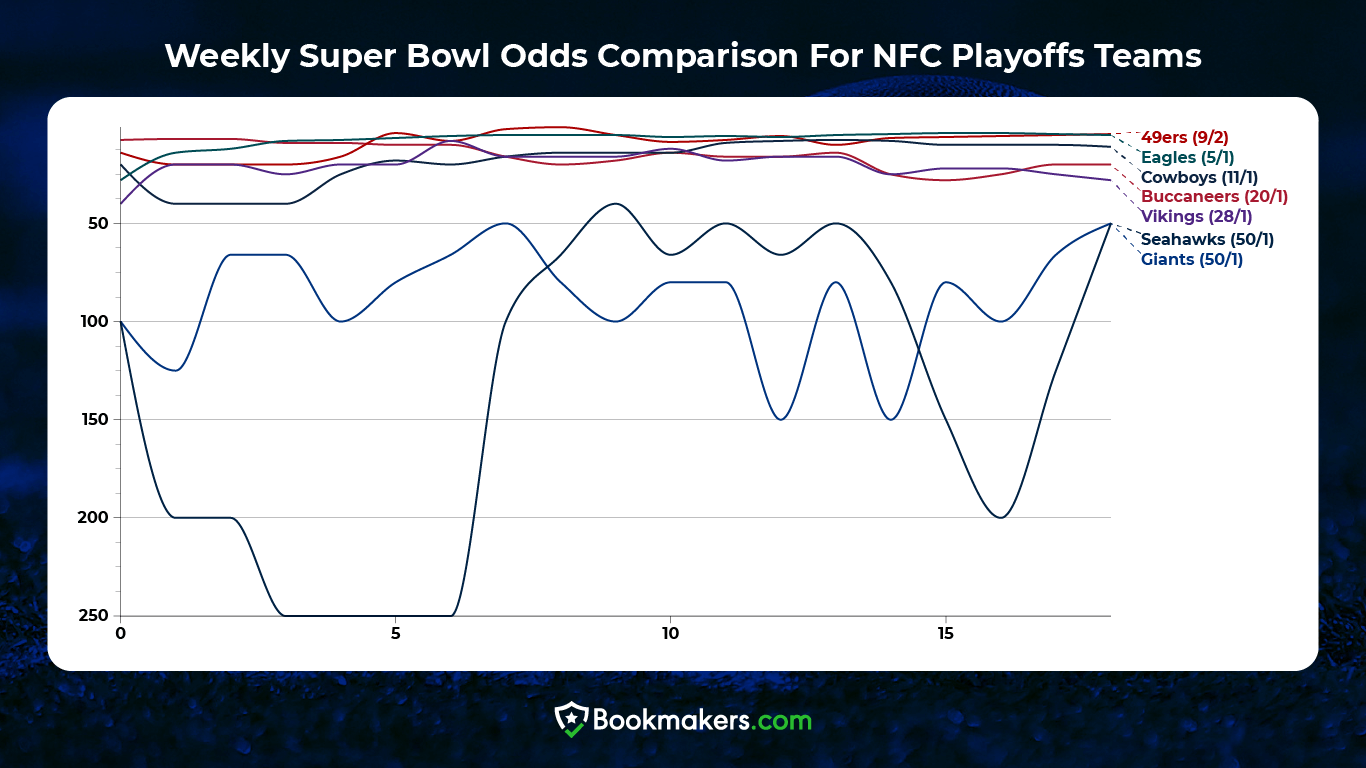 What a season it has been for the Seattle Seahawks. In the off-season, they traded starting quarterback Russell Wilson to the Denver Broncos, which led to many fans questioning Pete Carroll's logic. But the NFL's oldest head coach knew what he was doing. He saw something in Geno Smith that gave him optimism for the season ahead.

And with one of the best drafts of any team in recent seasons, Seattle surprised a lot of teams in 2022. Running back Kenneth Walker and cornerbacks Coby Bryant and Tariq Woolen have all impressed in their rookie seasons. Opening the season at +10000 (100/1), the Seahawks drifted to +25000 (250/1) after a 3-3 start to the season.

Those odds dropped to +400 (40/1) after beating the Cardinals 31-21 in Arizona, but that's as low as their price has got. An indifferent end to the season that saw them lose four of their last seven games has seen their odds going into the playoffs settle at +5000 (50/1). Smith will have to be at his very best if Seattle is to beat the 49ers in San Francisco on Saturday. Check out our Wild Card Weekend betting preview for the latest odds and spreads.

It's been a long time between drinks for the New York Giants who celebrated a second Super Bowl in five seasons when Eli Manning guided them to another win over the New England Patriots in the championship decider in February 2012. Little did they know that the Giants would reach the playoffs once in the next 10 years.

That playoff appearance ended in a 38-13 loss to the Packers in Green Bay in January 2017. It followed an 11-5 season which remained New York's second winning season since their last Super Bowl-winning season. Daniel Jones guided the G-Men to a 9-7-1 record this season to earn their place in the postseason.

After finishing bottom of the NFC East with a 4-13 record last year, few expected much from Jones, who had struggled to convince supporters in the Big Apple that he could be the franchise quarterback to replace Manning. Odds of +10000 (100/1) greeted the Giants on opening day. Even at 6-1, the Giants could be backed at 50/1, and perhaps the bookmakers were right as they won just one of their next six games and their odds drifted to +15000 (150/1).

A trip to Minnesota to face the Vikings is a game they can win, but they need to start faster than they have. New York has not scored a first-quarter point in each of their last six games. Fancy the Giants to cause an upset? Check out our NFL picks page for the best odds.

49ers Consistent Throughout The NFC

When a team loses its starting quarterback, it usually dents a team's hopes of winning the Super Bowl. Losing the back-up severely reduced their chances of making the playoffs. But for every rule, there is an exception. This season, the San Francisco 49ers are the exception. Losing Trey Lance in Week 2 was a blow as was the injury to Jimmy Garoppolo, who had his season ended in Week 13.

Step forward Brock Purdy. Purdy was the last man selected in the draft to earn him the title Mr Irrelevant. A run to the Super Bowl will make him the most relevant player in the league. It was a rough start for the 49ers, but the NFL is not about how you start, it's about how you finish. Ten straight wins to end the season makes San Francisco the hottest team in the playoffs. During their dodgy start, their Super Bowl odds drifted to a season-high +2000 (20/1), but they are now +450 (9/2) to end their quest for a sixth Super Bowl trophy.

Elsewhere in the NFC, the Eagles claimed the number one seed after winning 14 games in the regular season for the first time in their history. Their odds started at +2800 (28/1) and they can now be backed at +500 (5/1). Moving in the opposite direction are the Buccaneers, who were 15/2 in the off-season, but are now +2000 (20/1) to be crowned champions for the second time in three seasons, with Tom Brady leading the offense. Check out the best NFL props for what Brady can achieve this weekend.