How The Super Bowl Odds Have Changed Through 12 Weeks 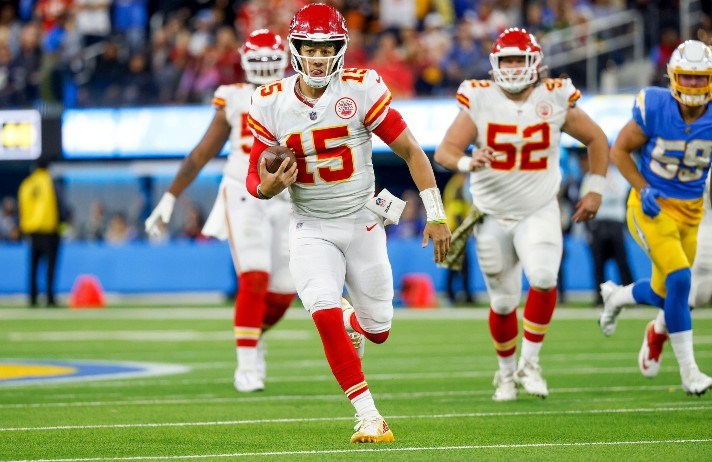 We are now in the final third of the NFL season, and what a season it has been so far. The league continues to provide dramatic storylines week after week. The NFL is proud of providing parity season after season to ensure we see different names in the playoffs which makes it one of the most interesting markets available with the leading NFL betting sites. If the postseason was to start ahead of the Week 13 slate of games, six teams, three from each conference who didn't make the playoffs last season, will be in this season.

In the AFC, the Baltimore Ravens, Miami Dolphins and the New York Jets are currently holding a playoff place, while in the NFC, the New York Giants, Minnesota Vikings and Washington Commanders will be extending their seasons. Some of the pre-season favorites have managed to negotiate their way through the season to this point, but for others, the season has been a struggle. So how have the Super Bowl odds changed from preseason to now? We've tracked the odds of the favorites in August and those who continue to challenge the oddsmakers.

Chiefs And Bills Live Up To The Hype

As soon as the 2021 season finished, the Buffalo Bills and Kansas City Chiefs were installed as early favorites to win Super Bowl LVII. The Chiefs were denied a place in last season's title game when they lost to the Cincinnati Bengals in overtime at Arrowhead.

It was the fourth year in a row that Patrick Mahomes and the Chiefs had hosted the AFC Championship game. Mahomes remains one of the best players in the NFL and while he is still lining up under center, the Chiefs will always be contenders to win it all. The Chiefs were 10/1 before the season started and after winning nine of their 11 games, including their last five, Kansas City are the 15/4 favorites with the majority of NFL betting sites to win their second Super Bowl in four seasons. 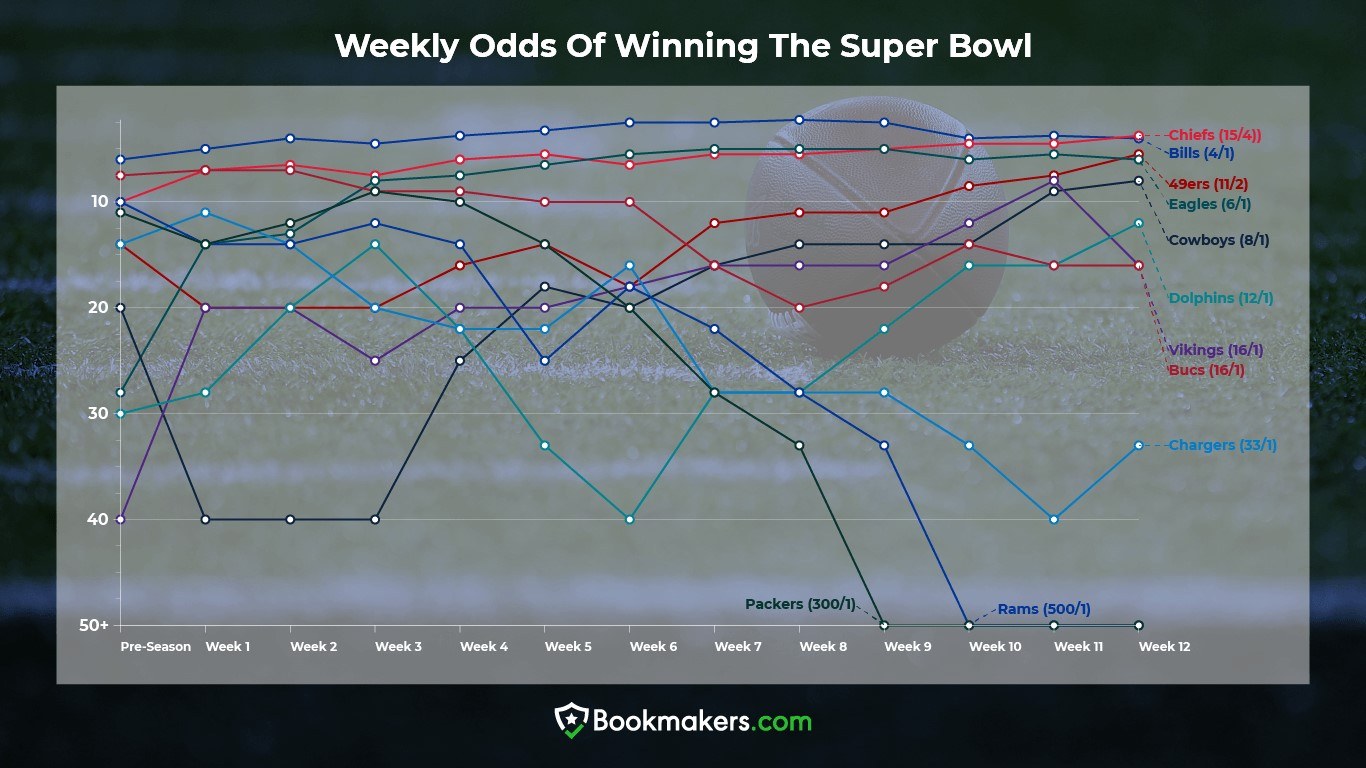 On their way to the AFC Championship decider, the Chiefs sent the Buffalo Bills packing with a 42-36 overtime win, again at Arrowhead. The game will be remembered for both sides combining for 25 points in the final two minutes with Mahomes driving the Chiefs 44 yards in just 10 seconds to set up Harrison Butker's 49-yard game-tying field goal as time expired. The Chiefs received the kickoff in overtime and marched downfield to win the game with Travis Kelce's eight-yard pass from Mahomes.

Despite the loss, Buffalo quarterback Josh Allen proved that he can lead his team to the Super Bowl. The Bills were 6/1 favorites to win the Super Bowl before the opening game of the season, and despite losing three of their 11 contests, Buffalo can be backed at 4/1 on many of the leading NFL betting apps.

Rams And Packers Drift Into Oblivion

A lot of money was placed on the Los Angeles Rams and the Green Bay Packers to be the NFC's representative in Super Bowl LVII. The Rams were 10/1 to run it back this season and become the first team since the 2004 Patriots to win back-to-back Super Bowls. Los Angeles were able to retain many of their stars from last season's title success and in Sean McVay, they have one of the brightest footballing minds in the game.

While their decision to give up future draft picks limited them to what they could do in the off-season, it meant they were unable to build a roster capable of coping with injuries. Injuries have hit them hard with quarterback Matthew Stafford, his back-up John Wolford, wide receiver Cooper Kupp all sidelined through injury. Defensive tackle Aaron Donald could miss a few weeks with an ankle injury. Things will get worse before they get better for the Rams who are now 500/1.

The Green Bay Packers are 300/1 to win the Super Bowl in Arizona on 8 February after opening the season at 11/1. The big news in the offseason was whether Green Bay's offense could continue to be prolific and win games without wide receiver Davante Adams. There was a feeling throughout the league that Aaron Rodgers would manage with a younger and less talented core of receivers without Adams.

After all, Rodgers is the back-to-back MVP of the league although his last Super Bowl appearance was when Green Bay beat Pittsburgh to bring their fourth championship to Titletown. The Packers enter Week 13 with a 4-8 record and four-and-a-half games behind the Vikings in the NFC North. Green Bay's season is over, and head coach has to decide whether to bench the four-time MVP Rodgers in favor of Jordan Love who they traded up to draft 26th in the 2020 NFL Draft. Check out our NFL Week 13 betting preview to find the best odds for the Packers this weekend.

Can Vikings And Dolphins Upset The Odds

Every season, one or two teams emerge from nowhere to go from pretenders to contenders. The Minnesota Vikings and the Miami Dolphins are two such teams who have put together very good seasons to earn their place in the Super Bowl conversation. You can get odds of 60/1 for both these teams to meet in Super Bowl LVII.

Throughout his career, Kirk Cousins has shown glimpses of how good a quarterback he can be. But doing it week after week has always been a stick to beat him with. But this season, Cousins has the Vikings playing consistently well. It helps that Cousins has Justin Jefferson, one of the best set of hands in the league, to throw to every week. Minnesota has lost just twice this season, once to the 10-1 Eagles and the 8-3 Cowboys. If Cousins can lead the Vikings to victory over the New York Jets this weekend, then their odds, which have come in from 40/1 in pre-season to 16/1 now, will shorten further. The Vikings have never won a Super Bowl. They have made it to the big dance four times, but have been on the losing side each time. Can Cousins change that narrative this season?

The Miami Dolphins face the 49ers in San Francisco on Sunday which will tell us a lot about whether the Dolphins are legitimate Super Bowl contenders. Miami quarterback Tua Tagovailoa has had to answer critics every day since the Dolphins drafted him fifth overall in the 2020 NFL Draft. In head coach Mike McDaniel, Tagovailoa has a man who believes in him. So much so, that Miami traded for Tyreek Hill from the Chiefs to give the quarterback another dangerous weapon to throw to.

Hill and second-year receiver Jaylen Waddle average a combined 13 catches and 199.6 receiving yards per game. Tagovailoa has yet to lose a game this season in which he has started and finished. Miami's three losses came when he left the 27-15 defeat to the Bengals and he sat out the next two games which the Dolphins lost to the Jets and Vikings. Miami's odds in August were 30/1, but now they are 12/1 to win their third championship and their first since their successful 1973 season. If you have any betting offers to use, maybe this is the bet to use it on. If you're looking for more information on how to bet on the NFL, read our betting guide.