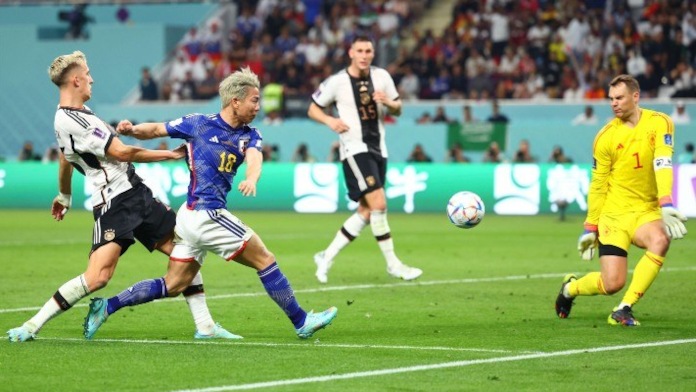 For 75 minutes, Germany looked set to begin their campaign with a win over Japan. World Cup betting sites had this down as a win for Germany, but Japan didn't read the script and produced the second shock result of this tournament.

Germany squandered the chance to begin their quest for a fifth World Cup by conceding two late goals to Japan. The tournament is only four days old, but it has already produced two massive shocks. A day after Saudi Arabia came from a goal down to beat Argentina, Japan did exactly the same thing to upset the odds on the leading soccer betting sites.

Germany got their campaign up and running with a first half penalty, but their spirited opponents, who were +650 to win the game, stunned Hansi Flick's side to win 2-1. Manchester City's Ilkay Gundogan gave the Germans a 1-0 lead at half-time thanks to his 33rd minute penalty after Japan's goalkeeper Shuichi Gonda brought down David Raum. But the game turned on its head after the interval.

With 15 minutes to play, Germany were holding on to a slender 1-0 lead when Japan produced another shock result of this World Cup.

Ritsu Doan, who plays for Freiburg in the German Bundesliga, levelled the scores 15 minutes from time, four minutes after he came off the bench. It was the fifth time in 10 matches at this World Cup in which both teams to score has been a winning bet. If Germany thought they were going to have to settle for a point, they were to be disappointed.

Takuma Asano, another second half substitute, left the Germans shell shocked with a stunning finish in the 83rd minute after dreadful defending by the four-time champions. Like Doan, Asano also plays in the German Bundesliga for Bochum, although a big money move could be on the cards for him if he can continue to shine in his side's forthcoming games.

The result, which was the fourth time in this tournament that over 2.5 total goals landed, puts Japan in control of Group E. As for Germany, they will hope to get their campaign back on track against Spain in their next game. Defeat for the Germans in that game could be eliminated before they face Costa Rica in their final group game. It's the second time in back-to-back World Cups, Germany have lost their opening game. Four years ago, Germany were beaten 1-0 by Mexico in Moscow.

Germany squandered a number of chances when leading 1-0 and were punished by a Japan side who took a leaf from Saudi Arabia and took the game to their more illustrious opponents. Japan have not gone further than the Round of 16, but if they can replicate this performance, then for the first time in their history, their odds to reach the quarter-finals on the leading soccer betting apps will shorten.

All is not lost for Germany. Argentina lost their opening goal of Italia '90 and recovered to reach the final. Being top of the World Cup outright market will not be a priority right now. Beating Spain is all that matters now.