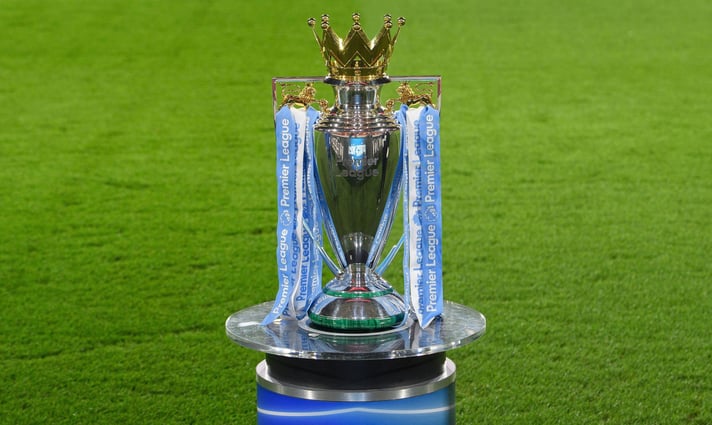 Seemingly every transfer window we hear supporters goading each other on social media about how much or how little their rivals have spent in the transfer market. The tired reply is that they need to focus on the "net spend" and they should look closer to home.

If we take last season as the barometer for net spend then what can we expect this season? Arsenal were the biggest spenders in the net spend rankings of the Premier League, but that didn’t equate to soccer betting sites paying out on title-winning bets, and financially for the club nor did it land top-four-winning wagers that would have meant Champions League qualification.

The Gunners’ net spend was £122.40 million, and they finished in fifth place. That equates to around £41 million for each spot in the league they earned compared to the previous season when they finished eighth in the table

Newcastle were second in the league with a £117.45 million total in purchases and zero transfer fees coming in. That spending earned them a one-spot jump up to 11th come the end of the campaign. Rounding out the top three, Manchester United had a transfer business bottom line of £98.37 million spent, and they dropped four places in the league.

On the other hand, champions Manchester City were mid-table in net spend with a balance of £36.63 million in the red, so perhaps you don’t have to spend the world to achieve success – though it probably helps when you have the squad depth of the blue side of Manchester built up over several years of transfer bravado! 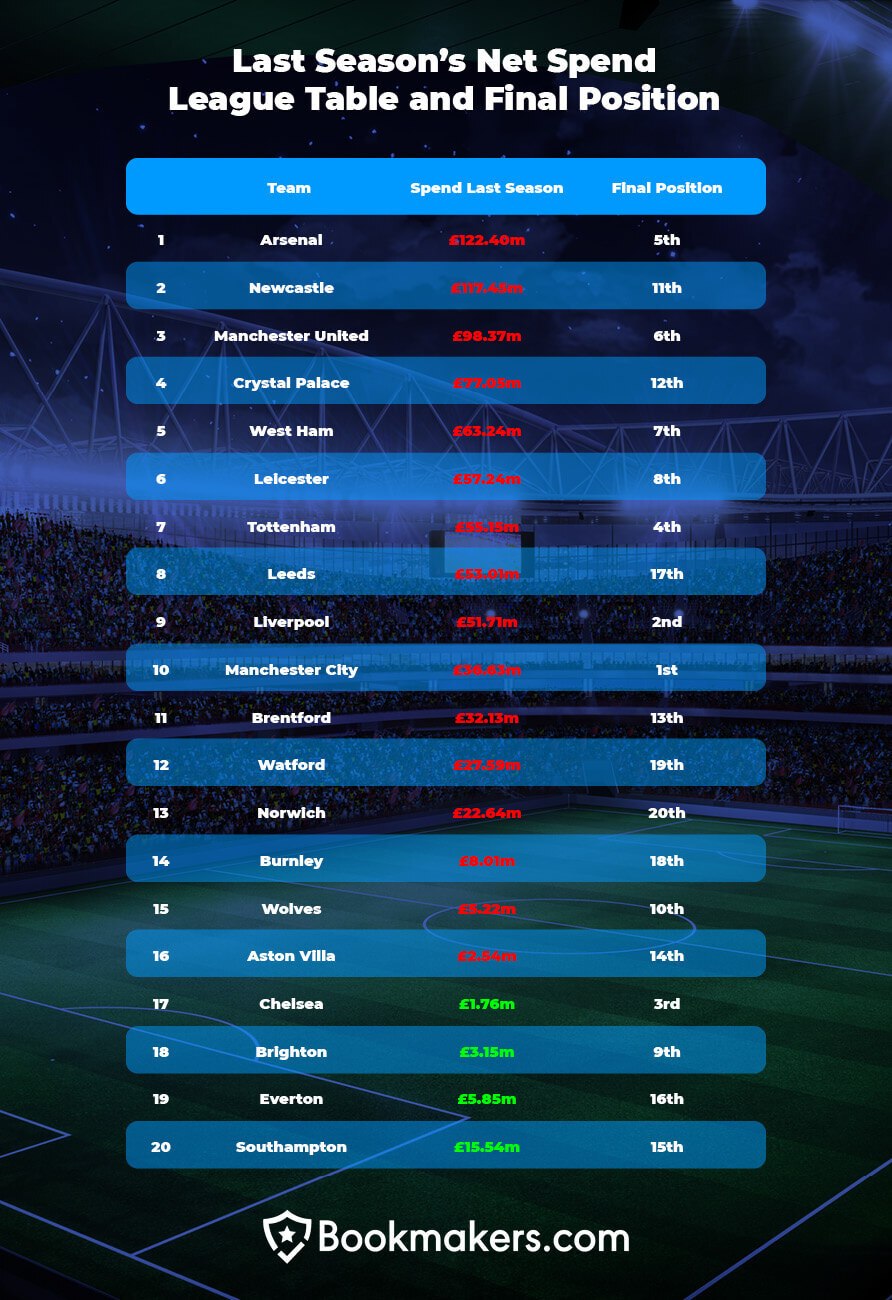 Who Are The Biggest Spenders In This Transfer Window?

If at first you don’t succeed, try, try again, or so the saying goes. It is a mantra that Arsenal appear to be following in order to get them back to their glory days of the early 2000s. They have a balance of £97.44 million spent on new players this transfer window, which is good enough for seventh in the net spend league table this season. Added to last year's shopping spree, the expectation for spending more than most two seasons in a row is surely high? Arsenal's odds at the best soccer betting apps of 11/1 to win the title would suggest that a place in the top four would be the best they can hope for, rather than a title challenge.

Chelsea, with their new owners in tow, have spent more than any team bar Manchester United this summer. Their net spend is second in the league at £201.77 million on shiny new players. Their best-price odds of 40/1 with some of the best soccer betting sites of winning the league maybe means that spending big doesn’t equate to success, especially given their start to the season, so long-term gains seem the aim.

Chelsea and Arsenal are split in the net spend rankings by newly transfer kitty rich Newcastle United (£122.40 million spent) and Tottenham (£118.04 million). Considering Tottenham haven’t won a major trophy since their EFL Cup success in 2008, it might be ambitious to think all this spending will amount to much immediately.

One of the teams also between Arsenal and Chelsea is perhaps one that people may not have expected given their absence from the top flight of English soccer of over 20 years. Newly promoted Nottingham Forest have set about their task of staying in the EPL by spending well over £100 million on over 20 new players and bringing in just £6.3 million in return. With odds of up to 2000/1 to win the league and as short as 1/1 to go straight back down to the Championship, perhaps the money could have been better spent elsewhere, or will it pay off and keep them at the top table for more than a season?

Leading the way in net spend rankings this window is the team clearly most desperate to get back to its previous glory days, Manchester United. It’s taken them most of the summer, but they made late headway in the transfer market to the tune of a £203.87 million net spend on new players for an already big squad that includes the likes of Cristiano Ronaldo, Harry Maguire and Jadon Sancho. However, the 2/1 odds of just reaching the top four, good enough for sixth favorite in that race, suggests the odds makers consider it may still be in vain for Erik ten Hag's new era. 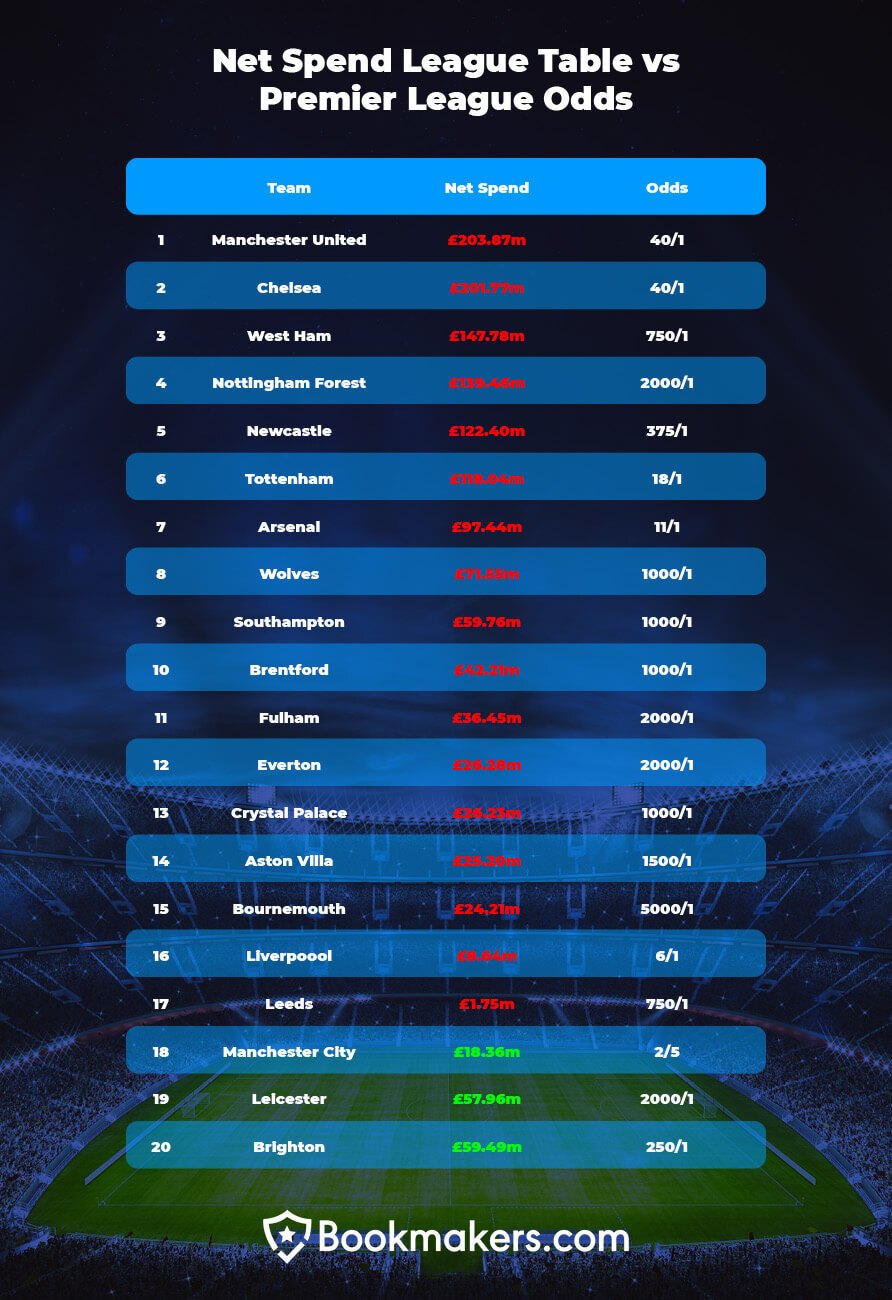 Who Would Win the Title Or Get Relegated Based On Net Spend?

As we all know, net spend has become the trump card for bantering and bickering fans when it comes to transfer business. With that in mind, how would the Premier League shake out if it all came down to how much money was actually spent in this transfer window?

We’ve already discussed that Man Utd would end the season on top of the pile, which isn’t beyond the realms of possibility, but at best priced 40/1, it is certainly considered unlikely. A top four including Chelsea, West Ham and Nottingham Forest might even make the most generous sports betting apps baulk at your request a bet! And what about relegation being secured by Man City, Leicester and Brighton just based on the transfer incomings and outgoings? It's surely preposterous.

Considering Manchester City alone are as big as 4500/1 to be relegated with some sports betting sites, we’re not sure you’d be given odds on the possibility. But Leicester at a best-priced 3/1 to be relegated could be something to explore in a separate bet, especially given their rocky start to the campaign in August coupled with a lack of business in the market.

Can We Tell Who Will Win the EPL Title by Net Spend?

Spending big might get fans excited about glory days ahead of the new season, but the reality is somewhat different. In the last 10 years, the team that has had the highest net spend on the season has only twice won the title - Man City both times. In fact, only one other time in the last 10 years has the title-winning team even ranked in the top two of a net spend table that same season.

The Arsenal fans cock-a-hoop last summer that their spending might lead to titles were left disappointed, but that is a common trend, according to Bookmakers.com research. In exactly half of the last 10 seasons, the team winning the title has been 10th or lower in net spend rankings. So, does that mean we should be looking at the teams that are relatively spendthrift to win the title. The fact that Man City and Liverpool are 19th and 16th in net spend, respectively, this summer would suggest that you should – empires are built over time, not in a frenzied four weeks of deals and excitement; sorry, everyone else! 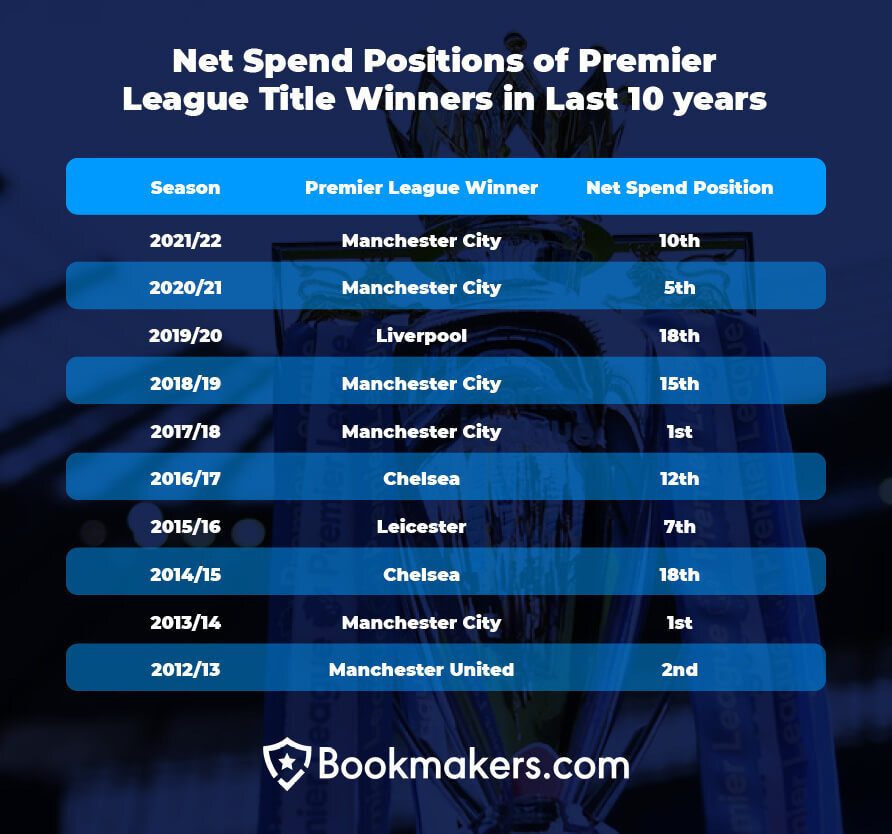 In short, yes. The top six ranked teams for net spend in the Premier League’s history are the traditional Big Six, as you might expect. Between those teams, there have been a total of 28 Premier League titles won.

They are known as the Big Six for a reason, although Tottenham are conspicuous by their absence on the list of EPL title winners despite spending more than any other team in Premier League history bar Man City, Man Utd, Chelsea, Arsenal and Liverpool.

All of the transfer figures in this article have been taken from Transfermarkt and official EPL club releases, while the odds have been found from a wide range of soccer betting sites.