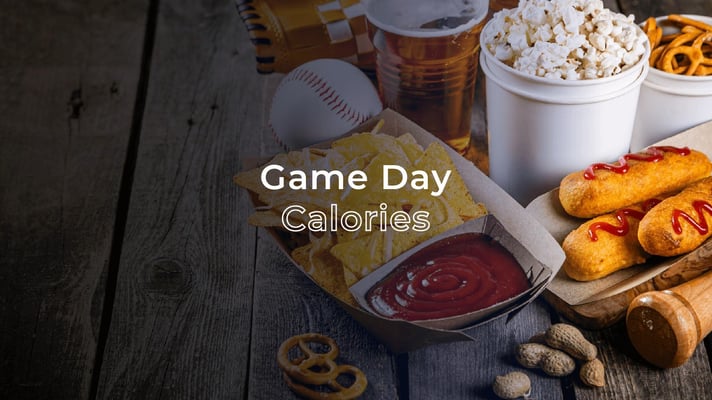 For many, sport is an immeasurably huge part of everyday life, with a shared interest in the same team often the foundation of friendships and the latest club, player, or fixture news forming the central focus of many conversations whether at work or the bar. But can the weekend’s results go as far as to impact your diet?

According to a 2013 study ‘From fan to fat’, a team’s performance has a huge impact on the overall game day calorie consumption of fans, with those on the losing side comfort-eating 10% more than the national average – and celebratory supporters consuming 5% fewer.

Taking this one step further, we’ve been able to determine the healthiest and unhealthiest teams to follow across the English Premier League, NFL, MLB, NBA, NHL, NCAAB, NCAAF, CFL, and AFL, according to the average calorie consumption of each team’s supporters over the last five years. 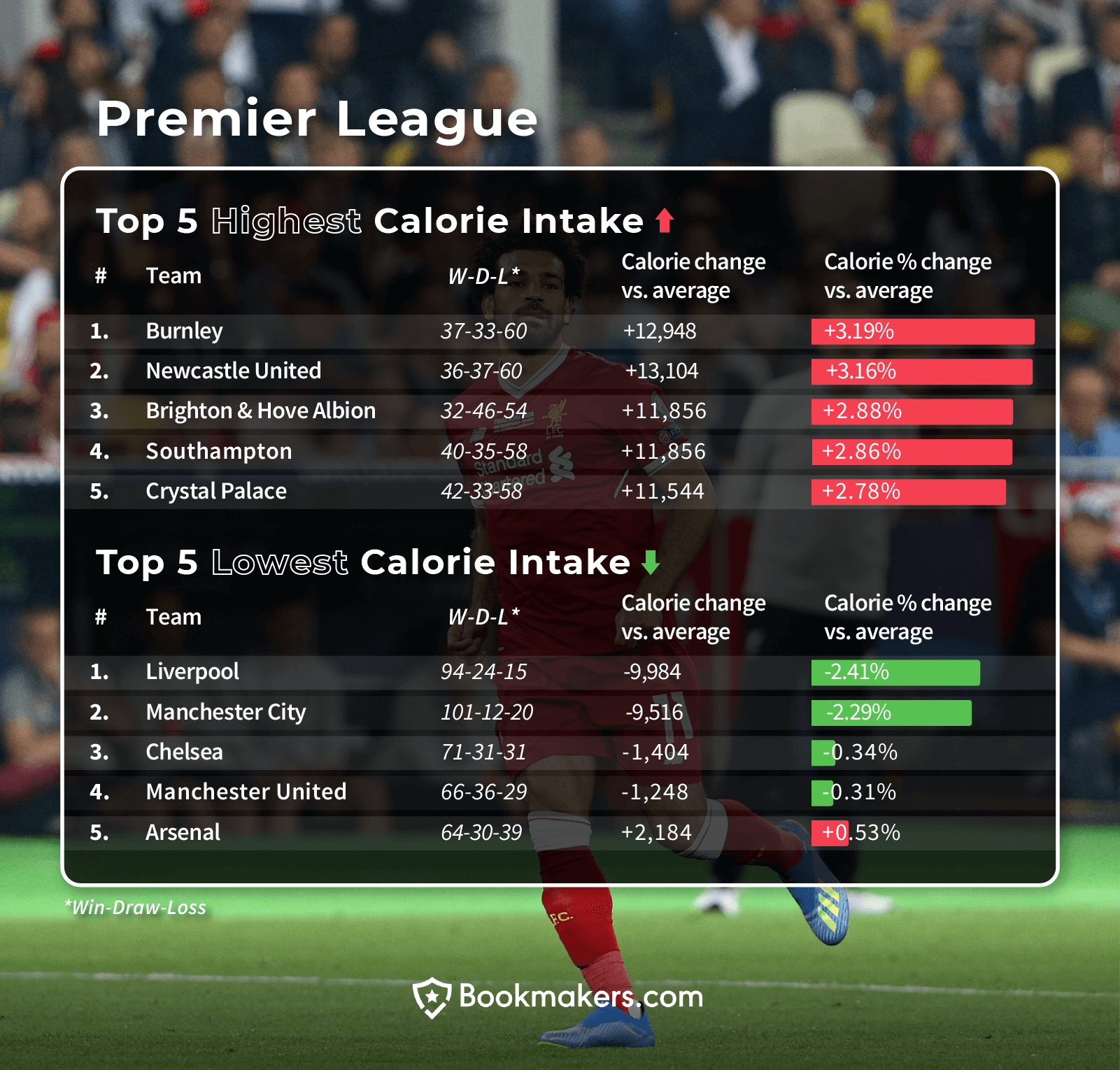 When it comes to comparing comfort eaters in the Premier League, there’s no looking past Burnley fans as the biggest over-indulgers. With the worst league record over the last five years, supporters have turned to food on match days to combat heartache and consumed 3.19% more calories than the average Brit.

Next up, despite the recent high-profile takeover which has positioned them as the richest club in world sport, Newcastle United’s league form over the last five seasons has seen them come dangerously close to relegation. As a result, fans have struggled to hold back on the over-eating, stress-consuming 3.16% more calories than usual.

On the flipside, the Premier League team that’s too busy tasting success for its fans to indulge in comfort snacks is Liverpool, with supporters consuming 2.41% less calories on a matchday than the average Brit.

Joining them at the top of the table, we have Manchester City, who are the only team to register 100+ wins over the last five years – a period that’s also seen them claim the Premier League title three times. As a result of the on-field dominance, City supporters eat 2.29% less calories than the UK average. 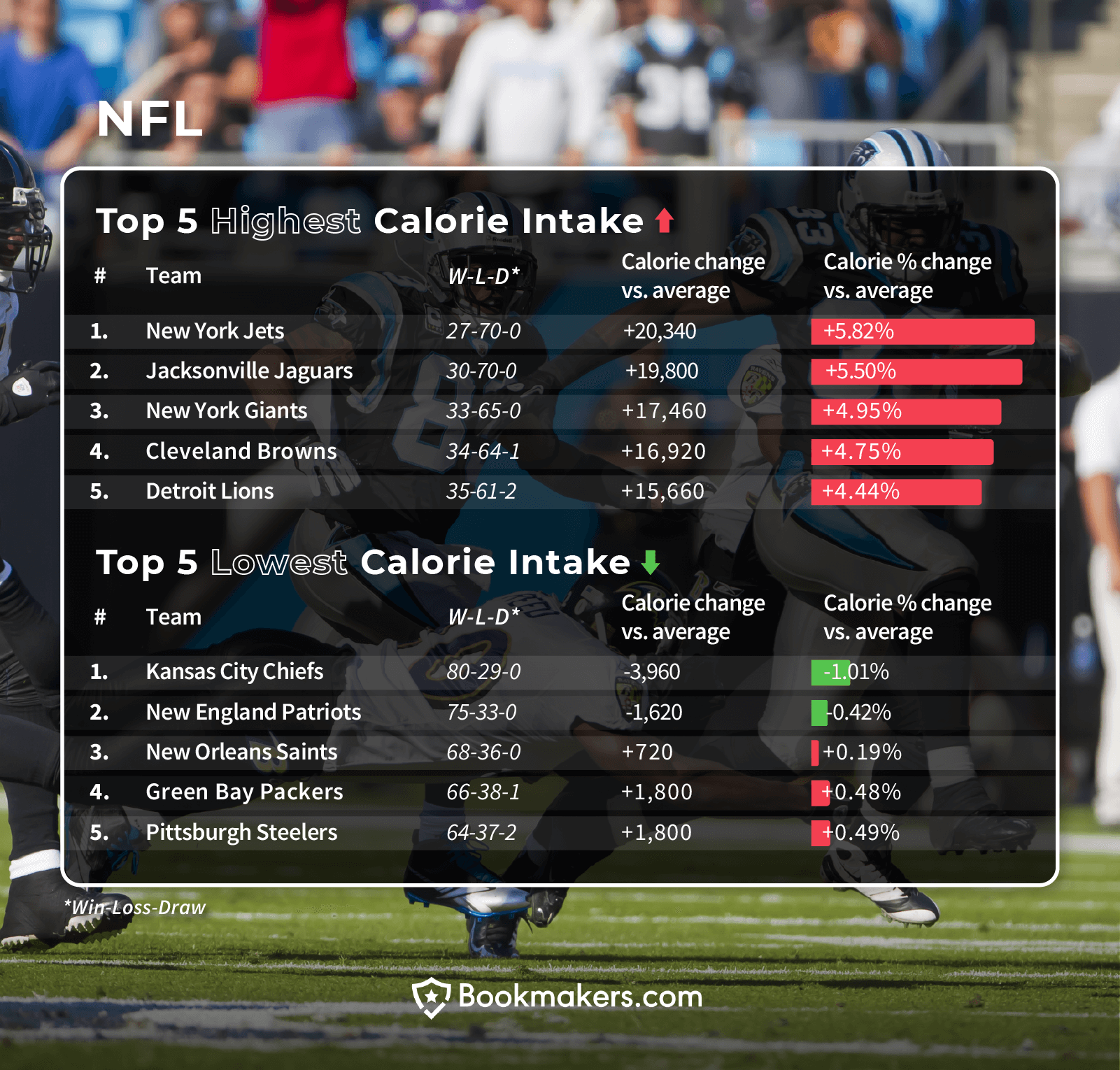 When it comes to the NFL, no team’s fans consume more calories on game day than those of the New York Jets – 5.82% more than the typical American, in fact, thanks to their terrible record over the last five seasons.

Recent league success, particularly over the last few seasons in reaching back-to-back Super Bowls after a 50-year absence, has seen fans of the Kansas City Chiefs enjoy the taste of victory more than most. And consuming 1.01% fewer calories than the average American, Chiefs supporters also enjoy the healthiest game days in the US!

Meanwhile, the New England Patriots might not have reached the Super Bowl since 2018, but their fans are still among the most used to winning football matches, and as such are the second healthiest in the NFL (-0.42%). Ranking third to fifth, respectively, we have the New Orleans Saints (+0.19%), Green Bay Packers (+0.48%), and Pittsburgh Steelers (+0.49%). 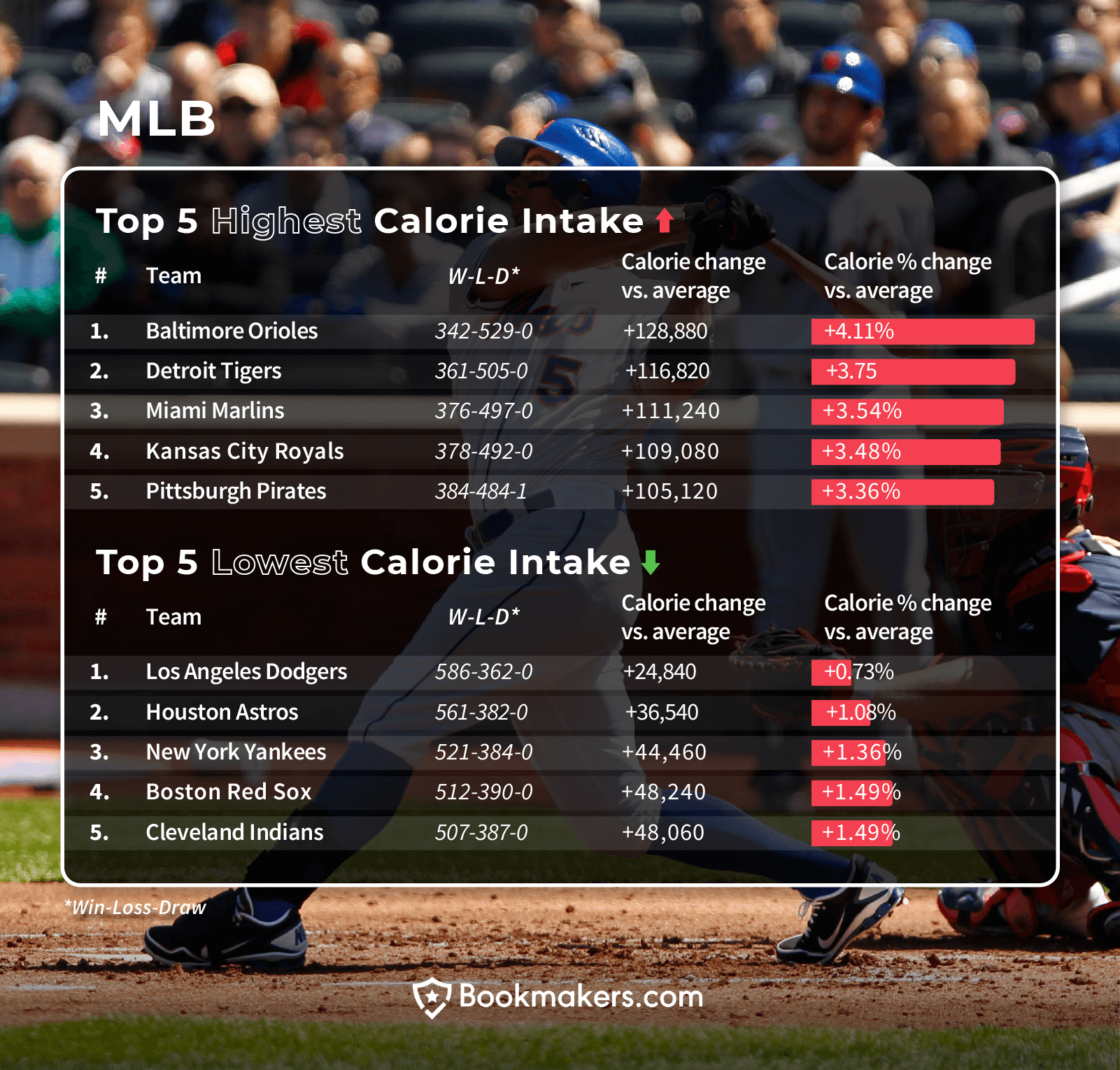 With the worst record in the entirety of MLB, fans of the Baltimore Orioles are revealed to be the biggest over-eaters, consuming more matchday calories than those of any other team and 4.11% more than the average American.

Following the Detroit Tigers is almost as bad for your health, though, with supporters also among the unhealthiest in the league (+3.75%). Completing the top five, the Orioles and Tigers are joined by the Miami Marlins (+3.54%), Kansas City Royals (+3.48%), and Pittsburgh Pirates (+3.36%).

At the other end of the table, Los Angeles Dodgers fans consume the fewest calories on game day (+0.73%), thanks to their strong record over the last five years, followed by those of the Houston Astros (+1.08%) and 27-time World Series winner the New York Yankees (+1.36%).

Meanwhile, Boston Red Sox supporters are also among the league’s healthiest, alongside fans of the Cleveland Indians – each fanbase consumers just 1.49% more calories than the average person on game day. 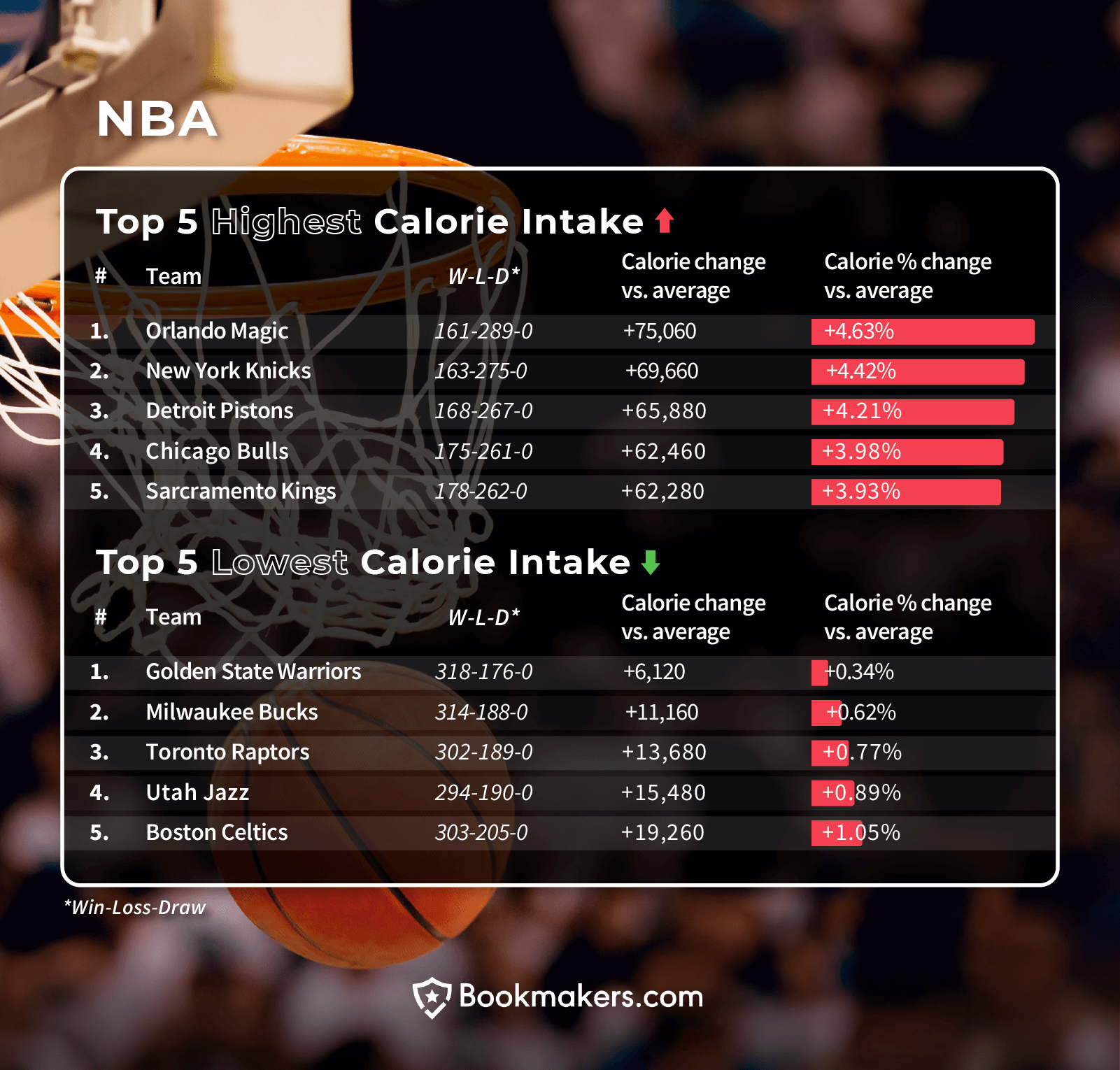 With the worst record of all NBA teams over the last five seasons, Orlando Magic fans have endured defeat more than any other set of supporters, causing them to consume 4.63% more calories than usual.

Fans of the New York Knicks aren’t much better off, however, and place a close second with a 4.42% calorie increase when watching their team. Next up, we have the Detroit Pistons (+4.21%), whose supporters are the third unhealthiest on game day, followed by the Chicago Bulls (+3.98%) and Sacramento Kings (+3.93%).

Winning back-to-back NBA Championships in 2017-2018, and placing second in 2019, fans of the Golden State Warriors are used to high-achievement, which has led to supporters consuming less calories on game day than any other fanbase – just 0.34% more than the typical American. 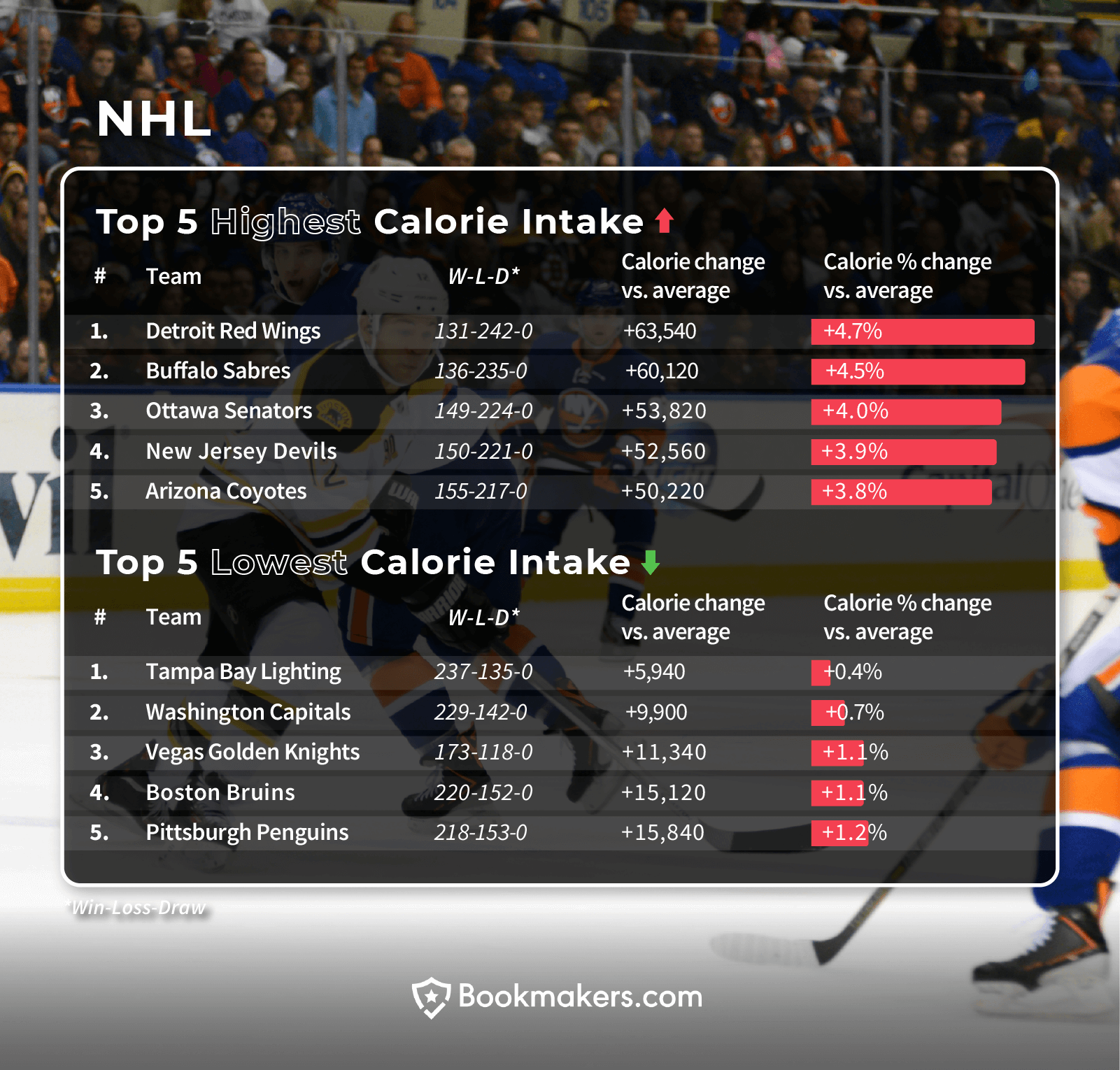 Recording more losses over the last five years than any other hockey team, the Detroit Red Wings is officially the unhealthiest NHL team to watch, with fans consuming 4.7% more comfort calories than normal to get through the constant disappointment.

With an increase of 4.5%, Buffalo Sabres supporters aren’t much better, though, while the Ottawa Senators (+4.0%), New Jersey Devils (+3.9%), and Arizona Coyotes (+3.8%) complete the top five toughest teams to follow.

Over the last five years, Tampa Bay Lightning supporters have enjoyed the taste of game day victory more times than any other NHL fanbase, ensuring they top the table as the healthiest team to follow with a calorie intake just 0.4% higher than the typical American.

Placing second, Washington Capitals fans eat 0.7% more on a matchday than usual, while those of the Vegas Golden Knights, Boston Bruins, and Pittsburgh Penguins consume 1.1%, 1.1%, and 1.2% more, respectively. 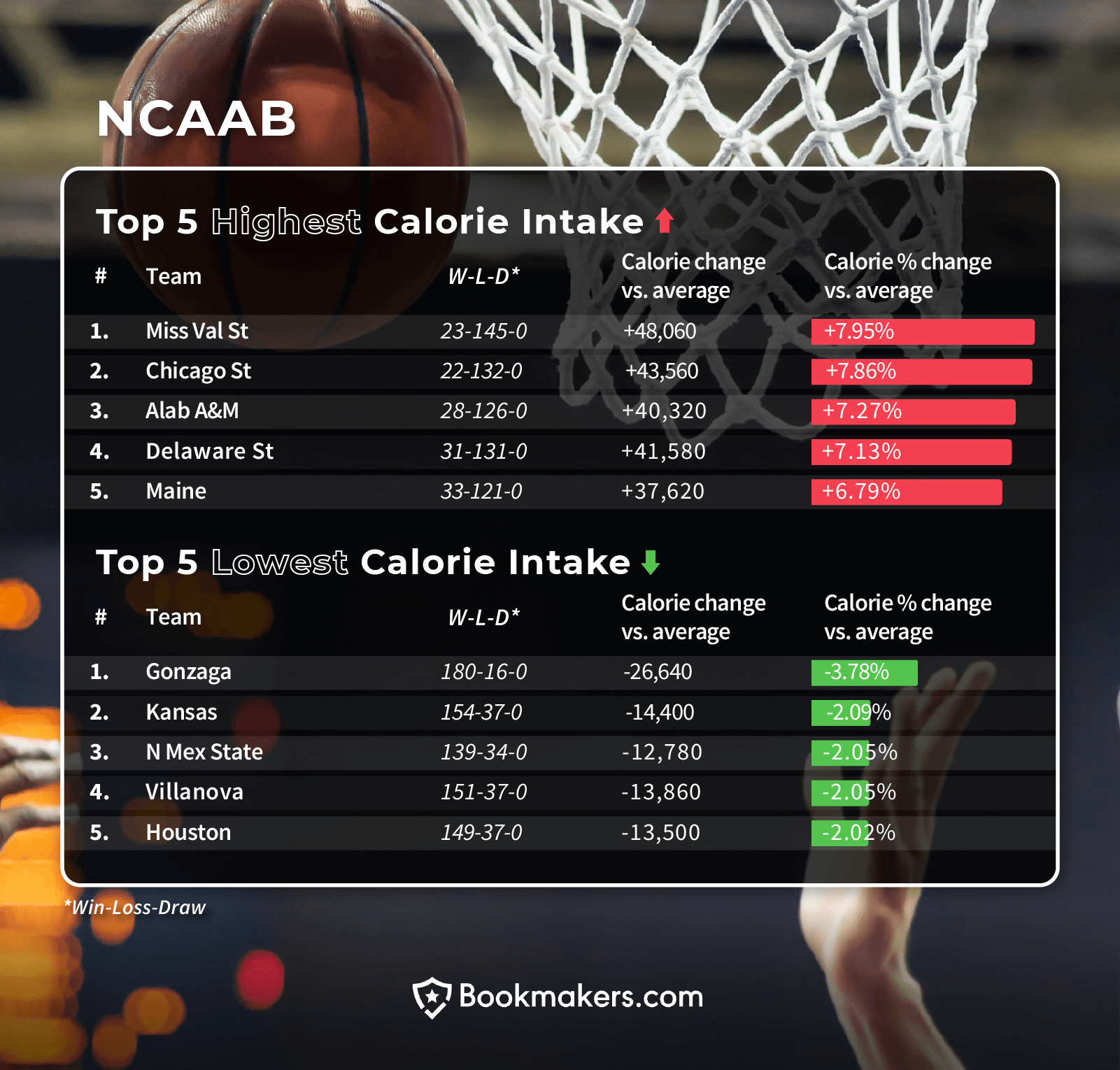 With 358 colleges competing in the NCAAB, it’s interesting to see the incredible extremes when it comes to supporter calorie consumption compared to other leagues. And with the most losses over the last five seasons of any NCAAB team, it’s fans of Mississippi Valley State Delta Devils who consume the most – 7.95% more than the national average. Incidentally, this is the highest increase of ANY fanbase across each of our nine recorded leagues.

At the other end of the spectrum, the Gonzaga Bulldogs have maintained fine form over the last five years, with fans needing little reason to turn to comfort food as consolation after a disappointing game day. This has led to supporters consuming less food than any other fanbase, and 3.78% fewer calories than the typical American. 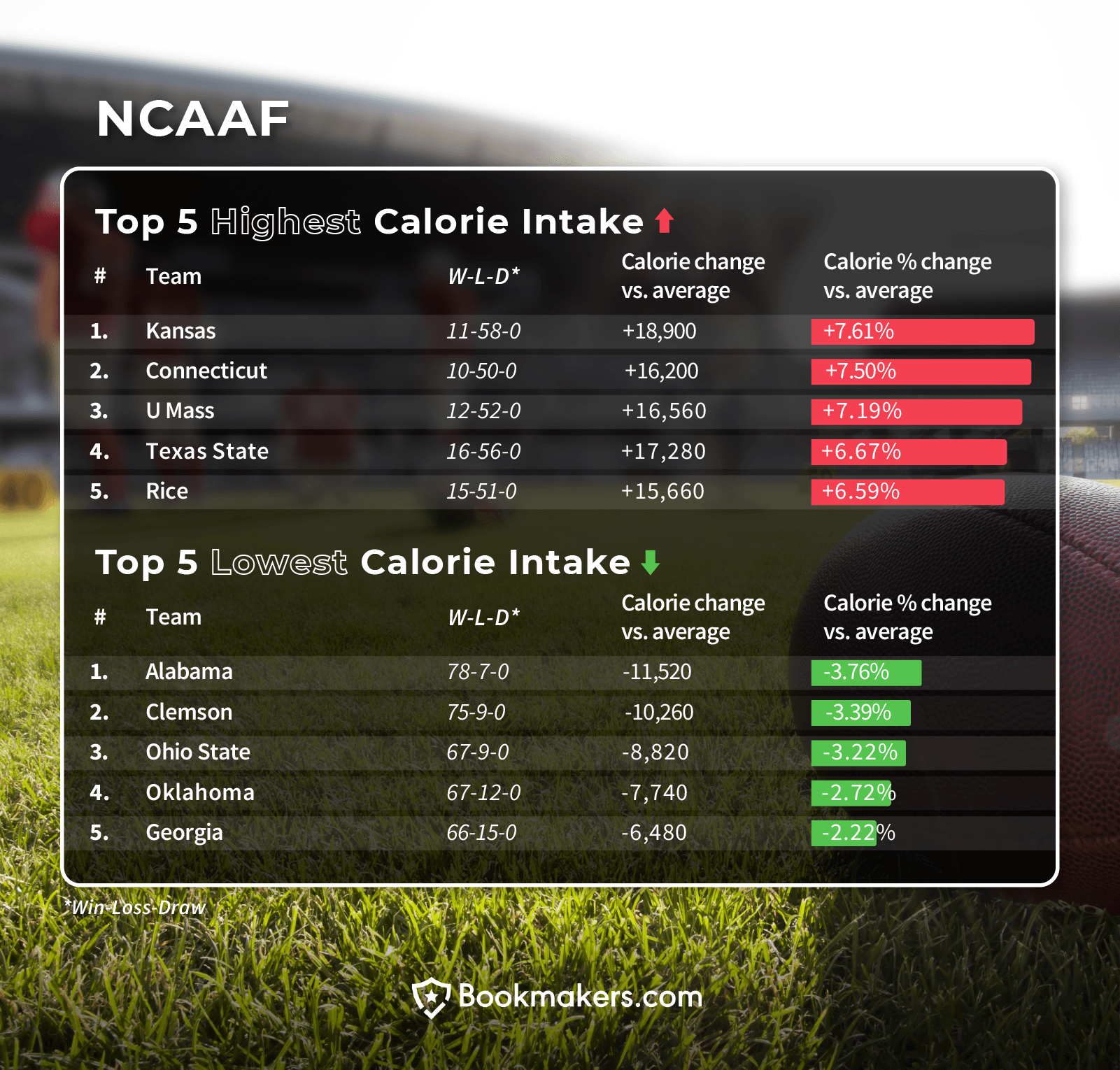 Similarly to NCAAB, following college football can see supporter calorie consumption hit serious highs, with fans of Kansas Jayhawks the unhealthiest across NCAAF. A poor record over the last five years has forced fans to turn to food to cope with the disappointment – 7.61% more than the average American, in fact.

In contrast, the best NCAAF team to support for your health is Alabama Crimson Tide, whose fans consume 3.76% fewer calories than the average American, followed closely by the Clemson Tigers (-3.39%) and Ohio State Buckeyes (-3.22%). Rounding out the top five, we also have the Oklahoma Sooners (-2.72%) and Georgia Bulldogs (-2.22%). 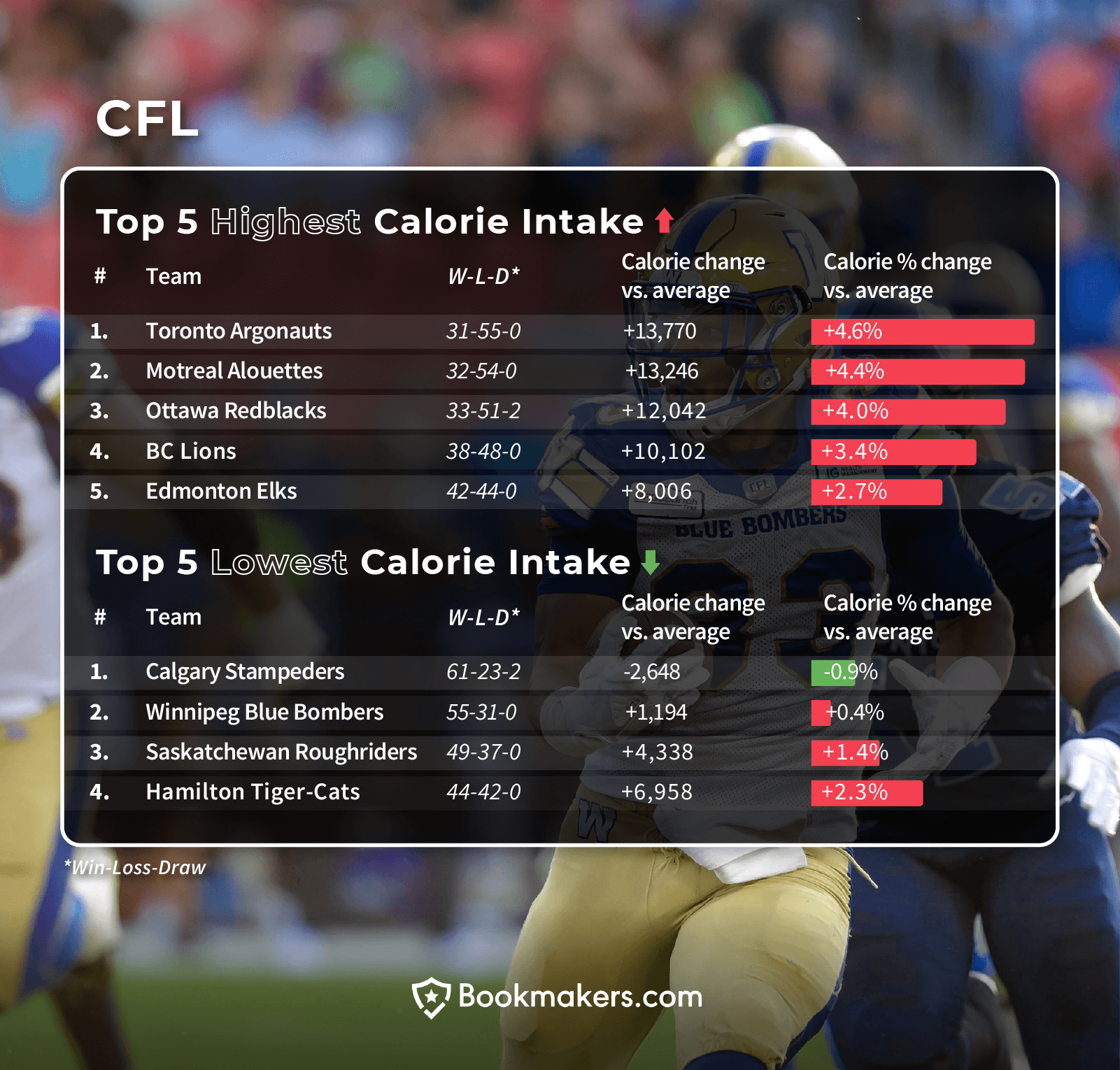 Analyzing CFL performances over the last five seasons, no team has lost more games of football than the Toronto Argonauts. Despite historic success and holding the record for most Grey Cup wins in history (17), Argonauts supporters have been starved of celebration in recent years, which has led them to consume more game day calories than any other fanbase (+4.6% more than usual).

At the other end of the table, meanwhile, the Calgary Stampeders (-0.9%) are revealed to be the easiest football team in Canada to watch, and the only CFL fanbase to eat less calories on game day than through the week. Ranking second, we have the Winnipeg Blue Bombers (+0.4%), followed by the Saskatchewan Roughriders (+1.4%) and Hamilton Tiger-Cats (+2.3%) who place third and fourth, respectively. 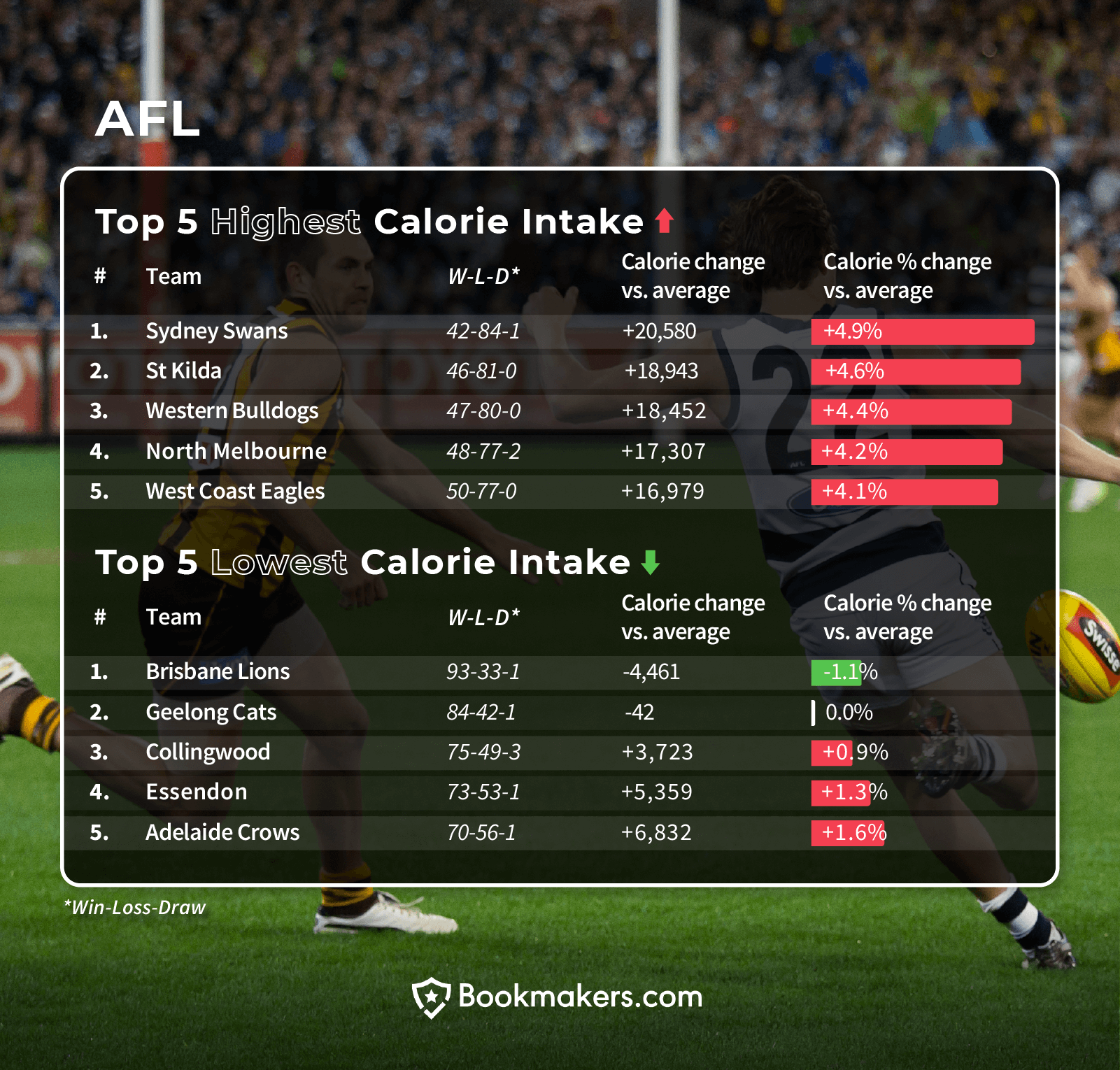 Of all the teams competing in the AFL, none have a worse record over the last five years than the Sydney Swans, forcing fans to comfort-consume more calories than any other set of supporters – and 4.9% more than the average Australian.

When it comes to supporter consumption, no AFL fanbase intakes fewer calories on game day than that of the Brisbane Lions. In fact, they’re the only team in the league whose followers eat less than the typical Australian (-1.1%). Meanwhile, Geelong Cats fans sit comfortably in line with the national average, ranking above those of Collingwood (+0.9%), Essendon (+1.3%), and Adelaide Crows (+1.6%).

It’s incredible to see just how big an impact following a team can have on your lifestyle, and how celebration or disappointment can influence the amount of food you eat in a day. For even more expert insight, check out the latest sporting news or discover the most popular betting offers from our trusted partners.

To determine which sporting fanbases consume the most match day calories, we utilized the findings from a 2013 academic paper: From Fan to Fat, Cornil and Chandon. The study concludes that after a loss, fans eat 10% more calories than usual. However, after a win, fans consume 5% fewer calories than usual. Based on these findings, win/loss records for the last five years were recorded for each team in the English Premier League, NFL, MLB, NBA, NHL, NCAAB, NCAAF, CFL, and AFL.