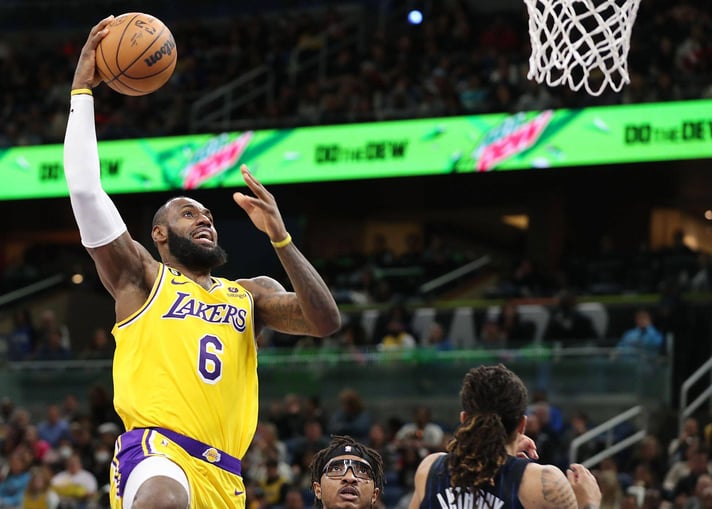 The NBA looked both to its history books and future this week. LeBron James stormed toward breaking the league’s all-time scoring record and is now under 180 points away. On the same day, selectors named his 18-year-old son to the All-American team. LeBron is stepping closer to history as Bronny looks set to follow the path of fellow All-Americans into the NBA, potentially alongside his dad.

Elsewhere, the New Orleans Pelicans look forward to the returns of Zion Williamson and Brandon Ingram, having lost five consecutive games and fallen away without the 2019 first-overall pick. Check out some of the stories you might have missed this week in professional basketball that might help you when wagering at NBA betting sites.

LeBron James hit another 46 points on his quest to break the NBA all-time scoring record and is now just 178 points behind Kareem Abdul-Jabbar. Scoring more than 40 against the Los Angeles Clippers itself was a record-breaking moment for the 38-year-old, as he became the first player in NBA history to score 40 points against all 30 NBA franchises.

Typical of the Lakers season, LeBron got the plaudits, but his team could not get the win. The 133-115 loss at the Crypto.com Arena put the Lakers four games below 0.500 and sitting in 13th place in the Western Conference. A trip to the playoffs looks unlikely. Some US betting apps offer +170 odds for them to make the playoffs this year. Even if they don’t, LeBron is proving that despite his age, he is a nightly NBA player props choice you should strongly consider.

Clippers star players Paul George and Kawhi Leonard paid tribute to James after the game. "I think the one thing that sticks out is just how long he's been doing it,” said Paul George. “To be 38 and score 46 tonight. That is super impressive.”

Leonard noted that Lebron was a “one-of-one talent,” adding, "you see it for yourself, the way he’s playing at this age.”

With the Pelicans dropping its fifth consecutive game last night, losing 99-98 to the Denver Nuggets, the organization was craving some good news to help revive a season that looked so promising early on. Instead, they received the news that missing star Zion Williamson is set for another two weeks on the sidelines.

New Orleans provided an update on the 2019 NBA draft’s first overall pick, indicating that while he is healing as expected, he won’t return for the end of the month as initially hoped. Pelicans coach Willie Green said, "The healing process is going accordingly, and we'll continue to progress from there."

Williamson has been the heart and soul of this team this season, with the Pelicans at one point leading the Western Conference. Williamson has averaged 26 points, 4.6 assists and 1.1 steals per game so far this season, while shooting 60.8 percent from the field. With the current schedule for his rehabilitation, he’ll miss eight games. New Orleans faces the Milwaukee Bucks, Denver Nuggets, Dallas Mavericks and Sacramento Kings in that stretch.

However, the Pelicans did get some good news from the medical department. All-Star forward Brandon Ingram, missing since November 25 with a foot injury, looks to be on the cusp of a return. Ingram’s return will give a timely boost to a team running short on momentum in Zion’s absence. He could be available to face the Minnesota Timberwolves for the Wednesday night matchup.

The Pelicans are valued at +1000 with some NBA betting apps to win the Western Conference. They will need to improve on their record of 2-8 in the last 10 games, along with Ingram and Williamson to return pronto to stand a chance.

The list featured the sons of several former NBA players, most notably LeBron James’ son Bronny. Bronny James, the 18-year-old guard, is a senior at Sierra Canyon High School in Los Angeles and is uncommitted ahead of graduating this year.

LeBron James has a history with the McDonald’s All-American game. He dominated the 2003 contest, scoring 27 points, seven rebounds and seven assists before his first overall selection in the NBA draft. Also featured in that game was Chris Paul, Bronny’s godfather.

Elsewhere, Trae Young, a member of the 2017 All-American team, congratulated Ja’Kobe Walter, a member of Trae Young’s Amateur Athletic Union (AAU) team who committed to Baylor for next season, on his selection. Young paid tribute to Walter for becoming the first “McDonald’s kid” from the team he founded.