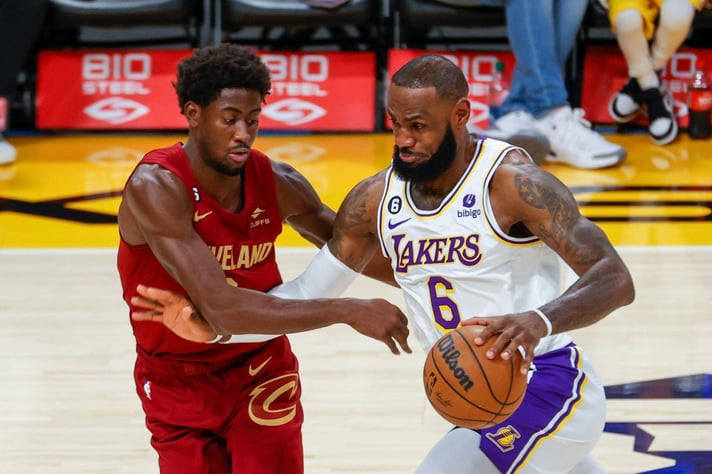 It has been another week of drama and excitement in the NBA for bettors and fans. There’ve been many intriguing stories around basketball this week as the league unveiled its new MVP trophy, named after Michael Jordan, and LeBron James made yet more history in an illustrious career.

Elsewhere, despite the recent compliments thrown at Zion Williamson, Ja Morant has been putting his stamp on the league as the Memphis Grizzlies extended its win streak to six games and shortened in the Western Conference odds market on betting sites. Here are some of the biggest stories in professional basketball that you might have missed.

On the back of unveiling the first trophy for the team with the best regular season record last week, the NBA unveiled a new trophy for its MVP on Tuesday. The NBA will now award the Michael Jordan Trophy to its best player, named after one of the game’s true greats.

Jordan worked with Nike to design the new trophy, which features a player breaking out of a rock at the base to reach for a crystal basketball. It’ll be produced by Artist Victor Solomon annually and is among six new trophies announced for NBA players.

Most expected that the league would rename the trophy as the award for the regular season champions. The Maurice Podoloff Trophy was the previous name for the MVP award. The trophy is steeped in symbolism. It is jagged at the bottom and smoothed at the top, representing the player’s journey from unrefined to star performer. It stands 23.6 inches tall and weighs 23.6 lb, representing Jordan’s iconic jersey number and the six NBA championships he won. The base is five-sided, a nod to his five league MVP titles, and tilted at a 15-degree angle, representing MJ’s 15-season career.

While LeBron James will be disappointed with the Los Angeles Lakers’ 122-118 overtime loss against the Boston Celtics, his 33-point haul for the matchup made history.

Climbing to two in the overall players scoring 30 points is the latest in a line of records for LeBron this season, despite the Lakers underperforming so far. He climbed to sixth in all-time career assists earlier this month, surpassing Magic Johnson, and continues to inch closer to Kareem Abdul-Jabbar in overall points scored. Abdul-Jabbar scored 1,560 in his 20-year career, with James at 1,386.

His record-breaking feat wasn’t enough to stop the Lakers from losing to their bitter rivals, despite a fightback from 20 points down in the third quarter. The Lakers squandered a 13-point lead with four minutes remaining to take the game to overtime, and the Celtics came away with the win. The Lakers are now up to +8000 to win the NBA Finals this year with some NBA betting apps.

Morant in the Paint Key to Grizzlies’ Surge

As a 6-foot-2 point guard, Ja Morant isn’t the first name you’d expect to be high on the list of best scorers in the paint this season. But he’s right up there with the leaders. His prowess from in the paint is no fluke, as last season, Morant became the first guard in 25 years to lead the league in PPG in the paint.

Morant has dazzled since arriving in the league, and he’s been instrumental in the Memphis Grizzlies’ rise to second in the Western Conference. After a rough start to the season, where Memphis suffered heavy losses to the Dallas Mavericks and Utah Jazz, the team has steadily climbed in the standings. The Grizzlies are currently on a six-game winning streak and are now fourth favorites for the Western Conference on betting apps.

The Grizzlies have benefitted from Morant’s upturn in form, whose explosive style is key to their offense. He has posted a triple-double and two double-doubles in his last four games. He has been exceptional alongside Steven Adams, whose defensive input has laid the platform for Morant to express himself.

Morant is a threat all over the court, averaging 27.5 PPG and leading the team in assists this year. The Grizzlies have looked good in their last two games where Morant has been missing. However, fans will want him to get back on the court as the franchise threatens the Western Conference.

While all the attention is on Zion Williamson and the New Orleans Pelicans at the top of the Western Conference, Memphis Head Coach Taylor Jenkins is quietly assembling a championship contender. The Grizzlies are +2100 with some USA sports betting sites to win the NBA Finals in 2023. Next up, the Memphis Grizzlies face the Milwaukee Bucks on Thursday at 22:00 ET, a big test of its championship credentials.