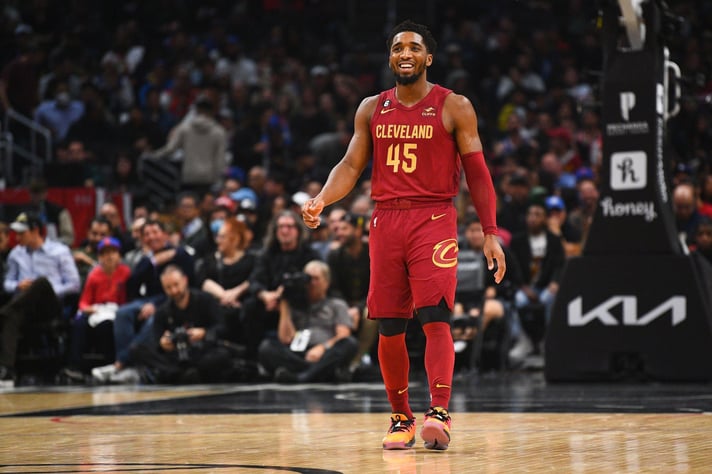 As 2022 rolls into 2023, things are getting interesting for NBA fans and bettors. Standing six months from the NBA Finals, the Boston Celtics still have the best record in the league and remain favorites with NBA betting sites. However, they face stiff competition from emerging teams in the Brooklyn Nets and the Memphis Grizzlies, as well as familiar foes, the Milwaukee Bucks and the Golden State Warriors. The second half of the season promises to be a treat!

This week, we’ve seen the eighth-best points total by a player in NBA history, the Nets extend their win streak to a dozen and one of the contenders for MVP ruled out for nearly a month with a hamstring injury. Read our weekly news wrap-up to see what you might have missed this week in professional basketball.

Donovan Mitchell made history this week in the NBA, scoring an incredible 71 points as the Cleveland Cavaliers overturned a 21-point deficit to beat the Chicago Bulls 145-134.

Mitchell’s haul was the highest single-game points total in 17 years since Kobe Bryant scored 81 for the LA Lakers against the Raptors in 2006. Mitchell became just the seventh player to score 70 or more but was well off the biggest points total in NBA history. That remains Wilt Chamberlain’s 100-point total against New York in 1962.

“We were treated tonight to one of the greatest performances in the history of the game,” said Cleveland coach JB Bickerstaff after the overtime win.

Mitchell was humble about the achievement: “I’m speechless. For me, not only did I do that, but I did it in an effort when we came back and won. It’s nuts.” He added, “I think I had a game like that once playing NBA2K, but I don’t think I shot that efficiently.”

Mitchell is just -125 with some USA sports betting sites to score over 30.5 points in Cleveland’s next game against the Phoenix Suns if you’re looking for any NBA prop bets. The Cavaliers are also +2000 with most betting apps to win the NBA Finals in June.

Things are good in Brooklyn at the moment. After beating the San Antonio Spurs on Monday night, the Brooklyn Nets extended their winning streak to 12 games. In December, Brooklyn had its most successful month in franchise history, and its current streak is the third-longest in team history.

The Nets have risen to second in the Eastern Conference standings with a 25-12 record, one game behind the Celtics. The Celtics and Nets will meet on January 13 in a game that is sure to be one of the most anticipated of the season with plenty of people looking at the lines at NBA betting apps long before the tip off.

The win against San Antonio saw Kyrie Irving score 27 points from 11-of-14 shooting from the field, with co-star Kevin Durant scoring 25 points from 10-of-14. Yuta Watanabe also chipped in with some crucial scores from the field. The Nets kept the Spurs at arm’s length all night as San Antonio didn’t get within 29 points of Brooklyn. It was a dominant offensive performance from the Nets, who scored 100 points by the end of the third quarter.

Once again, credit for the revival should fall at the feet of coach Jacque Vaughn. Brooklyn has won 23 out of 29 games since Vaughn became head coach. The ability to declutter the Nets’ strategy and get the best out of the star-studded roster has been pivotal to the turnaround in form. Well-documented struggles early in the season appear to be a memory.

Brooklyn will face several elite teams in the coming month and will be looking to test its playoff credentials. In January, the team will face the New Orleans Pelicans, Celtics, Warriors and Philadelphia 76ers. Brooklyn’s odds with most US betting apps to win the NBA Finals have shortened to as low as +550. Do the Nets have what it takes to go all the way?

New Orleans Pelicans forward Zion Williamson will miss up to three weeks with a hamstring strain, having pulled up in the Pelicans game with the 76ers on Monday night.

Williamson has been lighting up the NBA this season, averaging 26 points, seven rebounds, 4.6 assists and 1.1 steals. He’s shot 60.8% from the field, and 71.4% from the charity stripe this season, and betting sites had been shortening his odds of winning MVP in recent weeks. Now, most sportsbooks will offer +5000 for him to take home the Michael Jordan Trophy at the end of the season.

When the team arrived back in New Orleans after the Philadelphia game, the 22-year-old underwent an MRI, which revealed a right hamstring strain. He’ll be re-evaluated in three weeks, meaning he could miss up to 11 games, including matchups with the Nets, Celtics, Cavaliers and Denver Nuggets.

Williamson has been plagued by injuries in his NBA career, missing the whole 2021/22 season with a Jones fracture in his right foot. However, he looked to have put his injury issues behind him, playing 29 of 37 this year. In December, he entered the MVP conversation after averaging nearly 30 PPG and putting up a career-best 43 points against the Minnesota Timberwolves on December 28.

His return this year has prompted a Pelicans’ revival this season, with the team currently standing at 23-14, good for third in the Western Conference. That record is also just one game behind the first-place Nuggets. Hopefully, for Pelicans fans, they can keep up the high standards without the services of the 2019 first overall pick.