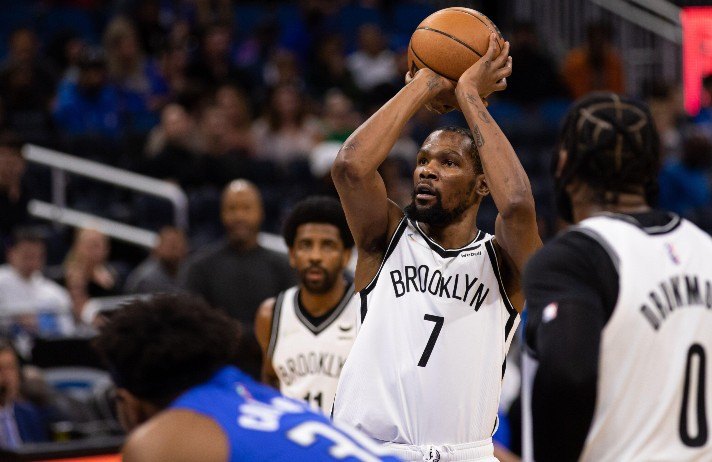 The NBA season is approaching the halfway mark and the league remains as exciting as ever. The Miami Heat broke the NBA free-throw record to beat the Oklahoma City Thunder in an eventful game on Tuesday night. Elsewhere, Jacque Vaughn faces his biggest test as Brooklyn Nets Head Coach as Kevin Durant faces an extended absence from the side.

Finally, with the standings beginning to crystalize after an unpredictable opening half of the season, some teams are looking to next year and the promise of generational talent in the draft. If you missed anything, we’ve rounded up the big stories in professional basketball this week. The Boston Celtics remain favorites with the leading NBA betting sites, but will that be the case after the latest slate of games?

The Brooklyn Nets have been a revelation since Jacque Vaughn took over the team in November. The team was 6-9 when Steve Nash departed on November 1, but they have gone on to win 21 of the 25 games under Vaughn’s leadership. While that record is impressive, Vaughn’s most challenging period as head coach awaits, with the news that Kevin Durant is set for a month on the sidelines with an MCL strain.

The coming month sees the Nets face the Boston Celtics twice, the Los Angeles Lakers, the Golden State Warriors, and the Philadelphia 76ers. It’s a crucial period for the team looking to leapfrog the Celtics into first place in the Eastern Conference. Most NBA betting apps are offering +450 for Brooklyn to clinch that first seed in the East at the end of the season.

Durant has been a big part of Brooklyn’s excellent record over the last 25 games. His shooting has led the team to the league-best offensive rating since November 17, primarily due to his ability to land shots from difficult positions. The team is last in free-throw attempts, second-last in offensive rebounds, and 24th in turnovers, but first in effective field goal percentage (eFG%), thanks to Durant’s shooting.

Durant has been able to pick shots that others in the league would miss, and the team has been rewarded with victories that looked impossible, like the last-minute win over the Toronto Raptors three weeks ago. In short, Durant is pivotal for this team to win games. Vaughn must prove his coaching ability to keep the Nets winning games with his star player absent.

"It's just a normal Tuesday night for the Miami Heat," coach Erik Spoelstra said. Spoelstra wasn’t being candid there. It wasn’t a normal night, it was a record-breaking one for Miami. As Jimmy Butler made the last free throw for the Heat against the Thunder on Tuesday night to win the game with 12.9 seconds left, he put his team in the NBA record books.

Miami Heat hit 40-for-40 free throws against OKC, breaking a record set by the Utah Jazz against the Portland Trail Blazers in December 1982, with the Jazz hitting 39-for-39. The free-throw record was just a small part of an eventful Tuesday night in Miami.

The Heat won the game 112-111 on the back of Butler’s play, without starters Tyler Herro, Bam Adebayo, Kyle Lowry, and Caleb Martin. Officials ejected backup center Dewayne Dedmon from the game for slapping a massage gun onto the court and arguing with a team member. That’s before we mention the breaking of a 40-year-old NBA record.

Miami is 22-20, sitting eighth in the Eastern Conference, and is 6-4 in its last 10 games. It sits first in the Southeast Division and can be backed at -185 with some US betting apps to win their division.

It isn’t a stretch for anyone to say that Victor Wembanyama will be first-overall in the 2023 NBA Draft. The 7-foot-4 forward with an 8-foot wingspan is dynamic, defensively sound, skilled, and mobile. Anyone watching Boulogne-Levallois Metropolitans 92 games will know that. The 18-year-old is the real deal.

The key to securing Wembanyama, estimated to add up to $500 million to the value of a franchise, will be the NBA Draft Lottery. The race has begun for teams to position themselves to secure the services of this generational talent. Teams have been maneuvering in 2022, and are set to continue right up to the trade deadline.

San Antonio Spurs (13-28) started early, trading its best player, All-Star Dejounte Murray, for three unprotected first-round picks and a pick swap in June. The Jazz (21-23) followed by trading Rudy Gobert and Donovan Mitchell for seven unprotected first-round selections and three pick swaps in July. While Utah did its work off the court to win the battle of Wembanyama, several teams with losing records could begin to pull the plug in order to put themselves in the best position possible.

The Spurs are joined by the Detroit Pistons (11-33), Orlando Magic (16-26), Houston Rockets (valued at just -122 to win under 22.5 games this season with US betting apps), and Charlotte Hornets at the bottom of the standings. The teams with the three worst records have an equal 14% chance of receiving the first overall pick, but there is no guarantee that having the worst record will bag you the best selection.

It’s a flawed system and may be in line for reform. NBA commissioner Adam Silver has recently said, “We put teams on notice. We’re going to be paying particular attention to the issue [of tanking] this year.”