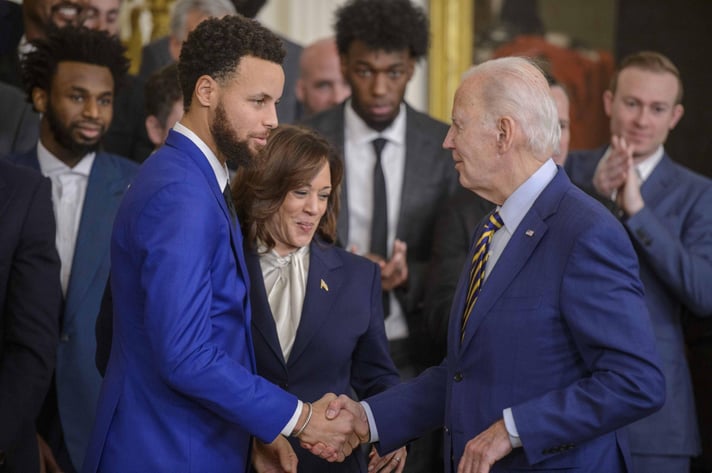 With the NBA passing the halfway mark of the season, fans and bettors can look forward to exciting matchups throughout the second half of the season as teams look to make the playoffs, tank for draft picks or sneak into the play-in. Teams are starting to show their hands, making them potentially viable candidates when wagering on the NBA Finals winners at NBA betting sites.

However, this week was also one for reflection for some teams, as the Golden State Warriors celebrated their 2022 achievements by visiting the White House for a Presidential Reception.

Elsewhere, players are looking at the record books, with Ben Simmons rising up the all-time NBA triple-double list thanks to an outstanding individual performance in the Brooklyn Nets’ loss to the San Antonio Spurs. Finally, while LeBron James looks to break Kareem Abdul-Jabbar’s all-time NBA scoring record, he got a reminder of his age in the victory over the Houston Rockets on Monday night. Check out the stories you might have missed this week.

He continued, saying that the Warriors reflected America with its style of play, noting the players’ “constant motion, with individual freedom and personality that comes together as one team, a team that plays with joy, with drive to be their best."

The Warriors beat the Boston Celtics in the six-game NBA Finals in 2022 and are +900 with some NBA betting apps to go back-to-back this season. Golden State sits in seventh place in the Western Conference with an improving 22-22 record.

The meeting was significant for Vice President Harris, an Oakland native who has supported the Warriors for many years. She said: "As a very proud daughter of Oakland, California, it gives me immense personal pride as the Vice President of the United States to say Dub Nation is in the house."

It’s been a difficult few weeks for the Brooklyn Nets, losing Kevin Durant to injury and dropping its last three games. Having been looking at snatching first place from the Celtics two weeks ago, the Nets now sit in fourth place in the Eastern Conference, five games behind the leaders.

On Tuesday evening, the Nets dropped their third successive game against the 14-31 San Antonio Spurs. With Kyrie Irving joining the injury list, the team was seriously short-handed. However, one Brooklyn player made history among all the doom and gloom: three-time All-Star Ben Simmons.

The 2016 first overall pick has averaged 7.5 points, 6.3 assists, 6.8 rebounds and 1.5 assists per game this season and is shooting an impressive 57.3% from the field. At a time when the Nets are looking for someone to drag them out of their recent slump, Simmons is going to be crucial.

Some USA sports betting sites still consider Brooklyn the second-best team in the Eastern Conference, with most US betting apps pricing them at +310 to win the East. Previously, they were tied with the Milwaukee Bucks as second favorites to take home the Bob Cousy Trophy.

It would be apt if the player who overtook Bob Cousy in all-time triple-doubles in the NBA won a trophy named after him in the same season, don’t you think?

Jabari Smith Jr. to LeBron: “You Played Against My Dad!”

It’s never nice to feel old, but in his 20th year in the NBA, LeBron James had that feeling on Monday night when the Los Angeles Lakers faced off against the Houston Rockets. During the game, the 38-year-old forward was approached by his Houston counterpart, Jabari Smith Jr., and Smith had a fun fact that gave LBJ a sense of his longevity in the NBA.

“You played against my dad in your first NBA game ever. You feel old, don’t you?” Smith said to LeBron during a timeout.

“Why did you do that to me?” James responded.

Smith’s father, Jabari Smith Sr., was a member of the Sacramento Kings lineup on October 30 2003, when James played his first-ever NBA game. The 2003 NBA draft first overall pick was a member of the Cleveland Cavaliers at the time and scored 25 points – setting an NBA record for the most points scored by a high schooler in his debut. He has since gone to break many more records in a Hall of Fame career.

Smith Sr. attended the game to watch his son play and chatted with James afterward. LeBron led Los Angeles to a 140-132 win over Houston, scoring a season-high 48 points. Smith Jr., the third overall pick in the 2022 NBA draft, scored 14 points for the Rockets and has averaged 12.1 points and seven rebounds a game. He’s +21000 with some betting sites to win Rookie of the Year, so there may be some better NBA picks available.

After scoring 48 points, LeBron James needs only 316 points to overtake Kareen Abdul-Jabbar’s 38,387 overall points and break the all-time NBA scoring record. His current PPG of 29.7 means that, at the current rate, he’ll break the record in 12 games.