NBA Weekend Preview: All Eyes On LeBron vs Giannis 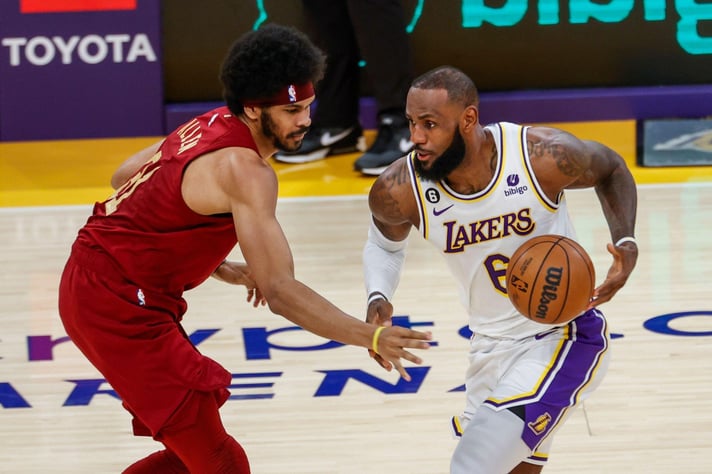 There’s a contrasting clash of styles on Friday night as the Denver Nuggets travel to face the Atlanta Hawks, two Pacific Division rivals meet on Saturday as the Los Angeles Clippers and Sacramento Kings go head-to-head. To close the weekend out, Giannis and LeBron face off on Sunday with the Los Angeles Lakers looking to find some form after a disappointing start to the season.

Check out our NBA picks for potentially classic matchups for NBA fans and bettors this weekend.

One of the most exciting matchups of the weekend sees the Denver Nuggets travel to State Farm Arena on Friday at 7:30pm ET to face Atlanta Hawks. The game features the mouth-watering prospect of back-to-back MVP Nikola Jokic facing off against the dynamic duo of Trae Young and Dejounte Murray.

The Nuggets have been excellent away from home this season and lead the league in road wins, with eight victories. Jokic is running the show for Denver and leads the team in points, assists, and rebounds. A return for Michael Porter Jr. had seen the Nuggets rely on Jokic less for buckets, but Porter Jr. is missing on Friday with a foot injury.

Atlanta recovered from three straight losses with an easy win against the Orlando Magic on Wednesday night, with Trae Young leading the offense with 30 points and 14 assists. Dejounte Murray also added 27 points to help snap the losing streak.

The Nuggets’ spectacular form, winning 12 of their 17 games, sees them as favorites with most USA betting sites, but the matchup will be a fascinating clash of styles. Denver and Jokic will try to slow the game down, whereas Young and Atlanta will try to open the game up and play with flair. We think a bucket or so will decide the outcome.

The Sacramento Kings travel to Crpyto.com Arena this Saturday at 4pm ET for a clash with divisional rivals the LA Clippers as the league’s best defense meets the second-best offense. The Kings were flying high just a few weeks ago with seven consecutive wins taking them 0.5 games behind the Phoenix Suns for first place in the Western Conference. However, three straight losses brought them down to earth with a thud.

However, the Kings’ free-scoring offense got back to its best when Tyrese Haliburton and the Indiana Pacers came to town, with the Kings winning 137-114 to break the losing streak. Sacramento will travel to their divisional rivals full of confidence after that win, despite losing the first matchup between the two teams by a bucket in late October.

The LA Clippers are starting to find consistency after a rough patch to start the season, but need to win more games to threaten the Eastern Conference pacesetters, like the Boston Celtics and the Milwaukee Bucks. Getting Paul George, Kawhi Leonard, and Luke Kennard on the court consistently is pivotal for the Clippers to have a shot at winning their first NBA Finals. Some NBA betting sites think they have a chance, offering odds of +1000 for the Clippers to win their first ever championship in 2023.

The Clippers can start moving in the right direction by overcoming the Kings, a team that looks good on offense but is shaky defensively, despite the presence of Mike Brown. Brown was the mastermind behind the Warriors’ championship-winning defense from 2016 until last year but has only helped the Kings put up the 26th-ranked defense in the NBA.

Contrastingly, Sacramento will want to continue its upward trajectory by beating an LA Clippers team who can stop shots but score less frequently than the Kings. This is a genuinely fascinating divisional matchup.

The Bucks, awaiting the return of Khris Middleton, look to diversify an offense to turbocharge its quest for a third NBA championship. On the other hand, the Lakers have struggled to find the right combination and consistency this season, despite possessing some of basketball’s greatest players.

The 17-point collapse to the Pacers on Monday exemplified great individuals that still need to gel into a team. Let’s not forget that three of their seven wins this season have come against the San Antonio Spurs, who haven’t won a game since November 12.

While Anthony Davis has been posting impressive numbers for his team, he only touched the ball four times in the last three minutes of the loss against Indiana. LeBron has been getting back to form, posting a season-high 39 against the Spurs on Saturday night. Overall, something needs to be fixed in LA.

The Bucks continue to win games thanks to the pure basketball ability of Giannis Antetokounmpo. He’s averaged 31.3 PPG this season, 11.5 rebounds, and 5.5 assists and is key to how the Bucks’ offense functions. He leads the league in usage percentage, PPG in the paint, and fast break PPG. In short, he’s everywhere.

The only issue for Milwaukee is that its offense can’t rely on Giannis in every game and through every play, and it needs some of its offensive talents to start firing to take the pressure off. Khris Middleton’s imminent return should help with this.

For the matchup, Milwaukee are +8.5 favorites on the point spread on NBA betting apps, but despite all logic, you can never rule out LeBron and co.