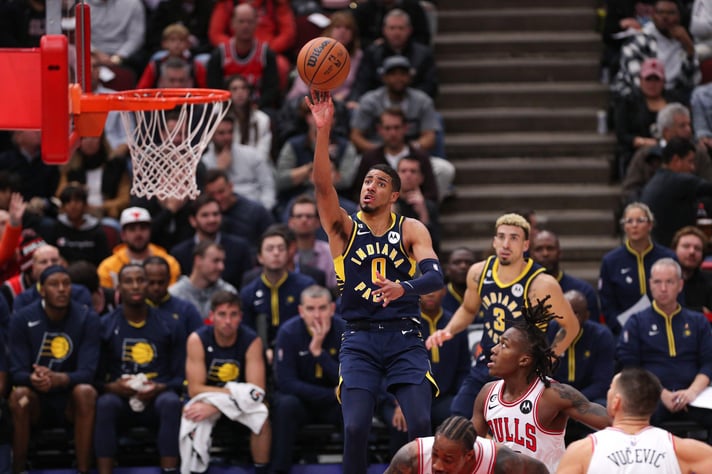 Having reached the halfway mark of the NBA season, this weekend promises to be fascinating for basketball fans and people visiting NBA betting sites. Here at Bookmakers.com, we can’t wait!

On Friday night, there’s a battle between two teams currently occupying the play-in tournament positions, with both looking to charge up the standings. Later on Friday, one of the NBA’s best offenses meets one of the best defenses as the Denver Nuggets look to continue their win streak against the LA Clippers.

Finally, on Sunday, there’s round two of a mini-series between the short-handed Milwaukee Bucks and Miami Heat rosters. Below are our NBA picks for the weekend’s best games.

With the NBA season at the halfway mark, the Atlanta Hawks and the Indiana Pacers need to start getting hot if they want to avoid the play-in come playoff time. A matchup between the teams on Friday night at Gainbridge Fieldhouse comes at the perfect time.

Both teams come into the game off a loss on Wednesday. The Pacers lost against the New York Knicks 119-113, while the Hawks were beaten at home by the Bucks 114-105. The Pacers won the first matchup between the teams this season, 129-114 in December and have a 7-3 record in their last 10 games. Meanwhile, the Hawks have lost six of their previous eight games to fall 11 games back from the conference-leading Boston Celtics.

Unsurprisingly, Trae Young has provided most of the offensive spark when Atlanta has looked like a good team this season. He’s averaged 27.5 PPG and 42.2% shooting from the field this season. However, the 24-year-old has blown hot and cold and had a public disagreement with Hawks head coach, Nate McMillan, late last year, which may have affected his play.

Indiana has a more balanced offense, with multiple team members sharing the scoring load. This hasn’t stopped their effectiveness, as the scoring offense is ranked 10th in the league, with 115.6 points per game. Tyrese Haliburton leads the team’s PPG with 20.2. The Pacers have five players who average double figures in PPG this year (Bennedict Mathurin with 17.2, Buddy Hield with 18.3, Myles Turner with 17, and Jalen Smith with 10). This balance in their offense makes it challenging to stop them defensively.

Atlanta is a three-point favorite going into the game with some NBA betting apps, with operators believing that the star quality of Trae Young will outmatch the offensive balance of Indiana. It’ll be interesting to see if this is the case.

Western Conference rivals Denver Nuggets and Los Angeles Clippers meet for the third time this season. Denver is looking to score a fifth straight victory over LA and is riding a four-game win streak that began with a 31-point victory over the Clippers eight days ago.

Denver has surged to tied-first place in the Western Conference on the back of 14 wins in 17 games. It has the best offense in the NBA, with a 117.4 offensive rating, shooting 40.0% three-point range and 65.4 assist percentage.

Much of this offensive drive has been thanks to reigning MVP Nikola Jokic, who has once again been a popular NBA prop bets pick. The 27-year-old is averaging 24.9 points, 11 rebounds and 9.7 assists per game – not far off averaging a triple-double. Some USA sports betting sites are offering as low as +260 for him to win the NBA MVP.

The Clippers enter the game in sixth place in the Western Conference and second to the Sacramento Kings in the Pacific Division. Following their 113-101 home victory against the Dallas Mavericks during the week, they nudged their record over 0.500 and are now 22-21, 1.5 games behind the Kings in a competitive division.

After defeating the Milwaukee Bucks in the first game of a two-game mini-series, the Miami Heat will look to sweep the 2021 NBA Champions when the two teams meet for Round 2 Saturday afternoon on Miami’s home court.

Down five players, the Bucks were always likely to struggle in game one and looked exhausted as the game wore on. While neither side was scintillating on offense, Miami continued to chip away at Milwaukee. The Bucks had a nine-point lead at the end of the first quarter, were tied at 45 at the half, trailed by five at the end of the third and eventually lost by six.

Without Khris Middleton and Giannis Antetokounmpo from the NBA lineup, Milwaukee’s game plan was based entirely on shooting from beyond the arc. The Bucks made 57 attempts from, but Milwaukee’s well-documented reliance on Giannis for scoring in the paint meant they simply had no other offensive weapons. It is a credit to the team’s spirit that they scored 102 points.

Miami was equally short-handed. The Heat was without Kyle Lowry, Tyler Herro and Caleb Martin for the matchup. Less reliant on its starters, Miami was able to settle into the game, and Gabe Vincent stepped up in the absence of Lowry and co, scoring a career-high 28 points. Jimmy Butler and Bam Adebayo each chipped in with double-doubles.

The Heat also continued their excellent free-throw shooting streak, hitting 14 in a row (54 consecutive free throws) before Butler missed one toward the end of the game. With both sides likely in similar shape going into the Saturday matchup, it’ll be interesting to see how the Bucks cope without Giannis again. Will they continue to play three-ball? Or will they try to shoot more from the rim? The lines at US betting apps will be tight for the second matchup.