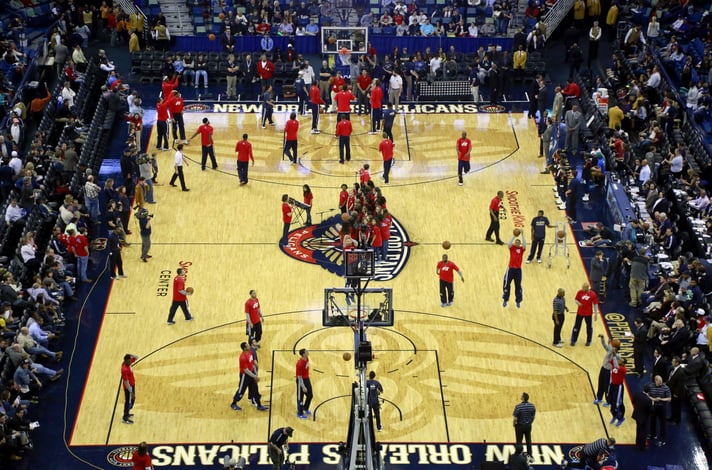 We’ve got some good news if you’re looking to place any wagers on NBA betting sites this weekend, as another scintillating few days of NBA action awaits!

On Friday night, we’ve got a meeting in Louisiana between a team recovering from the loss of an impressive win streak and a team recovering from losing its best player. Later that night in Denver, two playoff-caliber sides face off as the Cleveland Cavaliers meet a Denver Nuggets team looking to hold on to first place in the Western Conference.

Finally, the Sacramento Kings look to continue their trajectory toward their first place in the postseason in 16 years but face stiff competition from a Los Angeles Lakers team that have won three straight. Here are our NBA picks of this weekend’s best games.

The Brooklyn Nets travel to Louisiana for a Friday night matchup looking to recover after their streak-beating loss against the Chicago Bulls with a win against the New Orleans Pelicans. It’s the second matchup between the teams this season, with the Pelicans winning the first meeting 130-108.

Brooklyn has been revived under Jacque Vaughn since he took over as head coach but struggled against Chicago on the defensive end of the court. The Bulls shot 53.1% from the field, and the Nets didn’t look like the swashbuckling team of recent weeks in the midweek loss.

The Pelicans enter the game on the back of a morale-boosting win against the Houston Rockets but are still missing Zion Williamson. Williamson has been the heart of the team’s offense this season but missed the win against the Rockets and is set to be out a further three weeks with a hamstring injury.

It was a big boost for New Orleans to win midweek, but Zion’s absence leaves them as potential underdogs at NBA betting apps in the next few games. The team faces matchups against the Boston Celtics, Cleveland and Denver after Brooklyn. Winning against the Nets will show that the Pelicans can compete without its star man. The Pelicans are four-point underdogs on the spread with some USA sports betting sites, as operators think the Nets have the advantage with Zion missing the game.

On the back of three successive wins to start 2023, the Cleveland Cavaliers face a matchup with the Denver Nuggets on Friday at Ball Arena. This is set to be a huge test of both teams’ playoff credentials. The Cavaliers improved their record to 25-14 with a win against the Phoenix Suns during the week and are just two games behind first-place Boston Celtics in the Eastern Conference standings.

Denver is tied atop the Western Conference after an 8-2 run in the last 10 games and has only lost three home games all season, tied for best in the NBA this season. However, the Memphis Grizzlies have the same record as the Nuggets, while the Pelicans are a game back and the resurgent Dallas Mavericks are just 3.5 games back. Denver is +1300 to win the NBA Finals this year with some US betting apps. The Nuggets have benefited from reigning MVP Nikola Jokic entering midseason form, with 30 points in just 32 minutes in their imposing win against the Celtics on New Year’s Day.

With the Memphis Grizzlies facing the nosediving Utah Jazz in seemingly a simpler matchup on Sunday, Denver needs a win to keep its position as the top dog.

While Donovan Mitchell’s offensive production wasn’t quite as prolific in the win against the Suns as it was in his 71-point game against the Bulls on January 3, Mitchell and the Cavaliers have been quietly notching up wins in the NBA. Cleveland is 7-3 in its last 10 games and just two games back of Celtics in first place. The team needs a win to keep up the pressure on the top teams in the East.

You might have heard that the Sacramento Kings haven’t made the playoffs in a while. You might have also heard that they stand a good chance of breaking that unwanted 16-year streak this season. Well, if the Kings are going to make the postseason and crucially avoid the play-in, they need to keep winning with four teams in the conference just one game back of them. The Lakers visit the Golden 1 Center on Saturday night having won three straight.

Sitting fifth in the Western Conference, Sacramento is not in the conversation like Dallas, Memphis, New Orleans and Denver for first place. Still, it stands a better chance of making the playoffs if it wins the Pacific Division for the first time since 2002, and the team is currently priced with most betting sites at +550.

While winning your division has no bearing on the playoffs, it would be a huge morale boost to Kings fans who have patiently supported a losing franchise for many years. The Kings won their last matchup with the Lakers just before Christmas. Lighting the beam to signify a second win would be massive for this team.

However, Los Angeles poses a significant threat to Sacramento, having lost once since Christmas Day. Injuries remain an issue for the Lakers as Anthony Davis is still on the sidelines, and Lonnie Walker IV and Austin Reaves could also miss the game. But this team is improving and looking to sneak into the playoffs - possibly at the Kings’ expense. If the Kings are going to make the postseason, they need to see off this threat.