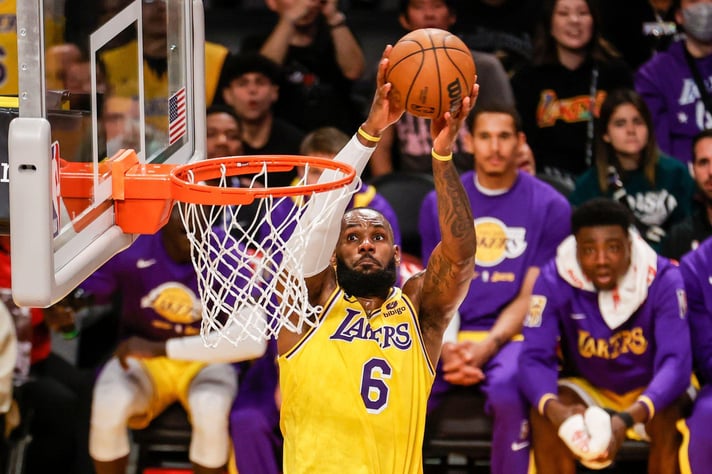 What a weekend in the NBA that was! Like any basketball and NBA betting fans, we were looking forward to the LeBron James vs. Giannis Antetokounmpo battle. It did not disappoint, with the underdog Los Angeles Lakers beating the Milwaukee Bucks in a classic matchup.

There was drama and intrigue everywhere as both conference leaders suffered upset home losses. The Miami Heat overcame the Boston Celtics, which was just a second home loss for the Celtics this season. Meanwhile, the Houston Rockets stunned the Phoenix Suns.

Elsewhere, the Sacramento Kings stretched their winning streak to three by beating divisional rivals, the Los Angeles Clippers. The San Antonio Spurs extended their losing streak to 11 with two heavy losses, and the Atlanta Hawks beat the Denver Nuggets in an entertaining matchup. We’ve provided a roundup of the weekend’s on-court action in case you missed anything.

Pregame, this was billed as a showdown between James and Antetokounmpo, and Friday night’s matchup did not disappoint. A Lakers team that has struggled this season managed to beat the Bucks 133-129 at the Fiserv Forum.

LeBron James made history by passing Magic Johnson on the NBA’s career assist list. However, it is Anthony Davis who will haunt the nightmares of the Bucks defense for some time. He scored a season-high 44 points to deliver his best game of the year, which was crucial to a Lakers side looking to change the narrative of a stuttering season.

While this was a disappointing result for Milwaukee, the team welcomed Khris Middleton back to the starting lineup after his injury troubles. He played 27 minutes and shot 17 points. His connection with Giannis for a classy assist in the first quarter was a reminder of what the Bucks have missed while he’s been off-court.

The Bucks pushed the Lakers all the way and had two opportunities to tie the game in the final 20 seconds. Grayson Allen and Jrue Holiday failed to connect with three-point shots with 20 and five seconds remaining. Despite that, the usually solid Bucks defense was the difference between winning and losing this matchup. Mike Budenholzer wasn’t happy postgame, saying, “to give up four 30-point quarters and 133 points total [is] not gonna be good enough.”

In the end, nothing is won or lost in December in the NBA. However, this was a statement victory from the Lakers, who backed it up by beating the Washington Wizards on Sunday. Has this team of superstars finally turned a corner?

Despite a clutch three-pointer from Jaylen Brown for the Boston Celtics to take the game to overtime, the Miami Heat completed an upset 120-116 overtime victory over the leaders of the Eastern Conference on Friday night.

The Heat welcomed leading scorer Jimmy Butler back to the lineup after he missed the previous seven games with a knee injury. He helped Miami to force Boston’s second home loss of the season with 25 points in 36 minutes, while Bam Adebayo scored 28 and Tyler Herro scored 26. The win was a team performance, and Butler paid tribute to the whole group. “My team welcomed me back and let me do what I do. It was a big ‘W’ for the team.” said Butler.

An off-night for Boston star Jayson Tatum helped Miami. Tatum scored just 14 points and went five for 18 from the field. He went 0 for 7 from threes, down from 49 points in the first game of the series with Miami, a 134-121 victory at TD Garden on Wednesday.

Miami put Boston on the back foot after a 19-6 spree in the fourth quarter. This gave the Heat a five-point lead with just four minutes left. Heroics from Brown put the game into overtime, with the teams tying twice again in OT. However, Butler sealed the win for the Heat with a bucket on the back of Tatum missing his seventh three-point attempt of the night.

The Celtics recovered from the loss to beat the Brooklyn Nets on Sunday night and are still heavy favorites to win the Eastern Conference. Some USA sports betting sites are offering odds as low as +175 for the team to post the best record in the conference.

Jalen Green scored 30 points in a stunning 122-121 road victory for Houston Rockets against the Phoenix Suns on Friday night. Houston had the worst record in the Western Conference coming into the game (6-16), while Phoenix had the best (15-7). The loss was Phoenix’s second home defeat of the season, and the Suns went into the game on the back of a six-game winning streak.

Green, the second pick in the 2021 Draft, said, “that’s what I want to be known as in the league; a two-way player who is also a scorer.” Green went some way toward achieving that, scoring the winning bucket and making three crucial rebounds during the game.

The Rockets overcame a 16-point deficit in the second half, with Green scoring 20 third-quarter points to kick-start the comeback. Phoenix’s starters gave everything to win the game, with Devin Booker continuing his hot streak with 41 points. Meanwhile, Mikal Bridges and Cameron Payne scored 22 and 20, respectively. Houston’s win wasn’t about Phoenix underperforming but a magnificent performance from a young Houston offense still finding its feet and developing.

Those betting on NBA betting apps won’t be put off this Phoenix team after the loss, as the franchise bounced back with a 38-point win over the San Antonio Spurs on Sunday. Phoenix are at +900 with some betting sites to win their first-ever NBA Championship in 2023.