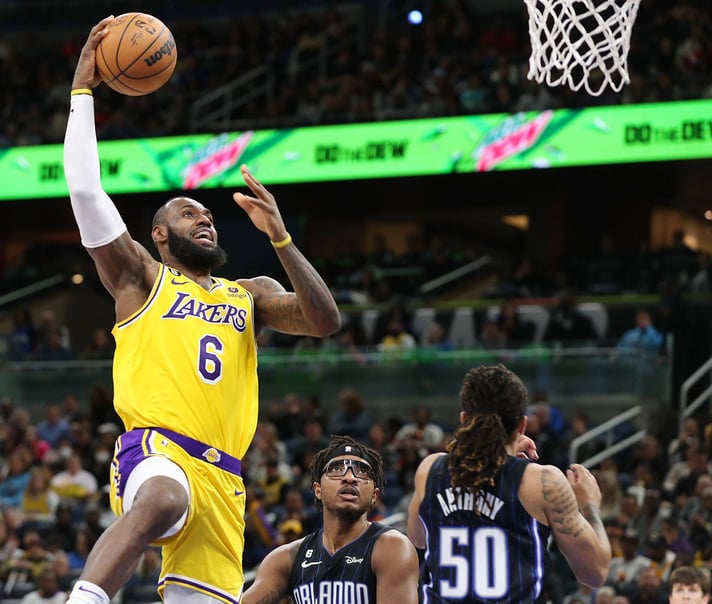 Records tumbled across the NBA this weekend, and here at Bookmakers.com, we loved watching the action. Nearly 70,000 spectators graced the historic Alamodome to celebrate the San Antonio Spurs’ 50th anniversary. However, the celebrations didn’t extend to the court, as the Spurs were swatted away by a dominant Golden State Warriors team.

LeBron James became the youngest player to break the 38,000-point mark as he continues to inch closer to the NBA scoring record, despite the Los Angeles Lakers’ third straight loss on Sunday night. Elsewhere, a short-handed Brooklyn Nets side lost its second straight game without Kevin Durant. Check out our favorite games from the weekend below that could help you when making NBA picks on NBA betting sites this week.

It’s been a tough year for San Antonio Spurs fans, who saw their team fall to a 13-29 record before their date with the NBA Champions, Golden State Warriors, on Friday night.

That’s why, before we talk about the performance on the court, we’d like to congratulate the Spurs on breaking the NBA regular-season attendance record at the Alamodome on Friday night. A crowd of 68,323 watched the game and celebrated the storied franchise’s 50th birthday.

On the court, it’s not looking good for the Spurs. They were out-shot, out-rebounded and ultimately out-classed by the Warriors. The game ended in an ugly 144-113 loss for the Spurs. After going 6-4 in their last 10 games, Golden State is now valued at +900 with some NBA betting apps to win this season’s NBA Finals.

Golden State was just better than its opponent all night. It hit 10 more three-point shots, 20 more points in the paint and eight more fastbreak points than the Spurs. For a young, rebuilding Spurs team, this was an education. Tre Jones led the Spurs in scoring, hitting 21 points, while Jordan Poole had 25 for the Dubs. Eight players hit double figures for the Warriors.

While the Philadelphia 76ers won the game, LeBron James made history Sunday night, becoming the youngest player to surpass the 38,000-point mark and the second to reach the milestone overall. For those counting at home, he’s just 364 points away from Kareem Abdul-Jabbar’s all-time scoring record in the NBA. He'll claim the milestone in February at his rate of scoring, where he’s averaging 29.2 PPG.

It’s good that LeBron’s hit the milestone and a monstrous 35 points in the game, because otherwise it would have been a miserable night for Los Angeles, with their record falling to 19-24. The 38-year-old is continuing to be a great NBA prop bets option on a nightly basis even given his age and the team’s struggles.

After hopes rose significantly in the aftermath of their win against the Sacramento Kings, the Lakers have dropped three successive games and lie 13th in the West. The idea of reaching the play-ins is slowly diminishing and not many people will be backing them to do just that at USA sports betting sites. It almost raises the question – where would the Lakers be without LeBron James?

Philadelphia didn’t need to be at their best to win at the Crypto.com Arena, but a stellar performance from James Harden in his hometown secured the win. He had 24 points, 13 assists and seven rebounds. Scoring like this continues a trend for The Beard, who always brings his best in Southern California. Harden has averaged 28.2 points, 9.6 assists, and 7.8 rebounds in his past nine games in LA.

In successive one-point victories, Harden has been the difference. In the 118-117 win against the Utah Jazz, the 76ers scored the winning bucket with a Harden pass to Joel Embiid. Against the Lakers, it was the same play to the letter. When Philadelphia needs him, Harden steps up. His combination with Embiid, who is now +1300 to be named MVP with some US betting apps, is crucial for the 76ers.

Losing Kevin Durant was a big deal for the Brooklyn Nets, and it has shown since his absence. The Nets are now 0-2 without KD after losing tamely to the Boston Celtics on Thursday before another drab performance against a young Oklahoma City Thunder side on Sunday evening.

OKC was coming off the back of four victories in five matchups, full of confidence, and looking to notch a signature win in the Empire State. For Brooklyn, the loss of Ben Simmons compounded the loss of KD before tip-off. He’ll travel to San Antonio for Tuesday’s matchup but is a doubt.

Then came a fourth quarter where the Nets, regularly hitting over 40% from beyond three-point range this season, could only manage 2-for-13 from deep. The Thunder caught up, outscored the Nets 37-22 in the fourth and took home the 10-point victory.

The Nets were looking to challenge the Celtics for first place in the Eastern Conference at the beginning of last week. However, now the franchise is looking over its shoulder at the Milwaukee Bucks and 76ers, who are just half a game behind in third place. Brooklyn’s odds to win the NBA Finals have drifted with some betting apps to +800 as it goes four games behind Boston in the standings.