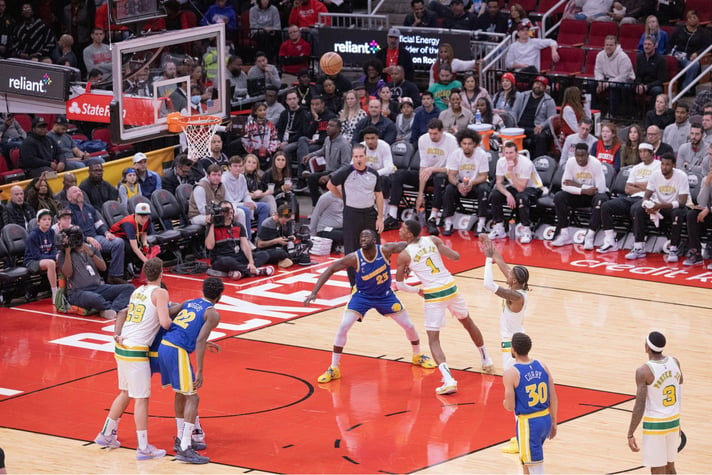 Water-cooler chats in the Bookmakers.com office are off to a slow start this Monday. Like the rest of the basketball fans around the world, we are recovering from a red-hot weekend full of NBA fire.

So, what did we have this weekend? Three games that went into overtime, a streak-breaking road win for the Golden State Warriors and a shocking loss for Giannis Antetokounmpo’s Milwaukee Bucks.

Elsewhere, the Boston Celtics won their ninth straight game, Utah Jazz and Orlando Magic had clutch wins and the LA Clippers won back-to-back. Yeah, it was an action-packed weekend from coast to coast. So, in case you missed anything, we’ve picked out the highlights from this weekend’s on-court action for you to help you when looking for future bets on NBA betting sites.

On Friday Night, Philadephia 76ers pulled off an upset win over the high-flying Milwaukee Bucks at the Wells Fargo Center. Joel Embiid scored 32 points and had 11 rebounds and eight assists. His mid-range shooting was pivotal to the 76ers returning to Philly with the win.

Giannis Antetokounmpo struggled in the matchup against Cleveland Cavaliers but was back in good shape, scoring 25, to go with 14 rebounds and four assists against Philadelphia. During the week, Bucks coach Mike Budenholzer said it took time for his star to rediscover himself after an absence. But we feel it was worth the wait. While he was approaching his best on Friday, his free throws have not been up to scratch in his last two outings. He connected on just 4-of-15 from the free-throw line. His free-throw percentage is the lowest of his career this season at 58.7.

None of this can take away from an impressive victory for the 76ers. Although it was followed up by a loss against the Minnesota Timberwolves the following night, they’ll take plenty of confidence from recent games, winning four of their last six. An exciting matchup against the Brooklyn Nets awaits, and with the team in good shape, visitors of NBA betting apps might be tempted to back them.

Miami Heat could only dress seven players on Friday night but nearly pulled off a heroic win against the Washington Wizards. The Wizards could count themselves lucky as the Heat were without nine players for the clash, including their top three scorers.

That didn’t matter in regulation time, as Kyle Lowry hit a triple-double of 24 points, 10 rebounds and 15 assists. Nikola Jovic, the Heat’s youngest-ever starter, added 18 points. The Wizards were able to rescue themselves in the fourth quarter through the combination of Bradley Beal and Kyle Kuzma, who added 27 and 21 points to the Wizards' tally. Kuzma hit a three-pointer in the last seconds to send the game to overtime. The Wizards continued their revival into overtime and came away with the win.

The two sides will meet again on Wednesday, the Wizards’ next matchup, while the Heat will look to bounce back against the Timberwolves on Monday night in Minneapolis. With a lengthy injury list, it could be worth avoiding placing wagers at betting sites on the Heat until their roster recovers.

Golden State Warriors got back-to-back wins at the weekend, starting with a victory at the Chase Center against New York Knicks. The triumph on Sunday was more significant, with the Warriors beating the Huston Rockets at the Toyota Center to register their first road win of the season. Golden State improved to 8-9 on the season and will hope to build on that.

Klay Thompson had an excellent night for the Warriors, scoring 41 points, his best night this season. Steph Curry scored 33 to snap the 0-8 road record in a season full of disappointment for the defending champions so far. The win against the Rockets will do a lot to boost the confidence of the Warriors, and there were several excellent individual performances.

Golden State will be looking to make it repeat wins on the road on Tuesday when they face the New Orleans Pelicans. With their losing streak behind them, bettors can start to think about placing wagers on the Warriors away from the Chase Center again.

A.J. Griffin was the hero for the Atlanta Hawks as they defeated the Toronto Raptors with a buzzer-beater in overtime at State Farm Arena on Saturday. Trae Young had 33 points and 12 assists, while De’Andre Hunter scored 18 for the Hawks on the way to a nail-biting win. Young received the ball following an inbound pass with just 3.8 seconds to go. He then floated a pass over the net to Griffin as time expired for the win.

It was heartbreak for Toronto, who only dressed nine players and continued to suffer long layoffs to key players, with Pascal Siakam, Precious Achiuwa, Gary Trent Jr. and Fred VanVleet missing 18 games combined since the start of the month. Scottie Barnes made up some of the gaps, scoring a season’s-best 28 points.

They fought well and remained competitive but faded towards the end. The Raptors had a 108-101 lead well into the fourth quarter, but a scoring blitz from the Hawks put the teams level at the end of regulation. Toronto could have won at it the buzzer themselves, but Barnes wasn’t able to score the layup that would have secured an unlikely victory.

Toronto will face Brooklyn on Wednesday. Atlanta play Cleveland on Monday, and the smart money would be on the Hawks to continue that run after Saturday’s heroics if you’re thinking of making any NBA picks on your betting apps.