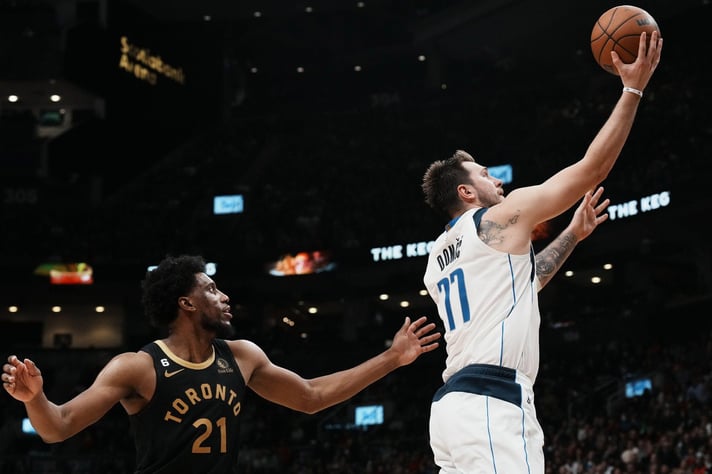 The Christmas period is always a great time for basketball fans and NBA betting, and this festive season was no exception. Luka Doncic posted a historic triple-double, the Nets’ winning streak extended to nine games, and Boston silenced anyone questioning its title credentials with a defeat of Milwaukee on Christmas Day.

Our basketball team (of writers, that is…) at Bookmakers.com, enjoyed every minute of the pulsating action in the NBA over the past few days. However, in case you missed anything during the Holidays, here are some of the biggest stories from professional basketball.

Luka Doncic achieved a triple-double unlike any other in the NBA last night in the Dallas Mavericks’ improbable overtime win against the New York Knicks, posting a career-high, franchise-record 60 points, 21 rebounds, and ten assists.

Doncic became the first player to hit more than 60 points, 20 rebounds, and ten assists in a single game in the history of the NBA. Remarkably, it is his seventh triple-double of the season. To top it all, He scored a magnificent jump shot with 1 second remaining from an intentionally missed free throw to level the game. Doncic celebrated wildly, thinking he’d won the game with the score.

“A lot of people asked me about this back in the locker room, and I said I thought we won it. I thought we won the game, and then I saw it was tied. I was like, ‘Oof,’” said the 23-year-old Slovenian. Doncic responded by scoring 7 of Dallas’ 11 points in overtime to win the game. His incredible season so far has seen him priced at +480 with some USA sports betting sites to win MVP.

It was more misery for the Knicks, sky-high a few weeks ago, coming off a nine-game winning streak, its longest in nine years. New York has now lost its last four games. New York competed well, Quentin Grimes scored 33, and Julius Randle scored 29 points, but Dallas had an ace up its sleeve with the exceptional ability of Doncic. The Mavericks improved to 19-16 on the year with the win, the Knicks falling to 18-17.

Brooklyn Nets are the hottest team in the NBA, winning nine consecutive games and surging to third place in the Eastern Conference. While the Nets’ struggled at the start of the year, the team is flourishing thanks to the simplicity of the strategy of Head Coach Jacque Vaughn.

“I am a simple person, and really try to keep things simple,” said Vaughn after the Nets beat the Cavaliers on Monday night. “We stripped out playbook down… we are simple in what we do, and we have our guys play extremely free of mind.”

The Nets thrust Vaughn into the job after its previous coach, Steve Nash, was dismissed in November with the team’s record at 2-6. The team has won 20 of 26 games since he took over, including a Christmas Eve win over the Bucks to put them at the heart of the NBA championship conversation.

In recent weeks, Brooklyn has become the third favorite to win the NBA Finals, with some NBA betting sites now offering +800 on the Nets to win its first NBA championship. The streak can be explained by several factors, including Kevin Durant’s MVP-calibre performances and the defensive prowess of Ben Simmons. A team who began the season in chaos now looks to be on the cusp of something special.

Defeating Milwaukee proves Boston is the team to beat.

Fans all over the country turned TV sets and mobile devices to what was, on paper, the most compelling matchup of the festive season on Christmas Day: a game between arguably the two best teams in the NBA, Boston Celtics and Milwaukee Bucks.

Seemingly, nobody told the Celtics the people wanted a close match-up. The game was uncompetitive as Boston preceded to swat aside its conference rival 139-118. The NBA’s best offense destroyed Milwaukee, scoring from 58.8% of its shots and 48.7% of its three-point attempts. Jayson Tatum and Jaylen Brown combined for 70 points.

Anyone hoping for some festive drama was sorely disappointed: the game only proved that Boston Celtics is the team to beat this season. Betting sites agree, and the Celtics are the runaway favorite with bookies to win the NBA at +350. There’s still a long way to go, but the Celtics look more than capable of beating any team in the league in a playoff series.

The conversation also turns to whether Jayson Tatum is now the favorite for MVP, as NBA betting apps think, valuing him at +280 to take home the Michael Jordan Trophy. He’s shooting at a career-high 47.1%, is tied for the most 40-plus games this season, and has put in great performances one-on-one this month against fellow MVP contenders Nikola Jokić, Kevin Durant, Devin Brooker, and Giannis Antetokounmpo.