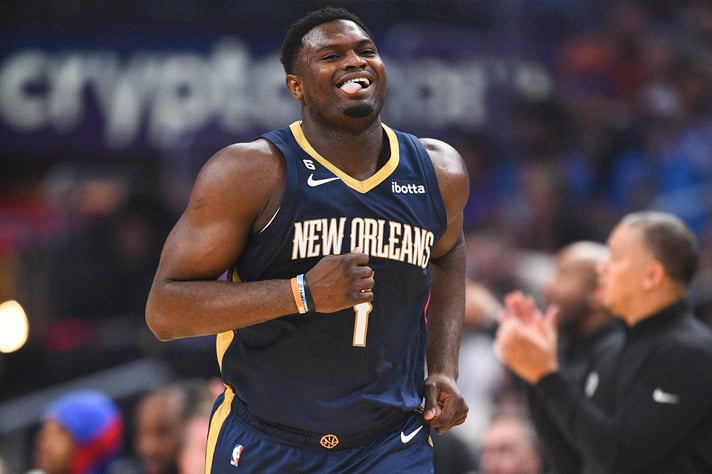 With games pretty much every day until the playoffs, there is always something happening in the NBA. This week in the Association was no different, starting with Joel Embiid posting a record game for the Philadelphia 76ers. In other news, a former NBA star has announced a huge career move, current NBA stars have been plagued by injury and one franchise posted a record it will soon want to forget.

Read our roundup of this week’s NBA news to get the latest on Zion Williamson, the Brooklyn Nets and Dwight Howard.

Zion Williamson has been the face of his New Orleans Pelicans team since being drafted with the first pick in the 2019 NBA draft. The power forward was honored in the NBA All-Rookie First Team in 2020 and followed this up by making the NBA All-Star Game in 2021. However, Williamson suffered a fracture in his right foot in the following offseason and missed the 2021/22 season.

Williamson’s right foot seems to be causing trouble again, as the star player had to sit out of the Pelicans’ game against the Memphis Grizzlies due to a contusion in the foot Tuesday night. Williamson has played well since slotting back into the lineup at the start of 2022/23, averaging 23.5 points over the season. He has also contributed 6.4 rebounds and 3.9 assists per game. With him in the lineup, he gives the Pelicans a better chance to win, meaning lower lines at NBA betting sites.

Pelicans coach Willie Green gave fans some hope by announcing Williamson is day-to-day and has a chance to play in the Pelicans’ next game against the Chicago Bulls Wednesday night. The Pelicans are 8-6 on the season and will hope to push for a place in the playoffs and maybe even go all the way to win the NBA championship. To do that, the team will be desperate for Williamson to get back on the court as soon as possible. This is also huge for any bettors considering backing the Pelicans on NBA betting apps, as Williamson will be crucial to the team securing a win Wednesday.

The Brooklyn Nets have not started the season as the team would have expected. They have already fired their head coach and sit at 6-9 on the season, good enough for 12th in the Eastern Conference. After being a dark-horse NBA Finals pick among bettors on betting sites in the preseason, the franchise went from bad to worse with a humbling 153-121 loss to the Sacramento Kings Tuesday. It is the most points the Nets have conceded in regulation time in NBA history. Lucky day for anyone who picked the over on betting apps!

Terence Davis led the scoring for the Kings, coming off the bench to score 31 points. Kevin Huerter also scored 19, and Domantas Sabonis had 17. This trio led the Kings to the franchise’s highest-scoring game in almost 30 years.

The nature of this defeat overshadowed quite a good performance from the Nets’ Kevin Durant, who posted 27 points but could not stop his team from slipping to defeat. Things were fairly close in the first quarter, with the Kings only leading by six. However, the game slipped away in the second and third quarters, with the Kings outperforming the Nets by 13 and 14 points, respectively.

While things may look bad for Nets fans now, it has been even worse in the past. While the Houston Rockets scoring 139 points in 1978 does not seem bad compared to 153, the Nets only managed 87 points on that day. That points margin of 52 is much more significant than the 32 points against the Kings. In fact, the Nets have also lost games by 49 and 47 points, so there is room for worse still, much to the disappointment of fans. However, this will be very damaging to the Nets’ confidence, so you may not want to bet on the team in the next couple of weeks when making your NBA picks.

Dwight Howard was one of the best players in the league for a stretch with the Orlando Magic and Los Angeles Lakers in the late 2000s and early 2010s. The dynamic center earned NBA All-Star honors eight straight years from 2007-2014 and also made five All-NBA First Teams. However, after an 18-year career in the NBA, Howard has started a new chapter, signing for the Taoyuan Leopards. The Leopards play in the T1 League, which was founded in 2021. While numerous European and former NBA stars play in the league, Howard is the highest-profile player to join the new league.

There will be a couple of familiar names for Howard on the roster, with 2016 Boston Celtics second-round pick Deyonta Davis playing for the team. There is also Troy Williams, who went undrafted in 2016 but played for the Grizzlies, Houston Rockets, New York Knicks and Sacramento Kings.

At 36 years old, it is the perfect time for Howard to move to a league that may not be as physically straining. It also fits with Howard’s philosophy of moving teams frequently. After spending eight years with the Orlando Magic, Howard moved teams eight times between 2012 and 2021. During that span, he played for the Los Angeles Lakers on three separate occasions, finally picking up an NBA Championship in 2020.