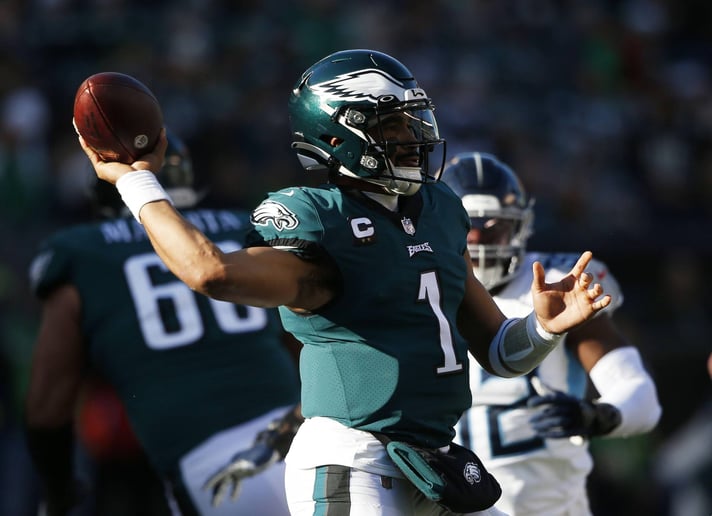 After the NFL scheduled a wild-card game Monday night, we had to wait an extra day for the NFC divisional-round schedule to be confirmed. But now we have the lineup, you can start making plans of how to make your NFL picks at your chosen NFL betting sites.

First up on Saturday night, we have the NFC's No. 1 seed, the Eagles, hosting their divisional rival Giants after New York upset the Vikings to make their first divisional round since they won the Super Bowl in the 2011 season. The final matchup of the whole round will see the Cowboys travel to California to take on the form team of the NFL in the 49ers.

Here at Bookmakers.com, we aim to give you all the betting information you could need to make smart, profitable decisions at NFL betting apps while enjoying the next round of the playoffs.

The Philadelphia Eagles and New York Giants know each very well, as they both reside in the NFC East and so play each other twice a season. The Eagles won both games handily in the regular season, but we may not be able to glean much from the Week 18 outing. By that point, the Giants had clinched their wild-card spot and rested their starters.

The first matchup was a 26-point beatdown of the Giants, though. The Eagles were able to do whatever they wanted on offense and managed to stymie Daniel Jones and Saquon Barkley on defense. Expecting another such result might be a bit much on a Giants team that produced perhaps it's best offensive performance of the season on Wild Card Weekend. Admittedly, the Minnesota Vikings had allowed the Indianapolis Colts to score 33 in a half against them in Week 15. But Jones and Barkley barely put a foot wrong all night against the Vikings to combine for four touchdowns.

Because of the 48-22 shellacking inflicted by the Eagles in Week 14, USA sports betting sites are making Philly favorites by more than touchdown. If they can stop Jones' running ability and get after him in the backfield, the 7.5-point margin looks skinny. But if not, this could be a shootout, making the 48-point over-under line look awfully small.

What to make of the Dallas Cowboys? Are they the team that failed disastrously in prime time in Weeks 1 and 18 against the Tampa Bay Buccaneers and Washington Commanders, respectively? Or are they the team that went into that Week 18 matchup with a chance of being the NFC's No. 1 seed this postseason? The answer to that may lay with Dak Prescott, who has played potentially his worst season as a pro, with 15 interceptions in just 12 starts. In those games against the Bucs and Commanders, he went just 28-of-66 for 262 yards and threw two picks. Another shocker like that would end their season Sunday night.

At this point, I think we can safely say what the San Francisco 49ers are. And that is a scary proposition for any team facing them this postseason. Even with a third-string rookie quarterback in tow, they are winners of their last 11, with only three teams in that span even coming within one score of them. They are a lethal combination of explosive offense and stifling defense, and with Brock Purdy having got one start (and starring performance) under his belt in the playoffs, the nerves should be settled.

Most US betting apps seem to think the Cowboys are closer to the NFC contenders they were than the two particularly bad outlier performances and have the 49ers as 3.5-point favorites. If Prescott gets back to his pick-happy game of this season, that is going to look very tight.