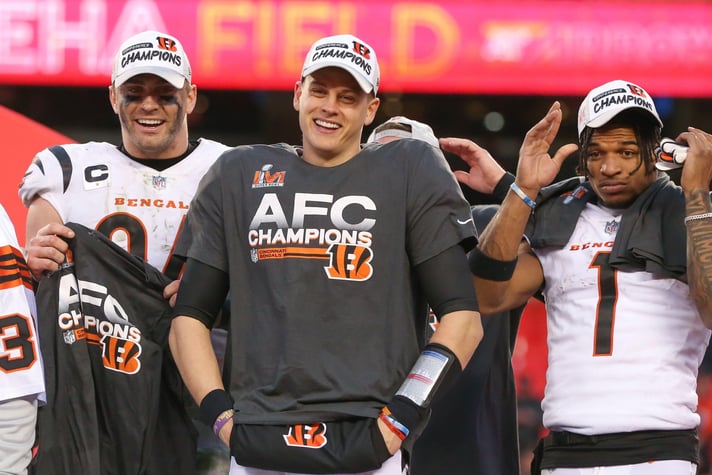 Thirty-two teams started the season in the second week of September with ambitions of winning the Super Bowl, with some hopes more realistic than others. Now we're down to four after an exciting divisional round of matches. With two No. 1 seeds, a No. 2 and a No. 3 remaining, NFL betting sites are having a hard time separating any of the contenders. At present, the Chiefs are the favorites at +250, while the fourth favorite 49ers are +300.

With so little to choose between the four teams, here at Bookmakers, we aim to give you all the relevant betting information so you can make the best informed decisions when choosing your NFL picks at NFL betting apps.

The first game in the schedule is Sunday afternoon, where the NFC's top-seed Eagles will be hosting the 49ers. So let's get to it.

The San Francisco 49ers entered the postseason as the NFL's form team having won 10 straight games to end the regular season. The Philadelphia Eagles, on the other hand, had been the last unbeaten team in the NFL and were a win away from securing the conference's No. 1 seed for the final three games of the season. An injury to starting quarterback Jalen Hurts delayed their confirmation for the top seed to the last game of the regular season.

Hurts struggled somewhat through the Week 18 tilt against the New York Giants on his return from injury, but he looked in prime form for the divisional round beatdown of the same Giants. The Eagles were 28-0 up at halftime on the strength of Hurts' arm, their arsenal of running backs and prolific pass-rushers. Once they went in so far ahead at the half, they could take their foot off the gas somewhat and save themselves for this huge game.

The 49ers had made relatively serene progress through to the NFC Championship Game against the Seattle Seahawks. After going in at the half one point adrift of Seattle, they accelerated past to win 41-23. Sunday night's divisional matchup with the Dallas Cowboys was something a little more attritional. The 49ers were held to their lowest score (19) since Week 12, but they kept an opponent to 15 or below for the 10th time this season.

This game will see two ferocious pass rushes come against one another, and which offensive line holds up the best may hold the key to the winner. USA sports betting sites are giving the edge to the Eagles at present.

Hands up who's excited for a repeat of last year's AFC Championship Game?! The Kansas City Chiefs are, remarkably, playing in their fifth straight AFC Championship Game, which just so happens to coincide with the number of seasons that Patrick Mahomes has been the Chiefs' starter.

Mahomes and the Chiefs suffered a major scare in the first half of their 27-20 win over the Jacksonville Jaguars as Jags pass-rusher Arden Key fell on top of the quarterback, which rolled his ankle. He went for X-rays to check no bone had been broken and played the whole of the second half. He has been diagnosed with a high ankle sprain, but you have to wonder how limited he might be with just one week of recovery.

The Cincinnati Bengals scored a touchdown inside three-and-a-half minutes of their divisional matchup with the Buffalo Bills and never looked like relinquishing control from then on in a relatively comfortable 27-10 victory Sunday. The Bengals had won eight straight to end the regular season - including a 27-24 win over KC in December - and now look primed for this matchup with the Chiefs favored by just a point with most US betting apps.

In last year's AFC Championship Game, the Chiefs stormed into a 21-10 halftime lead before the Bengals made defensive adjustments and took the deep ball away from Mahomes. He couldn't dink and dunk his way to the end zone for the rest of the game as Cincy won in overtime. Will we see the same tactics in this game? It promises to be a great end to the conference championship weekend.