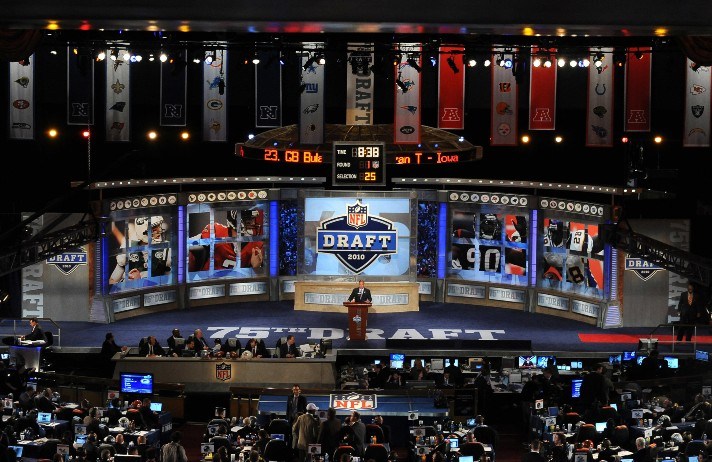 With the event a three-day extravaganza, this year taking place in Las Vegas between April 28 and 30, it provides plenty of chances for people to win some money on how they think their team might pick. It means that those looking to sign up with the best NFL betting sites will always want to see markets available on the NFL draft, be it how their team will pick, how many quarterbacks will go in the first round or whether an offensive or defensive player will go first overall.

Given it’s such a big event these days, those watching, and wagering, will always want to find a leg up on the competition. With that in mind, we have analyzed historical data to reveal how often certain positions are picked in the first round, and which position has been picked first overall the most since 1981.

Protecting and Getting to the Quarterback Trumps in 1st Round

Looking at every historical first-round pick since 1981, you can see that teams value the art of protecting their quarterback and getting after the opposing signal-caller above all else. Just under 25 percent of all picks have been made on defensive ends or offensive tackles. It is clear that this importance only goes as far as the outside linemen, as nose tackles, centers and guards combine to make up just under a fifth of the defensive ends and offensive tackles combined.

Skill position players such as wide receivers, cornerbacks, running backs and quarterbacks are also in demand in the first round, unsurprisingly given the importance of attacking and defending through the air in today’s NFL.

Finding a Franchise Quarterback the Priority at No. 1 Overall

While there is a relatively even spread of positions picked in the first round overall since 1981, the same cannot be said for the first overall picks in the draft. The most important position in the game is quarterback, and front offices understandably get a little trigger happy if they are first on the clock and without a signal-caller good enough to win it all for the team.

Over half of the first overall picks since 1981 have been on quarterbacks. Of the 23 picked No. 1, 14 went to at least one Pro Bowl but only five have won Super Bowls as starters, so it could pay to have some patience if you’re a front office decision-maker. The next most popular position has been at defensive end with seven picks since 1981, with the most recent being Myles Garrett in 2017.

Using our historical data and picking up what experts around the league are saying in the lead up to next week’s draft, we have compiled our own mock first round draft:

With the data supplied from the first round of every draft since 1981 and our mock draft, we can make some educated guesses as to which bets look like smart picks this time around, and which don’t. Here are some wagers you’ll find with NFL betting sites we think it’s worth taking advantage of.

Travon Walker to be Taken No. 2

History tells us that defensive linemen are picked at a high volume in the first round of the draft, and if most draft experts are to be believed, the top selection this year is between Aidan Hutchinson and Travon Walker. There is almost a consensus that Hutchinson will be the No. 1 overall pick for the Jaguars, which makes a price of 4/1 on Walker being the No. 2 pick very appealing.

Take the Under on Offensive Linemen to be Drafted

Since this is a down year for star quarterbacks in the draft, it would be tempting to think there will be a surplus of offensive linemen taken in the first 32 picks. However, since 1981, there has been an average of 5.2 offensive lineman taken in the first round. Our mock has six such players being taken, so the line set at 7.5 seems too high to take on. Many betting sites will be running betting offers for signing up in the lead up to the draft, so taking the under 7.5 offensive linemen with such an offer would be a good move.

Ahmad Gardner to be Taken in Top 5

Cornerbacks aren’t always thought of as top-five picks. However recent history suggests it is happening more often. Indeed, in three of the past six drafts, there has been a corner taken in the top five picks. This year, the consensus top perimeter defender is Cincinnati’s Ahmad Gardner. Despite playing for a team in the lowly American Athletic Conference, recent history and the opinions of experts around the league suggests a price of 1/1 on him being a top-five pick would be a good bet.

Take the Under on Quarterbacks

At this time of year, it seems quarterbacks are scrutinized more than any other position, which usually leads to teams convincing themselves to take a signal-caller who doesn’t deserve to be picked. However, this year appears to be different with very few slam dunk prospects. History tells us that there are an average of 2.5 quarterbacks taken in the first round each year. Not since the 2015 draft have there been fewer than three quarterbacks taken, but this year looks like a good time to take the under 2.5 line despite what you may hear in the lead up to the big day.

Runnings Backs Still Get Taken in the 1st Round

Mark Fordham
@MWFordham
27 Articles
Mark spent over a decade as a sports reporter and editor with Goal.com and Bleacher Report. He is now a Content Editor at Bookmakers.com covering all manner of sports from the Premier League and cricket to the NBA and NFL.
Read Articles

Commercial content notice: Taking up one of these offers may result in a payment to bookmakers.com. Over 21s only please gamble responsibly. Offers updated 28th September.