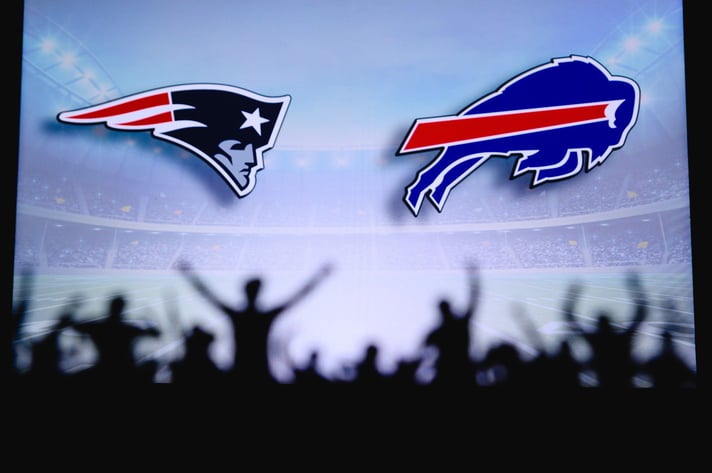 We've hit the back stretch of the NFL season and fanbases are starting to dream of Super Bowl celebrations. There is still time to pick a winner with NFL betting sites.

Let Bookmakers.com guide you through all of the matchups for Week 13 and their ramifications for the rest of the season so you can make the best possible NFL picks at NFL betting apps.

Rarely has an AFC East matchup this late in the season mattered so much to both teams. The New England Patriots and their dynasty were so used to having the division to themselves, while the Buffalo Bills fed off scraps after their glory years. But now the playoffs are on the line for both.

A defeat for the Patriots would almost certainly see their playoff hopes go down with the result. The recent omens aren't great, as they have lost four of their last five to Buffalo. The Bills need to keep pace with the Dolphins atop the AFC East until they meet in Week 15.

The teams picking No.1 and No. 2 respectively in the 2022 NFL draft will go head-to-head in Week 13. The matchup between the Jacksonville Jaguars' Travon Walker and the Detroit Lions' Aidan Hutchinson may be the only thing that matters to outsiders coming into this matchup of bottom-half teams.

Both teams have a 4-7 record on the season, which is more optimistic than for most teams given their struggles in recent years. Trevor Lawrence is maturing before our eyes, while the Lions are playing as hard as any team each week. It will be a fun watch, even if there isn't much on the line.

Both the Philadelphia Eagles and Tennessee Titans will have more than just a victory on their minds entering this week. Playoff positioning is key the closer we get to the end of the regular season.

The Eagles enter Week 13 with the best record in the league at 10-1 after holding off the Packers 40-33 on Sunday Night Football. The Titans have a below-average offense, but they keep churning out results and have the AFC South almost sewn up already. They will have their eyes on a deep playoff run.

From a contest all about playoff seedings to one about NFL draft positioning. The Pittsburgh Steelers are primed for top-10 pick, but could it be a top-five pick as losses mount? If the Atlanta Falcons throw in the towel on the season, can they still get a top-10 pick?

The Steelers' hopes of a top-five pick took a dive after they beat the Colts 24-17 on Monday Night Football. As things stand, Pittsburgh would be picking 12th overall, though there are a total of 10 teams currently on four wins this season, ranging from the fifth overall pick to the 14th. The Falcons lost on Sunday to take their record to 5-7. Don't expect fireworks in this one.

It feels odd to say coming into Week 13, given recent history, but the New York Jets are in the thick of the playoff hunt. Much of that is in spite of 2021 No. 2 overall pick Zach Wilson. The Minnesota Vikings are in a tussle for the No. 1 seed in the NFC come playoff time.

Wilson was benched for the Jets' Week 12 win against the Bears. His replacement, Mike White, had three touchdowns and 315 yards on 22 completions. If he continues playing like that, the Jets could be a wild-card team. The Vikings held off the Patriots Thanksgiving night to recover from their 40-3 defeat to the Cowboys.

If the first 12 weeks of the season have taught us anything, it's that if the Baltimore Ravens are able to score more than 20 points against the Denver Broncos, they are likely to win. That's not a high bar for Lamar Jackson and co. to reach.

The Ravens lost their first match in five with a 28-27 defeat to the Jags, while the Broncos lost their third straight with a putrid offensive display against the Panthers. The sharks are circling for Russell Wilson, but Denver would be on the hook for $107 million in dead cap money if they cut him this offseason. All of this points to a Ravens win.

The Cleveland Browns look set to have Deshaun Watson debuting in Week 13. The fact it's against his old team, the Houston Texans, makes the matchup that bit more interesting.

Watson's return had to come against the Texans. His backup, Jacoby Brissett, helped the Browns to a fifth win of the season Sunday against the Bucs. Can the Texans, losers of six straight and winners just once this season, get one over their old starting quarterback this week? Probably not, and the line reflects that.

After five weeks of the season, the Washington Commanders looked dead and buried in a surprisingly strong NFC East, but they have improved immeasurably and will provide a stern test for their playoff-chasing divisional rivals, the New York Giants.

After those five weeks, it would have been unthinkable that the Commanders would start as 2.5-point favorites going into this match. However, the Commanders have won six of their last seven, while the Giants have lost three of their last four. A defeat for either in this matchup could ruin their playoff hopes.

Aaron Rodgers and the Green Bay Packers have notoriously "owned" the Chicago Bears in recent times. This has been a strange season, though, and Justin Fields could help provide a more difficult test for the Cheeseheads if he is healthy.

When the Packers beat the Bears 27-10 in Week 2, it appeared as though it would be another season of struggle for the Bears, while the Packers would be competing with the NFC's best again. While the former is true, the Packers have only won three times since then and Rodgers picked up an injury in Week 12. This could get interesting.

Both the Miami Dolphins and San Francisco 49ers are locked in tight playoff battles in their own divisions. A loss here could have huge ramifications come January.

This matchup sees an electric aerial offense take on a traditional ground-and-pound team, and something will have to give. The 49ers have won four consecutive matches to get to the top of the NFC West, while the Dolphins have won five straight. They are also 8-0 in games started by Tua Tagovailoa this season.

Odds will appear here when they become available.

At the start of the season, anyone saying the Seattle Seahawks with Geno Smith under center would be contending in the NFC West coming into Week 13, while the defending Super Bowl champions, the Los Angeles Rams would be last in the division would have been laughed out of the room. But here we are.

It's testament to quite how badly the season has gone for the three-win Rams that they are eight-point home underdogs to the Seahawks. Matthew Stafford missed last week with a concussion and there is no date on his return yet. The Seahawks need a win after losing two in a row and relinquishing the lead in the division to the 49ers.

These two divisional foes would have had large aspirations of going deep in the playoffs this season. But for one reason or another, both the Los Angeles Chargers and Las Vegas Raiders have underperformed this season, one way more than the other. Looking at you, Vegas.

The good news is that the Raiders have now won two games in a row. the bad news is that's only good enough for four wins after 11 games. Their opponents, the Chargers, could well be bumped out of playoff contention with a loss, so there is a lot riding on this road game.

This is a repeat of the AFC Championship Game from the 2021 season. In that game, the Cincinnati Bengals took away the deep ball to Tyreek Hill and dared Patrick Mahomes to dink and dunk his way to victory. That loss possibly led to Hill's offseason trade to the Dolphins, but the Kansas City Chiefs will be out for revenge.

Mahomes and the Chiefs are the AFC's number-one seed and have won five in a row. They have only lost twice this season, curiously one of those being against the Colts. They travel to Paycor Stadium with revenge on the mind. Joe Burrow and the Bengals have won three in a row and are now in a tie for first place in the AFC North.

One team in this is playing for playoff seeding, and the other is inexplicably still trying to win in a losing season. It has been a strange season for the Indianapolis Colts, who have been humiliated more than once on and off the field but also hold a victory against the Chiefs. The Dallas Cowboys are in the thick of the playoff hunt, and will keeping trying to hang on the coattails of the Eagles.

This one could get ugly. While the Colts defense has been playing lights out for most of the season, the offense is among the worst in the league. The Cowboys have won two in a row, including a huge 40-3 victory of the NFC's number two seed, the Vikings.

Can Tom Brady and the Tampa Bay Buccaneers have one last dance in the playoffs this season? If they lose to the New Orleans Saints this week, I wouldn't count on it.

Not for the first time this season, the NFL's scheduling has backfired on it. This would have looked an intriguing matchup coming into the season, but the two teams have a combined nine wins this year. Brady's Bucs lead the putrid NFC South with a 5-6 record.