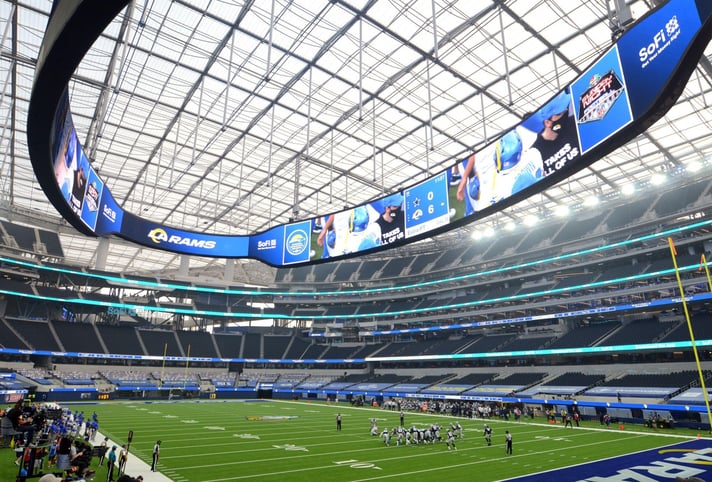 There are just five weeks left in the NFL season, so now is the time to see which teams look like safe bets at NFL betting sites to make the playoffs. With every team still jostling for position in both the playoffs and the NFL draft, there is much to play for in Week 14.

With all the odds, spreads and betting information needed to make the best possible NFL picks at NFL betting apps, let Bookmakers.com guide you through this week's slate.

The NFL would have likely seen a matchup between the Los Angeles Rams and Las Vegas Raiders in Week 14 as a dark-horse Super Bowl possibility in preseason. Now, however, the league will likely be hiding behind its hands watching this one.

The Raiders are winners of their last three but will still likely be watching the playoffs from their couches. The Rams are losers of their last six and in line for the fourth overall pick in the 2021 NFL draft. It's a shame that pick will be Detroit's as a result of the Matthew Stafford trade.

The AFC North rivalry between the Baltimore Ravens and Pittsburgh Steelers has been dominated by the latter in recent times. Mike Tomlin's crew have won the last four. The rot likely would have been stopped if not for Lamar Jackson's injury in Week 13.

Jackson's injury means this is a much more interesting matchup than might have been the case. He is considered doubtful for this matchup, and the Steelers have rallied to two consecutive wins over the Colts and Falcons. A defeat for the Ravens would open up the AFC North for the Bengals. Intrigue surrounds this one now.

Similarly, this AFC North rivalry between the Cincinnati Bengals and Cleveland Browns has been dominated by the latter. Surprisingly, the Bengals have lost eight of the last nine matches between the two.

We should all expect that record to read eight of the last 10 matches after Sunday. The Bengals, fresh off beating the AFC No. 1 seed Chiefs, have won four in a row and are eyeing the division win and a possible first-round bye if they keep up their form. The Browns had their defense to thank for a second consecutive win over the lowly Texans Sunday.

The AFC South has been the Tennessee Titans' the last three seasons. The Jacksonville Jaguars will have had designs on changing that this year, but it might have to wait for the 2023 season.

The Titans are losers of two straight but have no worries about losing their grip on the AFC South. All the teams in the division have combined for 13 consecutive defeats. The Jaguars have shown some signs of life in recent weeks through Trevor Lawrence's development, but they were shellacked by the Lions in Week 13.

In a theme the NFL probably didn't envisage when backloading the schedule with plenty of divisional tilts, this is a matchup between divergent NFC North competitors. The Minnesota Vikings are gunning for a Super Bowl. The Detroit Lions, to put it kindly, are not.

However, if the Lions had started the season the way they have played the five weeks, we would be looking at a playoff contender. They have won four of their last five and actually enter this contest as the favorites despite the Vikings' 10-2 record. The Vikes are becoming specialists at squeaking home, as evidenced by the fact they have a worse point differential than the Lions despite having won five more matches.

Finally, we have a divisional matchup in Week 14 with playoff ramifications for both teams. The Philadelphia Eagles and New York Giants have been surprise packages this season and will have large postseason aspirations.

This would have been an even more intriguing playoff contest if the Giants hadn't missed a late field goal in overtime of their matchup with the Commanders. That led to the season's second tie and leaves the Giants a few games back of the Eagles. Philly continued to roll with a dominant 35-10 win over the Titans Sunday.

The two Texas teams, the Houston Texans and Dallas Cowboys, have a geographical rivalry as opposed to a divisional one. It'll be hoped that creates some atmosphere at the AT&T Stadium as the teams are at opposite ends of the spectrum.

The Cowboys have really hit top form in the last three weeks. First, they battered the Vikings 40-3 then they scored 33 unanswered points in the fourth quarter alone to beat the Colts 54-19. The Texans have lost seven in a row and the 17-point cushion given by NFL betting sites may not be enough here.

The New York Jets snapped a four-game losing streak to the Buffalo Bills this season. If they can make it two wins over their rivals, they would have a huge divisional advantage in qualifying for the playoffs.

The Bills are the new No. 1 seed in the AFC after the Chiefs were knocked off by the Bengals. The Jets have gone win-loss in each of the last six games to dampen the postseason optimism in New York. If Mike White can emulate John Elway once more, perhaps they can upset the Bills again.

The Denver Broncos were supposed to be competing for the AFC West division title with the Kansas City Chiefs this season. That hasn't materialized, and we could see how big the gulf is between these two in Week 14.

The fact the NFL has deemed it necessary to flex this game from prime-time Sunday Night Football despite Patrick Mahomes featuring tells you all you need to know about how the season has gone for Russel Wilson and the Broncos. The Broncos have the third-worst record in the league but will be giving up that prime draft capital to the Seahawks as part of the Wilson trade.

The Seattle Seahawks have been one of the surprise packages of the season, with the offense positively humming under Geno Smith. The same cannot be said for the Carolina Panthers offense.

The Panthers' starting quarterback for the first five games of the season, Baker Mayfield, was released this week. It's just another chapter in what has been a saga at the position for Carolina. Sam Darnold is their third starter this year, and he may be given the reins for the rest of the season. The Seahawks are just a game back from the NFC West-leading 49ers, and they are due to play in Week 15.

The Tampa Bay Buccaneers have not looked close to their 2020 Super Bowl-winning selves this season. But they will need to start doing so against the likes of the San Francisco 49ers if they are to get back there this season.

The 49ers lost their second quarterback for the season due to injury. Jimmy Garoppolo broke his foot against the Dolphins and this year's Mr. Irrelevant, Brock Purdy, led them to an unlikely win. He will have to keep that level up if they are to make the playoffs. The Bucs have a stranglehold on the NFC South after a stirring fourth-quarter comeback from Tom Brady Monday night against the Saints.

In the leadup to the NFL draft in 2020, all the talk was surrounding which of the Los Angeles Chargers and Miami Dolphins would draft Justin Herbert and Tua Tagovailoa. This is the second time they will meet since that draft, with Tua coming out on top first time.

The Dolphins dropped their first game of the season in which Tua Tagovailoa finished the game. They did so against the 49ers' third-string signal-caller. It's not time to panic in Miami, but they will need to beat the Chargers to assuage any fears. The Chargers are seemingly having the season that no one expected but should have after 7-9 and 9-8 seasons. Expect this to be head coach Brandon Staley's last one in charge.

Bill Belichick is used to leading the New England Patriots in prime-time matchups, but his team have much less experience in them these days. A game against the struggling Arizona Cardinals under the Monday night lights could keep the Pats' offseason hopes alive.

The Pats have lost two straight to sit bottom of the AFC East once again. However, at 6-6, all is not lost just yet. They play a Cardinals team that has won four games all season and would own a top-10 pick in next year's draft. Kliff Kingsbury's job may depend on how the Cards finish this season.