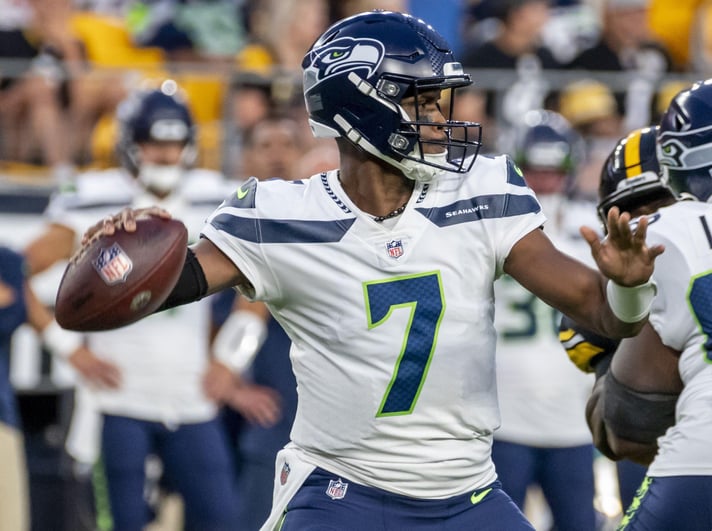 We've gotten through the back straight of the NFL schedule, and now we're into the home straight. These last four weeks of the season are for positioning for the postseason and the offseason's NFL draft. With all of the information we already have from the season thus far and the betting lines and odds, we'll aim to steer you to the right NFL picks with the best NFL betting sites in the Week 15 slate.

This contest between the San Francisco 49ers and Seattle Seahawks will go a long way to deciding the winner of the NFC West. It is a match deserving of the Thursday Night Football prime-time slot.

A few short weeks ago the Seahawks were leading the NFC West with the 49ers trailing in their dust. However, the 49ers are on a six-game win streak - even with a rookie third-string quarterback in tow - while the Seahawks appear to have reverted to the mean. A win for the home team would really shake up the division.

This week pits one team hoping to have a deep playoff run against another limping to the end of the year. The Minnesota Vikings are still chasing that NFC East title, while the Indianapolis Colts have long since lost hope of winning the AFC South or making the playoffs.

The Vikes are 10-3 on the season but somehow have a negative point differential. They encounter a Colts team circling the drain and yet still are only four-point favorites. Can the 4-8-1 Colts, currently riding a three-game losing streak, really go on the road and upset the NFC's No. 2 seed? NFL betting sites aren't ruling it out.

AFC North matchups between the Baltimore Ravens and Cleveland Browns will always mean something. However, this is likely to be about pride for the Browns more than anything else.

The Ravens top the AFC North with a 9-4 record, while the Browns are 5-8 with very little hope of a postseason spot. So, why are they small favorites for this encounter? Well, star quarterback Lamar Jackson is doubtful for the Browns. They still managed to pull out a victory over the Steelers 94 total passing yards Sunday.

Speaking of deserving a prime-time slot, this AFC East matchup between the Buffalo Bills and Miami Dolphins could have two playoff participants in it. Which one will win the division is still to be decided.

The Dolphins will have to win out from here to take the AFC East crown from the AFC's No. 1 seeds, the Bills. The Dolphins have now lost two games in a row but finish the season with three AFC East bouts. The Bills have won four in a row and would virtually guarantee top spot in the division with a win here.

The NFC South has been the most disappointing division in the league this season, with the leader barely reaching .500 at any point. The Atlanta Falcons have led the division for multiple weeks this season even while disappointing. The New Orleans Saints have just been disappointing.

The Falcons are just one game out of the lead of the NFC South, but the main focus in this contest is the first NFL start of rookie third-round pick Desmond Ridder. After weeks of inconsistent play from Marcus Mariota, the Falcons have made the change to the Cincinnati product. Color us intrigued.

The Philadelphia Eagles are still aiming to secure the number one seed in the NFC this season having just qualified for the playoffs last week. The Chicago Bears, while enjoying the development of Justin Fields, will be watching the playoffs from their couches.

The Eagles and Bears have a combined 15 wins this season. Unfortunately for the Bears, they have contributed just three to that total. The Eagles are hitting top form just as we approach the end of the season. The question in this game may be how long the Eagles keep their starters in this one if things get out of hand early.

It has been a long time since Gang Green have been excited about New York Jets this late in the season. But they are riding a young team potentially to the playoffs. The Detroit Lions have played virtually every team hard this season, with varying results.

The Jets have lost two in a row and may need to break that streak this week to stay in with a shot of a wild-card spot. They face a Lions team on a tear. They have won five of their last six, with the one defeat a three-point loss to the AFC's No. 1 seed, the Bills. This could be an exciting matchup between two young upstart teams.

This game between the Carolina Panthers and Pittsburgh Steelers  in Week 15 may be the definition of meaningless in the NFL. Neither team will be making the playoffs yet neither are so bad they will be troubling the number one overall pick in the draft.

The Panthers are 2-0 since turning to their third starting quarterback of the season in Sam Darnold. Can Darnold play his way into the team's plans with a strong end to the season? The Steelers could be without Kenny Pickett because of a concussion, which would mean another start for Mitchell Trubisky.

If the NFL were to allow handicaps in a game, the league might consider it here. This week pits the AFC's second seed Kansas City Chiefs with their MVP favorite in Patrick Mahomes against the one-win Houston Texans.

The Cowboys were larger favorites against the Texans last week and ended up needing a touchdown deep in the fourth quarter to seal a four-point win. Perhaps that has spooked NFL betting apps, with the line at two scores for the Chiefs this week.

The Dallas Cowboys are a trendy Super Bowl pick for some observers and will need to keep winning. Trevor Lawrence has looked closer to the number one overall pick this season, but the Jacksonville Jaguars will have to wait until at least next season for Super Bowl thoughts.

The Cowboys had been humming before their hiccup against the Texans Sunday. They came awfully close to losing to a one-win team. But instead they extended their win streak to four games to keep the pressure on the Eagles in NFC East. The Jaguars stomped on the Titans and actually closed the gap between the teams to two games.

For two teams with legitimate Super Bowl aspirations coming into the 2022 season, this has been an unmitigated disaster for the Denver Broncos and the Arizona Cardinals. Pride is about all they can salvage at this point.

Kyle Murray went down with a suspected torn ACL on Monday Night Football, which explains how the Broncos are slight favorites for this despite losing five in a row. A win for Arizona would potentially take them out of the running for a top-five draft pick in the offseason.

The Las Vegas Raiders have restored some pride in recent weeks, but in doing so they have tanked their chances of a top pick in the NFL draft in the offseason. The New England Patriots have stayed relevant and in the playoff hunt without anyone really noticing.

The Raiders came into the Week 14 matchup with the Rams having won three straight and they led 13-3 at halftime only to give up 14 fourth-quarter points to lose 17-16. That result typifies their season. The Patriots beat the Cards Monday night to move into third in the AFC East. If the season were to end today, they would be in the final wild-card spot.

Despite being a flawed team, the Tennessee Titans once again own the AFC South - or at least they should. That may say more about the state of the division that anything else. With Justin Herbert at quarterback, more is expected of the Los Angeles Chargers They are still in the wild-card hunt, but it just feels like an underwhelming season so far.

The Titans have now lost three in a row, including to the Jaguars this past Sunday to suddenly make the AFC South mildly interesting. The two teams face each other again in the final game of the season, and if the Titans don't improve that match could determine the division's winner. The Chargers got their best win of the season against the Dolphins Sunday and are in the wild-card race.

The Tampa Bay Buccaneers reside in the most disappointing division in the league this year. They have been floating at .500 or less yet still leading the division for some time. After a poor start to the season, the Cincinnati Bengals are rolling as we reach the final stretch.

The Bengals have won five straight and are on course for a playoff berth for the second consecutive season. The Bucs are similarly on course for a postseason berth, but they are limping there at under .500 at present. That says more about the putrid NFC South than anything else.

Just two weeks after facing off at MetLife Stadium, the New York Giants and Washington Commanders will do battle once again in Week 15.

The two teams battled to a tie after the Giants failed with a late field-goal attempt in overtime. Both teams are now 7-5-1 and in the mix for wild-card spots. A defeat for either team would put a dent in their chances come the end of the season.

Not for the first time this season, the NFL has scheduled a game on prime time that would have looked great in preseason but is now more of a dud. The Los Angeles Rams have perhaps produced the worst defense of a Super Bowl crown in history, while the Green Bay Packers have encountered myriad issues on and off the field.

The Packers have won two of their last nine matchups and yet are still handy favorites for this Monday Night Football contest. This may be more about Christian Watson touchdown watch than anything else. The rookie is chasing the favorites for the Offensive Rookie of the Year award with seven touchdowns in the last four weeks.