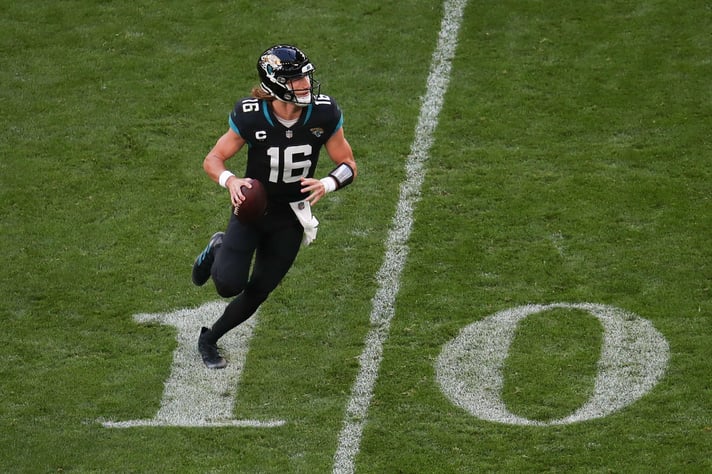 Over four months of blood, sweat and tears will almost be for nought for 18 of the NFL's teams this week. That's right, we've reached the final week of the NFL season. And while some teams with high draft picks may not be too upset with how the season has panned out, there will be heartbreak for some who miss the playoffs. At Bookmakers.com, we will try to guide you to the best possible NFL picks when visiting NFL betting sites leading up to this slate of games.

In what has become an annual tradition, Patrick Mahomes and the Kansas City Chiefs are preparing for what they hope is a deep playoff run. The Las Vegas Raiders broke with recent tradition last year when they qualified for the postseason. They've reverted back to type this season.

The Saturday night curtain-raiser in Week 18 has something on the line for the Chiefs. They will be awaiting news of when the Bills' Week 17 tilt against the Bengals will be completed so they will know if the No. 1 seed in the AFC is in their own hands or not. The Raiders were knocked out of contention in Week 17.

Rarely has a game mattered so much to the Jacksonville Jaguars in recent seasons. At the midway point in the year, their season was lost. However, the Tennessee Titans' collapse opened the door for Trevor Lawrence and co. Now they need to walk through it.

The Jags are leading the way in the AFC South and know a victory will be enough to secure their first postseason berth since 2017 and only their fourth in the 21st century. The Titans have lost six in a row to go from 7-3 to 7-9. Expect the Jags to hold serve at TIAA Bank Field.

The Cincinnati Bengals spent most of the season playing catch up with the Baltimore Ravens before finally overtaking them in Week 15. The question will be whether these playoff-bound teams will rest any starters.

The Ravens lost to the Steelers in Week 17, while the Bengals had their Week 17 matchup with the Bills cancelled after Damar Hamlin had a cardiac arrest in the first quarter of their Monday night matchup. It's hard to believe both Bengals and Bills players won't be affected by what happened Monday night.

After spending so long in the shadow of their AFC East opponents, the fans of the Buffalo Bills should particularly enjoy this matchup with the New England Patriots in Week 18.

As mentioned above, the Bills' Week 17 matchup has been cancelled. Our thoughts go out to Hamlin first and foremost. The Bills are chasing the No. 1 seed and a coveted first-round bye so will likely play the strongest team possible Sunday and no doubt will be playing for Hamlin.

This matchup between the Pittsburgh Steelers and Cleveland Browns will be sweet relief for fans. The hope will be that better times are coming in the 2023 season.

The Steelers kept alive their playoff hopes with a victory over the Ravens in Week 17. They have won three in a row and need a fourth to have any chance of postseason football. They will also need the Dolphins and Patriots to lose. The Browns will already be planning for next season.

The Indianapolis Colts and Houston Texans played out the season's first of two ties in Week 1. They have since combined for fewer than 10 wins on the season.

The Colts have lost six straight games and managed to embarrass themselves on national TV more than once in that time. The Texans are continuing to fight each week but are still on course for the first overall pick in the 2023 NFL draft.

The Miami Dolphins were chasing the top seed in the AFC for much of the season, but now a wild-card spot may not even suffice for the Fins. The New York Jets have appeared ready to compete in almost every position this season except the most important, quarterback.

What a difference a few weeks makes. In this case, five. Both the Jets and Dolphins have lost five games in a row, eliminating the former from playoff contention and leaving Miami relying on help from others to make it into the postseason. A win over the Jets and a Patriots loss would do it for Miami.

The New Orleans Saints may have learnt this season they can't keep putting a Band-Aid on the quarterback position and expecting things to be fine. The Carolina Panthers have had a colorful season, mostly for the wrong reasons.

At different points in Week 17, both the Panthers and Saints were looking good for the NFC South title. Then the Panthers collapsed against the Bucs to nosedive both teams' chances. Both will be thinking of the offseason this week.

The Vikings lost their chance at getting the No. 1 seed in the NFC with a 41-17 shellacking by the Packers. This Vikings team might have won 12 games, but it doesn't look built to compete with the other powers in the conference. The Bears lost their ninth straight game in Week 17.

No team wants to win the putrid NFC South this year it seems. The Atlanta Falcons led the division for a few weeks before downing tools, while the Tampa Bay Buccanneers have been leading for most of the second half of the season despite hovering below .500.

This is something of a lost game for the NFL. The Falcons can't better their position of seventh in the first round of this year's draft, but a win would take them potentially outside the top 10. The Bucs can't improve on their postseason position but can finish with a record better than .500 with a win.

The Los Angeles Rams will be thankful when the clock expires on this season. It has been miserable almost from the opening kickoff. The Seattle Seahawks have been surprisingly competitive, but they have seemed to run out of steam in the final weeks.

They reignited their postseason chances with a 23-6 win over the Jets last week. A win combined with a Packers loss would be enough for the Seahawks to be extending their season by at least a week. The Rams, if anything, are trying to make the position of their first-round pick a little less good since they owe it to the Lions.

The fight at the top of the AFC West between the Chiefs, Raiders, Los Angeles Chargers and Denver Broncos was supposed to be fierce. However, the Broncos' ineptitude never made that a possibility.

The Chargers have won four straight, but they are unlikely to be able to improve their standing in the AFC playoffs. Denver are ensconced in the third overall pick for the draft. We should say that pick is owed to the potentially playoff-bound Seahawks.

With the NFC's No. 1 seed and a first-round bye in the playoffs already wrapped up with a game to spare, will the Philadelphia Eagles play their starters against the New York Giants? That could go a long to determining this result.

This season was looking like it would be Ron Rivera's last as coach of the Washington Commanders after five weeks in the season. However, they fought until the very end to try claim a wild-card spot. The Dallas Cowboys are still chasing the No. 1 seed in the NFC.

The Cowboys haven't lost hope of the No. 1 seed in the NFC and can secure it with a win and defeats for both the Eagles and 49ers. The Commanders were eliminated from playoff contention last week after a woeful offensive performance against the Browns.

The Arizona Cardinals are playing out what has been a miserable season for them with head coach Kliff Kingsbury's seat getting scorching hot heading into the offseason. Can the San Francisco 49ers mount a serious Super Bowl push with a third-string quarterback?

The 49ers are the firm team in the NFL right now, having won nine straight matches. The Cardinals have lost six in a row, so the winning the game portion the Cardinals need to get the No. 1 seed should be safe. The 49ers also need the Eagles to lose to get that spot.

It is very unusual for the Detroit Lions to be in the postseason picture this late in the season alongside the Green Bay Packers. Welcome to Week 18 of the 2022 season, folks.

After winning four straight, the Packers are in a win-and-in situation. If they beat the Lions they will secure the final NFC wild-card spot. If the Lions win and the Seahawks lose, Detroit will be playing in the postseason for the first time since 2016.