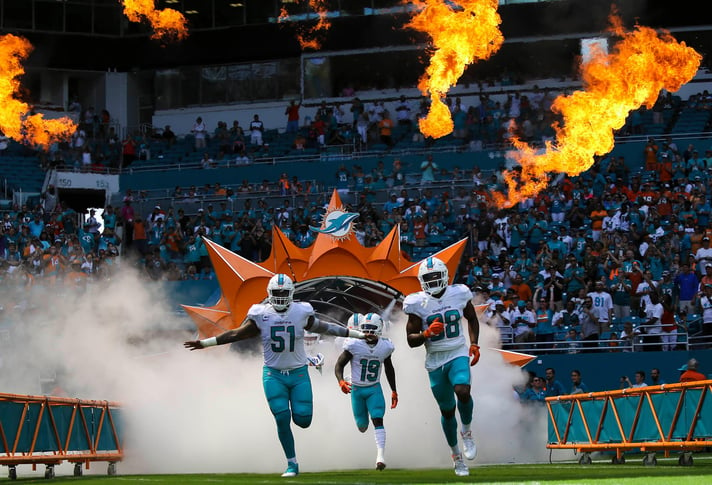 With three weeks in the books, we look ahead to the fourth week of the NFL season and which teams you could look to back at NFL betting sites.

Bookmakers.com is here to guide you through the odds and market lines ahead of Week 4 of the regular season, so you can make the best possible NFL picks at NFL betting apps.

After adding Tyreek Hill and Chase Edmonds, among others, to their ranks, the Miami Dolphins will try to emulate their Week 4 opponents, the Cincinnati Bengals. The Bengals made it to the Super Bowl last season on the back of some blistering offensive play.

The Dolphins couldn't have made a better start to their season after beating Super Bowl favorites, the Buffalo Bills in Week 3 to start 3-0. The Bengals got their first win of the season against the Jets and will hope to push on from there.

Year one of the post-Drew Brees era was a little shaky to say the least for the New Orleans Saints. Week 4 of this season won’t be much easier as they host the Minnesota Vikings, who seem to have everything in place to make a deep run this season.

Jameis Winston has more interceptions than touchdowns through three weeks, which just about sums up how the Saints have started the season. The Minnesota Vikings were a couple of minutes away from a 1-2 start before a late rally against the Lions pushed them to 2-1.

Blink and you might miss this one. Week 4 of the NFL season sees the Detroit Lions host the Seattle Seahawks. This should be a quick game by NFL standards, with each team known more for their rushing prowess than their passing.

Are the Lions much different to their 2021 selves, where they would play hard and get close before losing? Through three games, they have valiantly lost two matchups by a combined seven points and beaten a bad Washington Commanders. The Seattle Seahawks look like they're in for a season of struggle after falling to the Atlanta Falcons in Week 3.

Mitchell Trubisky was the first man up to replace Ben Roethlisberger for the Pittsburgh Steelers. It could be a matter of time before rookie Kenny Pickett replaces him, though. They’re on the road in Week 4 for a game against the New York Jets.

The calls for Pickett are getting louder, but Mike Tomlin and co have so far resisted for the temptation to turn to the first-year signal-caller. The Jets will be hoping Zach Wilson is back for Week 4 after backup Joe Flacco's two-interception performance in the Week 3 loss to the Bengals.

Two mobile quarterbacks will face off in Week 4 when Justin Fields brings his Chicago Bears team to take on the Daniel Jones-led New York Giants. Neither team was a Super Bowl favorite before the season started, but both will be looking for a win in the hope of making a push for the playoffs.

The Giants missed the chance to be the third team standing with an unbeaten start to the season heading into Week 4 but will still hope to beat the Bears and their putrid offense. Fields has 297 total passing yards in three games with just two touchdowns to four picks. However, both teams stand at 2-1 and could use another victory to push towards the postseason come January.

Week 4 sees a huge clash in the AFC South as last season’s AFC No. 1 seed Tennessee Titans travel to take on the Indianapolis Colts. The Colts will be out for revenge after going 0-2 against their rivals last season.

After stinking out the place in their first two weeks, both the Colts and Titans got on the board in Week 3. The Colts rode their luck to a major shock over the Chiefs and will hope that isn't a mirage and can put a second victory together against a Derrick Henry-led offense that hasn't looked its usual self. Is Henry starting to show the wear and tear of the last few seasons?

Justin Herbert and the L.A. Chargers’ electric offense travels to Texas for a Week 4 game against the Houston Texans. The Texans are in the middle of a rebuild and are unlikely to be Super Bowl contenders.

Just how hurt is Justin Herbert? The third-year quarterback is playing with a rib injury and it showed in the Chargers' 38-10 shellacking at the hands of the previously hapless Jacksonville Jaguars Sunday. If he can't play at 100 percent, the team's Super Bowl aspirations could be up in smoke. That shouldn't matter in Week 4 as the poor Texans stand in their way.

The Cleveland Browns and Atlanta Falcons are still finding their feet in Week 4. Each team made a quarterback change this past offseason, which makes this a very intriguing contest.

Until Deshaun Watson makes his bow for the Browns, the team are likely to only go as far as Nick Chubb can carry them. On the evidence of Week 3's win over the Steelers, he could keep them in playoff contention. The Falcons have shown some real fight in their opening three matches and got off the mark in Week 3 with a 27-23 win over the Seahawks.

One of the most bitter rivalries in the NFL resumes in Week 4 when the newly named Washington Commanders take on the Dallas Cowboys. The Cowboys won both games against Washington last season. Can they repeat the feat?

When Dak Prescott went down with a thumb injury, the team's playoff aspirations seemingly went with him. However, backup Cooper Rush has engineered two wins with very few mistakes, and the Cowboys will hope that continues in Week 4. Carson Wentz and the Commanders fell apart in the 24-8 defeat to the Eagles Sunday.

Better things are expected of Jacksonville Jaguars quarterback Trevor Lawrence in his second season. In Week 4, he gets to take on a Philadelphia Eagles team who, having added some offensive pieces this season, are dark horses for the Lombardi Trophy.

Are the Jaguars...good? After years of fumbling through lost seasons, the Jaguars appear to be on the rise. They have won the last two weeks by a combined 62-10 but get a stern test in Week 4. The Eagles are one of only two teams still unbeaten following the drubbing of the Commanders.

Two of this year’s preseason Super Bowl favorites square off in Week 4. The Josh Allen-led Buffalo Bills visit the Baltimore Ravens in a game that should see plenty of quarterback rushing and explosive plays.

The Bills lost their unbeaten tag with a 21-19 defeat to the Dolphins in which they had the ball for over 40 minutes of the game. Allen had 63 passing attempts to Tua Tagovailoa's 18, but they were still on the losing end. The Raven's Lamar Jackson has started the season in MVP form with 749 yards passing, 243 yards rushing and 12 total touchdowns through three weeks.

The Arizona Cardinals hit the road in Week 4 to take on Baker Mayfield, Christian McCaffrey and the Carolina Panthers. Even without DeAndre Hopkins due to suspension, this could be an offensive feast, given the players involved.

Cardinals head coach Kliff Kingsbury could find his seat is warming up after starting the season 1-2. The one game they did win against the Raiders was after a comeback from 20-0 down. Can they find their groove against the Panthers? The Carolina defense showed up in Week 3 to pick off Jameis Winston twice and inspire the team to a first win of the season.

Divisional games are often tight, low scoring games. This AFC West matchup between the Denver Broncos and Las Vegas Raiders is expected to be quite the opposite. With so many offensive weapons on the field, fans and bettors could be in for a treat.

The Raiders have started the season 0-3 for the first time since 2018. They were a two-point conversion away from taking the Titans to overtime in Week 3 after giving up a 20-point lead to the Cards in Week 2. Can they finally get on the board against a Broncos team that looks like it is still getting used to a new quarterback in Russell Wilson?

Two of the NFL’s most successful teams in history will collide in NFL Week 4. Aaron Rodgers and the Green Bay Packers welcome the New England Patriots to Lambeau Field, with both teams looking for a win to boost their hopes of winning another Super Bowl.

It's looking more and more like the Patriots' run to the postseason in 2021 was a outlier as opposed to where the team should be with Mac Jones. Jones has five interceptions to two touchdowns through three weeks and their 1-2 record is slightly flattering. This is probably not the time to face the Green Bay Packers after their defense disposed of the Tampa Bay Buccaneers in Week 3.

We get a repeat of Super Bowl LV in NFL Week 4. The Kansas City Chiefs travel east to take on the Tampa Bay Buccaneers. The Chiefs will be seeking revenge for that Super Bowl loss, when they went down 31-9.

Despite beating their NFC West rivals twice last year, the San Francisco 49ers lost the 2021 NFC Championship game to the L.A. Rams. With home-field advantage, they will aim for a seventh straight regular season win over the Rams.

NFL betting apps appear to be placing a lot of weight in the fact the 49ers are at home, as there doesn't appear to be much other justification for them being favorites against the Rams. The 49ers lost 11-10 to the Broncos to fall to 1-2 on the season, while the Rams have recovered nicely from the opening game loss to the Bills to sit 2-1 and in first place in the NFC West.

Bookmakers.com is the place to be for all your NFL needs this season. Be sure to check out our NFL lineups, NFL player props and NFL picks through every week of the season. Plus you can read our guide on how to bet on the NFL.