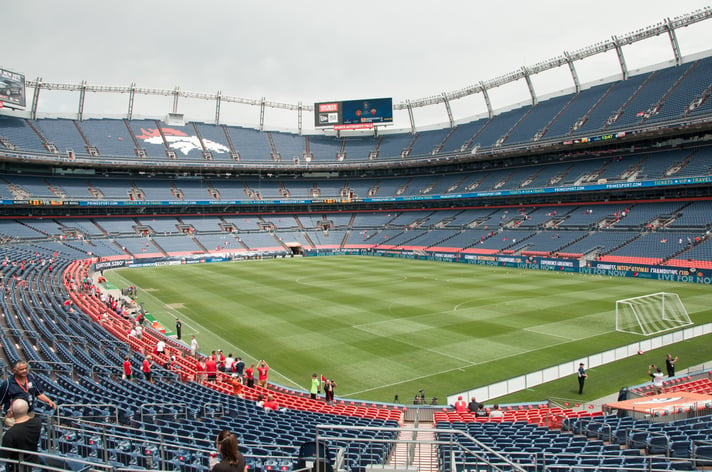 With four weeks in the books, we look ahead to the fifth week of the NFL season and which teams you could look to back at NFL betting sites.

Bookmakers.com is here to guide you through the odds and market lines ahead of Week 5 of the regular season, so you can make the best possible NFL picks at NFL betting apps.

With new starting quarterbacks for each of the Indianapolis Colts and Denver Broncos, expectations were high heading into the season, but things haven't gone completely to plan.

The Colts have one (shocking) win on their resume and three awful performances against AFC South rivals to sit at 1-2-1. The Broncos were supposed to be AFC contenders after trading for Russell Wilson, but they haven't scored more than 23 in a game yet and are third in the AFC West at 2-2.

The New York Giants haven't reached the postseason since 2016 but hopes are high that this could be the season they turn that record around. The Green Bay Packers have only missed the playoffs three times in the last 15 seasons and won't want to add to that number in 2022.

The first four weeks hasn't always been vintage Packers, but they still sport a 3-1 record. The Giants are 3-1 for the first time since 2011 but still somehow sit in third place in the NFC East.

The Jacksonville Jaguars and Houston Texans were the cellar-dwellers of the AFC South last season but will hope for improvement come the end of 2022.

The Jaguars, under head coach Doug Pederson and second-year quarterback Trevor Lawrence, are the NFL's surprise package. They might only be 2-2 on the season, but they currently lead the AFC South and look well on course for their best season since winning the division in 2017. The Texans have been as bad as advertised and look set for a long season.

Year two of the Justin Fields era under a new head coach was supposed to signal better times for the Chicago Bears, but that hasn't quite translated yet. The Minnesota Vikings, also under a new coach, won both games against their NFC North rivals last season.

Justin Fields has 471 total passing yards through four weeks under center, yet the Bears have kept themselves afloat at 2-2. It may be hard for them to do the same against an impressive-looking Vikings that staved off the Saints in London in Week 4.

The Cleveland Browns and Los Angeles Chargers are two of the upstart AFC teams looking to make some noise deep into the playoffs in 2022.

It's tough to know what sort of teams both the Chargers and Browns are four games into this season. If Justin Herbert stays healthy the Chargers could challenge for the AFC West with the Chiefs, but the season could be lost if not. The Browns are treading water until Deshaun Watson returns in Week 11.

In his age-45 season, Tom Brady is looking to become the oldest winner of the Super Bowl with the Tampa Bay Buccaneers. If he's successful he would break his own record from February 2021. They will expect to beat divisional rivals Atlanta Falcons along the way.

The Bucs attempted just six rushes in their Week 4 defeat to Patrick Mahomes and the Chiefs, and they now sit at 2-2 in what is looking increasingly like a weak NFC South this season. The Falcons also moved to 2-2 on the season with a win against the Browns in which quarterback Marcus Mariota completed just seven passes.

With Jameis Winston missing through injury in London, the Saints were able to limit their turnovers, but it still didn't matter in the end as the Vikings saw them off in Week 4. The Seahawks won a high scorer against the Lions on the strength of Geno Smith's arm and Rashaad Penny's legs.

The Detroit Lions haven't made the playoffs since the 2016 season but will be hoping that year two under head coach Dan Campbell can lead them to the postseason. Standing in their way in Week 5 is Bill Belichick and the New England Patriots, who are no strangers to making the postseason having done so 18 times in the 22 years Belichick has been head coach.

Somehow, the Lions look a much-improved team to last season's iteration but are still managing to lose in similar ways. It's making a bad habit out of losing close matches. The Patriots look a little lost at 1-3 on the season and quarterback Mac Jones currently out with an ankle injury. A defeat to the Lions could confirm that.

The Tennessee Titans have reached the playoffs four out of the last five seasons, but could that record be in jeopardy this time around? Carson Wentz and the Washington Commanders will hope to put a dent in their chances in Week 5.

The Titans were limited to 28 yards from 20 total plays in the second half in Week 4, but they still managed to come away with a 24-17 victory over the Colts to join the Jags at the top of the AFC South. The Commanders have scored 18 total points the last two weeks and look a long way removed from their Week 1 win over the Jags.

The Buffalo Bills will hope they can continue running roughshod over their opponents in Week 5 as the Pittsburgh Steelers think about potentially starting rookie Kenny Pickett at quarterback.

It wasn't a vintage performance from the Bills in Week 4, but they outlasted the Ravens 23-20 to move to 3-1 on the season. The Steelers turned to Pickett during the Week 4 loss to the Jets. His only three incompletions were interceptions, so Mike Tomlin has a decision to make at the most important position.

The Miami Dolphins have owned the head-to-head matchups with AFC East rivals, the New York Jets in recent years. They have won eight of the last 10 games, including the last four.

With Zach Wilson back in the Jets lineup for the first time this season, they moved to 2-2 with a win over the pick-happy Steelers. Tua Tagovailoa has been ruled out following a concussion in Week 4. The Dolphins will hope Teddy Bridgewater can still do enough to win the game.

With Jimmy Garoppolo under center for the rest of the season for the San Francisco 49ers, the team has a proven playoff performer at the game's most important position. The same can't be said for the Carolina Panthers.

The 49ers defense stifled the reigning Super Bowl champion Rams on Monday Night Football to move into a four-way tie at the top of the NFC West. The Panthers have shown nothing in the first four weeks of the season that suggest they will be troubling the NFC leaders come the end of the regular season.

Both the Los Angeles Rams and Dallas Cowboys will have had realistic ambitions of a deep playoff run in 2022. The first few weeks has placed that in some doubt, at least for the Cowboys.

Or so we thought when Dak Prescott went down with a thumb injury. However, backup Cooper Rush has led the team to three consecutive wins, and they come into a Week 5 matchup with the Rams red-hot. The Rams were held at bay by the 49ers defense in Week 4 and will hope not to be shackled so much in this matchup.

When the Arizona Cardinals handed the bag to Kyler Murray in the offseason, there would have been an expectation of the team at least making the playoffs. One of the teams potentially standing in their way come January are the Philadelphia Eagles.

The Eagles remain the only team in the NFL still unbeaten through four weeks after a 29-21 victory over the Jaguars. If the Cardinals have another slow start against the Eagles there may not be a way back for them like there was in wins over the Raiders and Panthers this season.

After losing five in a row to their AFC North rivals, the Cincinnati Bengals won both of the matchups against the Baltimore Ravens in 2021 en route to the Super Bowl.

Both the Bengals and Ravens sit atop the AFC North with two wins apiece, so a victory for either this week could have huge repercussions for the postseason come the end of the season. Joe Burrow has looked much more comfortable in the pocket in the last two weeks and will want that to continue to triumph over Lamar Jackson.

The Kansas City Chiefs have won 13 of the last 15 matches with the Las Vegas Raiders, and if they win both again this season that could be curtains for the Raiders' playoff chances.

The Raiders finally got on the board in Week 4 with a win over the Broncos, but they will need even more improvement to overcome the Chiefs. Kansas City's defeat against the Colts in Week 3 looks even more of an outlier after Week 4 and will want to continue rolling against their divisional rivals.

Bookmakers.com is the place to be for all your NFL needs this season. Be sure to check out our NFL lineups, NFL player props and NFL picks through every week of the season. Plus for more information on placing NFL bets, read our guide on how to bet on NFL games.