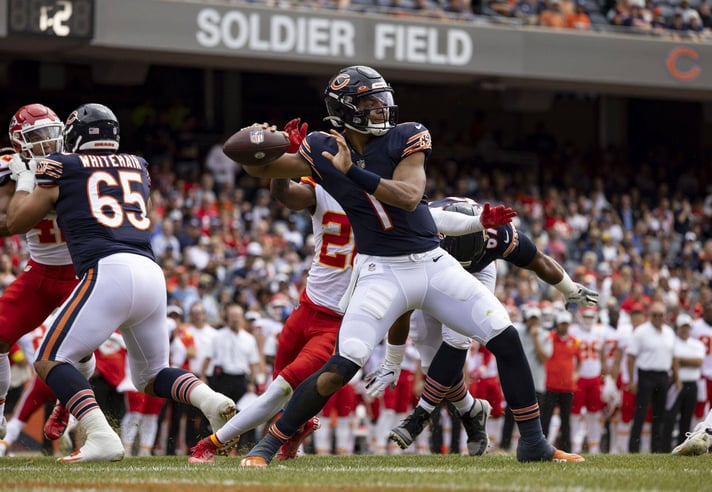 We've gone past the quarter mark in the NFL season and trends are starting to emerge in both the AFC and NFC. With the help of all the odds and betting information, Bookmakers.com looks ahead to the sixth week of the NFL season and which teams you could look to back at NFL betting sites.

Bookmakers.com is here to guide you through the odds and market lines ahead of Week 6 of the regular season, so you can make the best possible NFL picks at NFL betting apps.

The Chicago Bears and Washington Commanders still appear to be trying to figure out the most important position of all. Are Justin Fields and Carson Wentz, respectively, the right choices moving forward. We might find out more in Week 6.

A week after the Colts and Broncos stunk out Thursday Night Football, the 2-3 Bears and 1-4 Commanders will try to improve things for viewers. Commanders coach Ron Rivera directly said this week the quarterback position was the reason his team is bottom of the NFC East, while Fields had his best passing game of the year in Week 5.

The San Francisco 49ers' season was turned upside down when Trey Lance went down with an injury in Week 2. Jimmy Garoppolo has picked up the slack for a team hoping to end up in the postseason. The Atlanta Falcons continue to play hard without much in the win column.

The 49ers trampled over a now coach-less Panthers team in Week 5, while the Falcons kept up their theme of the season of losing but not by many. The calls for rookie signal-caller Desmond Ridder to start will only get louder with each passing week in Atlanta.

The Green Bay Packers have some work to do if they are to qualify for yet another season in the postseason with Aaron Rodgers under center. The New York Jets look more battle-hardened than they have in recent seasons and have provided a stern test for each team they've played.

Will the real Packers please stand up? Are they the team trampled by the Vikings in Week 1 and stymied by the Giants in Week 5, or are they the team that continues to dominate the Bears as in Week 2? The answers to those questions will determine how far they go this season. The Jets have won two in a row and are second in the AFC East with a winning 3-2 record.

Are the Miami Dolphins and Minnesota Vikings both playoff bound this season? Their starts to the season certainly suggest so, and we may find out more in Week 6.

Things were looking rosy for the Dolphins through three weeks with wins against the Ravens and Bills on their resume. They have now lost two in a row and have their first two quarterbacks on the depth chart in concussion protocol. If one of those doesn't return soon, the season could turn ugly. The Vikings held on against the Bears in Week 5 to extend their record to 4-1 to lead the NFC North.

Much of the optimism from the offseason surrounding Mac Jones' second year with the New England Patriots has fizzled out in the early going in 2022. The Cleveland Browns are just about keeping their heads above water with Jacoby Brissett leading the huddle.

With Jones out in Week 5, virtual unknown rookie fourth-rounder Bailey Zappe led the Patriots to a 29-0 win over the Lions. Is a quarterback controversy brewing in New England? The Browns are 2-3 and have lost their three games by a combined six points. If they can win those tight games, they will be in the AFC postseason mix.

The Jacksonville Jaguars stunned the Indianapolis Colts with a shutout victory in Week 2. Can they go on the road and do it again in Week 6?

The Jaguars enjoyed big wins over the Colts and Chargers in Weeks 2 and 3, but they have since dropped two on the trot, including a 13-6 loss to the lowly Texans on Sunday. Can they pull out another shutout against a Colts team that has yet to show it has a coherent offense?

The New Orleans Saints are looking like a team stuck in quarterback purgatory after years of Drew Brees brilliance. At the other end of the spectrum, the Cincinnati Bengals will hope their championship window is firmly open with Joe Burrow under center.

For all the talk in the offseason about protecting Burrow, the team has allowed the fourth-most sacks through five weeks. They need to keep the pocket clean against a Saints team that had three sacks in a thrilling 39-32 shootout win over the Seahawks in Week 5.

The Tampa Bay Buccaneers' Tom Brady will face a Pittsburgh Steelers team not headed by Ben Roethlisberger for the first time in a lot of years. His record against Big Ben was 9-3, and he'll hope to keep that up against the Steelers in Week 6.

The Bucs have had a disappointing season offensively, averaging just 20.6 points a game with the best to ever do it under center. Perhaps facing the Steelers will soothe what ails them after Pittsburgh gave up 38 to lose by 35 points in Week 5 against Buffalo. The Steelers are one of the teams below the Bucs in offensive scoring this year, averaging a measly 15.4 points a contest.

Before the season began, the Baltimore Ravens will have been seen by many as potential Super Bowl contenders, but it's unlikely many outside of East Rutherford would have thought that about the New York Giants. The Giants have made a positive start to the season but face a tough opponent in the Ravens in Week 6.

Hands up who thought the Giants would be 4-1 to start the season with both the Titans and Packers on the docket? Unfortunately, that is still only good enough for third place in the very strong NFC East. Can they keep it up against the AFC North-leading Ravens? The Ravens' record is W-L-W-L-W this season, and they will need to stop that if they want to go deep in the postseason.

The Carolina Panthers looked set for another lost season of going nowhere under head coach Matt Rhule. However, he was relieved of his duties this week, while the Los Angeles Rams lick their wounds following two consecutive losses.

The Rams and Colts have conceded more sacks than any other team in the league this season, and that is having a real detrimental effect on their offense. In their three losses this season, the Rams have combined for just 29 points. The Panthers could be the perfect opponents after they conceded a combined 63 in the last two weeks.

If the Arizona Cardinals don't make the postseason, will it be the end of Kliff Kingsbury's tenure as head coach? If they are to make it, they need to be winning divisional battles against the weak Seattle Seahawks.

We doubt too many people would have Geno Smith as a dark-horse NFL MVP candidate through five weeks, but here we are. He leads the league in completion percentage (75.2) and has a 9-2 touchdown-to-interception ratio. The Cardinals have been losing at half-time in every game this season, and if that continues maybe Smith's accuracy will prevent another comeback.

Week 6 sees a repeat of the AFC divisional round from 2021. On that occasion, Patrick Mahomes and the Kansas City Chiefs got the better of Josh Allen and the Buffalo Bills. Who will come out on top in Week 6?

This is a matchup deserving of the biggest stage. However, since they are AFC opponents, they will never meet in the Super Bowl. This is likely to be a precursor to a mighty matchup in the postseason, and who can draw blood first will be on the minds of all viewers.

Jalen Hurts and the Philadelphia Eagles have started the season very well and could be ready to make some noise in the postseason. One of their biggest rivals for a postseason berth will be the Dallas Cowboys, so victory for either team in Week 6 will be vital come the end of the regular season.

The Eagles put the only undefeated record on the line against their divisional rivals. The Cowboys have gone 4-0 since Cooper Rush took over from Dak Prescott after the latter's injury. The defense has been key to that as they haven't conceded more than 19 points in a game all season. They come up against an Eagles team in the top five in total offense and scoring offense. Something will have to give in Philly on Sunday Night Football.

The Los Angeles Chargers are built to go as far as quarterback Justin Herbert can take them. The same may be true of Russell Wilson and the Denver Broncos. Expect a huge divisional tussle in Week 6.

The Chargers were a missed field goal away from losing to the Browns and slumping to 2-3 on the season, while the Broncos were minutes away from a victory over the Colts before an ill-advised fourth-down attempt from Wilson ended in an interception that led them to 2-3 on the season. If Wilson can't get going, this will be a long five-year contract he and the Broncos will have to endure.